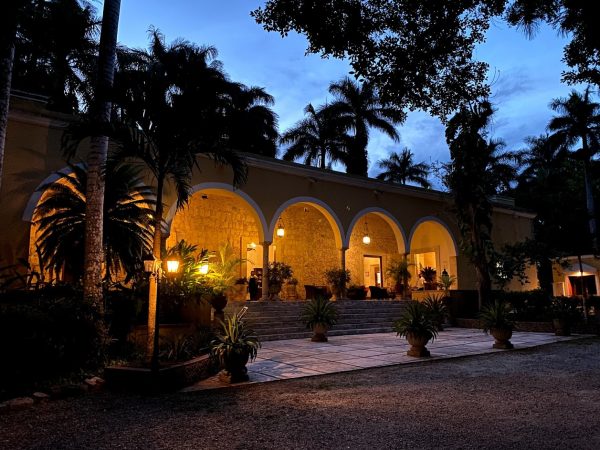 We have never been to Mexico before… So the arrival at Cancun airport did not give us an idea of the crowd levels we were dealing with.  The rental counter at the Hertz took a solid hour from check-in to leaving in a car.  That was a brutal wait after just taking the red-eye and being short on sleep.  Again, this probably contributed to our desire to get out of Cancun to our first hotel ASAP.

Our first stop was a small little hotel outside of Chichen Itza called Hacienda Chichen Resort.  After driving through a series of roads that got smaller and smaller…  and smaller yet.  We pulled up a little gravel road and were in the middle of giant palms and old trees in some kind of ancient courtyard.  A beautifully charming Spanish-style building was sitting wide open to the elements.  This was the lobby where we checked in.  It was cool!  The bellman instantly brought us 4 giant pink martini glass’ed drinks and then ran off with our bags.  This was starting off great! 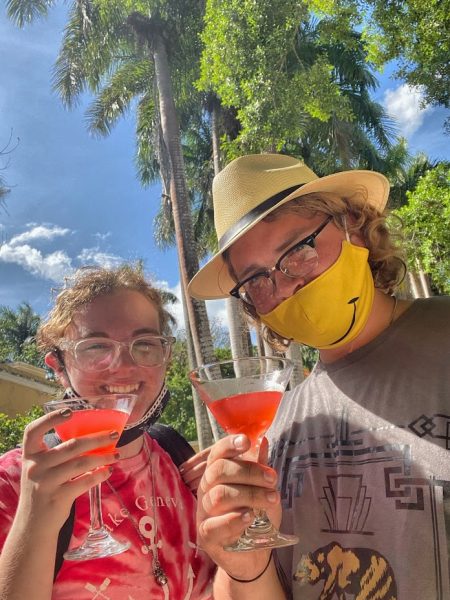 I walked over to the common patio wandering through little raised paths that led to the nice sized pool with NOBODY enjoying it.  I was becoming very impressed with Great Value Vacations selection for our first hotel.

When I got to our hotel room, which was a pair of rooms side by side in a little stucco “cabin” I was again digging on the jungle vibe.  Outdoor seating and hammocks.  Ang said instantly to me…  “No Air Conditioning”.  Most people would go “No Way!”…  But I have stayed enough places in the world to know that American values on AC are not the norm when it comes to HVAC.  She then took me to the closet with the dehumidifier that was turned off.  She said, “I guess this will help”?  I went over to the kid’s room and looked around.  Same conversation… Kids were OK with no AC.  We were in a foreign land and they are flexible.

I love my wife and kids.  They were completely content with a night of terrible sleep… Or they were flat-out exhausted from the flight.  All of them were ready to sleep in June… in the Mexican jungle…  With no AC.  Troopers!

Fortunately for them…  I showed them both the AC units on the walls above the entry doors in both rooms.  They were turned off..  But once turned on, the rooms started cooling down nicely.  I sure as hell wanted AC! 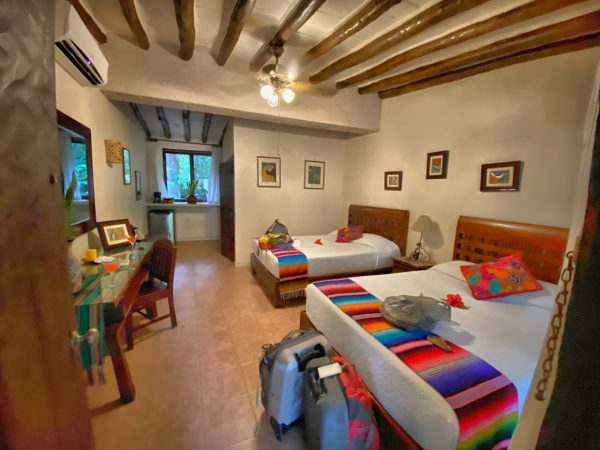 Dinner was from 5:30 to 9… But the hotel staff had asked if we could eat earlier than later.  That was fine.  We were bushed.  The reason they wanted us to eat earlier?  We were one of two reservations for that night.  I have no idea how many people this little hotel can hold… But its a lot more than 6!  We asked if this was normal…  And the clerk said it’s been like this with COVID.  Regardless of low customer numbers…  These guys laid out an amazing dinner with slow-roasted pork, lime soup, and some great drinks for the girls.  It was top-notch dining in the middle of nowhere for a table of 4.  The only table being used in the entire restaurant.  The next day, breakfast was the same level of service.  Our trip  with Great Value came with “American Breakfasts” every day.  Fruit plates, eggs, meat, and pancakes if wanted.  (by the 4th day…I had to have a pancake!)

One thing I will mention about this hotel…  They have some pretty good gaps under the hand-hewn rustic doors of your room.  When the lights are on in your room at night…  You get a lot of unwelcome visitors in the room.  I figured this out pretty quickly and tucked a bathroom towel at the base of the door.  It worked pretty well.  When I opened the door in the morning, I am not lying by saying that there were dozens of dead beetles and such at the base of the door.  One guy that did make it in, or was already there was a weirdo spider thing that was nestled in the corning of the walk-in shower.  He was a lot quicker than I initially gave him credit for.  He sidestepped my flip-flop a few times before his expiration.

We loved this hotel and the staff for the few hours we got to know them.  This level of service was not the norm for the entire trip.  But the lack of other guests at hotels while far away from Cancun a recurring theme.

The next day… We were literally 5 minutes from the Chichen Itza ruins.  We were able to get there at opening and get lots of great views without crowds.  We did pass on getting a guide.  I am still torn on whether we needed one.  I have watched a lot of docs on the subjects of the Mayan movements and periods.  I was familiar with what I was seeing.  But, we did not get a map of the ruins at check-in as you would at most American parks…  So, we were a little lost a few times trying to follow trails that had been shut down.  Annoying, but not the end of the world.  I had my 10000 steps early that day!