I really don’t know where to start…  So, I will do this with some thoughts and notes and see what fleshes out!

The Trip idea.  Why Mexico?

This was supposed to be our trip to Rome in 2020…  Thanks to COVID… That didn’t happen.  I booked the trip again for May of 2021 and that trio got canceled.  In a fit of “we are going somewhere” rage…  Ang and I sat on the couch and booked this trip with Great Value Vacations.  The same company we have used before.  They have a lot of trips that include airfare, car, and hotels.  All the while, you are not trapped on a bus or stuck with a bunch of other people.  No offense if that’s your thing…  It’s just not ours.

We had paid for trip insurance… A few times over, unfortunately…  So I was already 400 bucks in the hole with Great Value Vacations.  I was kinda ok with that…. until they offered free trip insurance on everyone’s trips after I canceled my trip.  Some anger set in at that point.

I have learned one thing when traveling internationally…  The rental cars always have a shell game with insurance programs when you arrive.  I played this game in Scotland and Ireland.  In Ireland, I got a rebate for overpaying at Dan Dooley.  You gotta watch those guys!

Mexico is actually worse… Kinda.  I say kinda because nothing in your United States insurance will transfer across the border.  So, that’s not confusing at all.  You are on your own.  At that point, you have to decide what level of insurance you want.  I, not knowing a thing about Mexican driving, decided to take the most fearful plan.  I covered myself from all accountability!  60 bucks a day insurance.

Our reservation listed a Chevy Aveo.  Usually… When you get to a rental counter, you find out that this is just a listing for size and you can get something like a nissan or VW.  (I’ve only had one Toyota rental in my entire life, a Previa in the UK).  Nope, I got an Aveo.  The petite bowtied car was a newer model and only had 7000 miles.  The car had a major “tick” that bugged me for the entire trip.  The steering wheel holds “center” like its stuck.  It was so much so that you get the whole car jerking when you try to make small corrections to the direction of the car on the highway.  Also, we had brought along an FM modulator for play GPS and music.  That radio was trash, it wavered back and forth like the alternator was barely hanging on!  We used a USB cord instead.  Oh…  And NO Cruise Control.  I drove 1000 kilometers with NO cruise!  Between the steering and the accelerator up and down…  I’m surprised the other occupants of the car did not need Dramamine.

We were fearful upon departure of roadblocks and gang shootings being a real-life hazard on our drive across the countryside.  Hardly.  There were lots of police trucks and a few checkpoints across the interstate as we headed towards chitzen itza.  But nothing scary.  One time we did make a weird turn on a gravel road and found a few guys sitting with a chain across the road.  This was literally on hour one of our drives.  I did a u-turn and left that road.

That problem popped up because we did not have pesos for the toll road.  We knew there was a toll road… But we did not realize that leaving the Cancun airport by GPS guidance would take us quickly out of modern civilization.  There is not much but jungle and a ribbon of road in that section of the country heading away from the beach.

We left the airport in Cancun and were driving for an hour to our first hotel and started seeing signs for the toll road.  We knew this was going to happen… But we also knew that this was a very new road.  We assumed…  foolishly… that a credit card would get us through.  And if not, an ATM would be nearby.  Wrong and wrong!

We drove an hour to the toll plaza and ran into a “humored” toll booth clerk who said “No Peso’s…  Go back to Cancun because there are no ATM’s anywhere near.”  We followed the directions and hit another clerk at the return booth who kind-of understood our situation.  He brought over a friend who was better with English who proposed that he could take money from Paypal and pay our toll.  I was totally skeptical when he started talking about so many pesos…  But then Summer assured me we were talking about 14 bucks.  Thank God for this saint.  We were wrung out from our midnight flight and it was nearly noon in the middle of nowhere.  If not for his kindness, I would have probably had a freakout on some ATM in Cancun.

We took the first exit and ended up at a small town called Valladolid.  This was a hilarious attempt at understanding that the Peso and the dollar share the “$” symbol.  Aiden and I saw the ATM fee of $75.00 and instantly took our ATM card back.  We can’t pay that!!!  We then started doing math.  Hard for us.  And we took out 600 pesos.  Thinking that this amount would last FOREVER.  Turns out…  We barely got past lunch.  600 Pesos amounted to about 30 bucks US.

It took us about 4 visits to various ATMs before I pulled out $6000 and figured that would cover us for the rest of the trip.

We used Pesos for tips, quick market stops, and more tolls.  Also… Whenever you want to haggle with a souvenir booth owner…  Pesos or dollars rule.  No credit cards.

If I get to it… I will talk about each hotel and site we visited… But I did want to make one central point about our trip.  It was the small roads and the small towns that stole my heart.  Just like here in the US, the Mexican government has decided that interstates with central fuel and food along the route are more practical (probably safer as well) for travelers.  But it stunk of I80 from Ohio to Pennsylvania.  You are trapped on a road and missed the local cultures and small towns.  Do I sound like the theme of Cars yet?

When we found an archeological site that warranted a drive off the main roads…  I would drive on concrete paved roads that were about a lane and a half wide with the jungle closing in on both sides.  (My data was working because that was a feature on 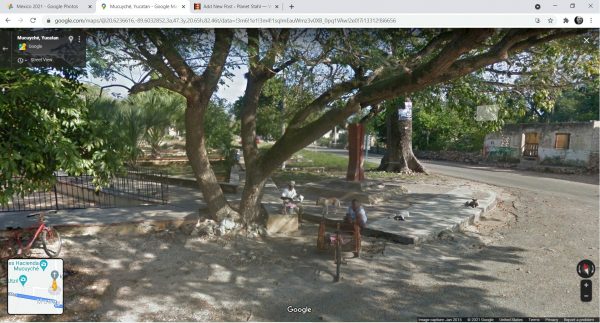 my Verizon plan…  So we did have GPS the whole time).  We would come into a small town and immediately be slowed down by MASSIVE speed bumps.  They are not messing around with slowing down cars driving through town.

The picture to the right is a pretty accurate idea of what you would see.  This is a google maps street view of a town we saw on our way from Uxmal to Merida.  We would creep through slowly in these towns looking everything over for anything worth seeing.

Nobody paid us any attention.  Even when we stopped at town squares…  Most people gave us no mind.  Those pesky shop owners though.  They have a great line they all say: “Almost free!” when pointing towards their wares.

The trinkets and trash that are sold by 90% of the vendors is near identical to each other.  This was something that became apparent after about 5 minutes into Chichen Itza.  It was actually sad to see all these folks setting up booths with plastic and molded items that were obviously made in China.  It started to make me think that folks were sent out by the same person with a goad to make a few bucks a day.  I shuddered to think about tourists looking at the repetitive items and buying one of them.  Then again… I could just be a snob!

That whole… “You’ll have everything stolen” mentality limited what I brought on the trip.

I was OK with not taking my DSLR… As its does not travel well with extra lenses and let’s be honest…  My iPhone 11 pro takes some pretty good pics.

My laptop would have been a burden to transport.  But not bringing my iPad and keyboard was a mistake.  I did bring a new issue of Granta to keep me busy at night.  But really, I write more than I read.  If I would have had an outlet for it, I would have spent every night making some notes about the day’s travels.  My iPhone does not get it done when it comes to writing!  Maybe I should have gotten the big phone for these old finger and eyes?