When you think about politics… Especially local politics…  The first thing that comes to mind is probably the ubiquitous campaign signs that litter everyone’s yards all the way up to election.

As a candidate for County Board Chair… I knew that spreading my name far and wide would take a large investment in signs.  Lets face it, as an underdog, your either going to spend money on TV, Radio, Internet or signs.  The first three are paid by the minute, view or click…  The yard signs kind of stick around and tend to make you feel like you are getting the most bang for the buck. 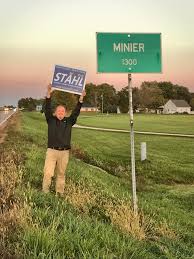 I picked up 150 signs from Screen Graphics in Pekin and have purchased all the stakes from Amazon Prime.   I know that every time I plop one of these guys down in the ground, I am investing  5 bucks into the location selected.  I don’t take it lightly.

You can get a lot of traction asking for sign locations from friends, family and co-workers.  I think I unloaded my first 60 that way.  I was thrilled if the location was  on a busy road!   But, that was usually not the case.

After you have sucked all the generosity out of your friends…  You get some supporters who message asking for signs.  There was one night where Angela and I drove to Washington and dropped off one sign and then headed to Delavan to place another at Venado Lakes!  No lie, the next day, we did it all again because of new requests to the Facebook page.   This took out another 30 or so over the past few weeks.

Eventually… As the election looms ahead…  You have to start placing on busy intersections and take some risks.  As a Libertarian, I am all for private property rights and it weighs on me to place a sign in a location that I was not given express permission.  But, there are some spots…  Where those signs for “stump grinders”, “work from home” and “weight watchers” sit… For months… And you say “What the Heck”.  You dive in with them!

Busy intersections…  T-Intersections and highly trafficked county roads are ideal.  We have placed 20 or so this way and put them in places were we can see if they are still in place.   Ultimately, during most elections… You would see political signs really popping up near election time.  But we have a problem this year.  Early voting has created a scenario where 20% of the voters have already hit the polls via mail-in or early voting at the courthouse.  Voters have already cast their decision and I have have not even gotten my last ditch marketing in the ground.  Thanks COVID!

As a Boy Scout Leader and a steward of  the “Leave No Trace” philosophy we made it a point to document where every sign was placed.  These plastic signs with metal legs have the ability to pollute the landscape for years if they are left unattended after the election.  So, we will grab them all and do our part for the environment when the election is over.

Unfortunately…  Some of have gone missing!

I did place one at the Tazewell County line on Rt9 a few weeks ago, and it was gone a week later when I drove by.  Angela pointed out that it was next to someone’s driveway.  I didn’t even see it when I placed the sign or I probably would have never left it. (again, 5 bucks is 5 bucks!)  But other signs mysteriously disappear.  When a friend tells you that the sign on their property walked away… And then others report the same thing…  You have to wonder what is going on!  Is this a concerted effort?  Do some people believe that my sign does not have a right to be seen?  And then there was the mowed over sign that was right next to a telephone/light pole on RT150.  I would like to believe that the road commissioner at that location came around the turn and just didn’t see it.  That saves me from thinking it was his goal to destroy my campaign material.

Regardless… I made it my goal to clean up the mess… And attempt to leave no trace.  I got out of my truck… Scooped up all the bits and pieces I could find at the busy intersection.   Then I grabbed a brand new sign and post…and stabbed it into the ground!

We got 2 weeks left!  Lets not waste a prime location and advertisement for the campaign!