A few years ago I had a brilliant trip abroad to the Eastern countryside of England… The Cotswolds. Every preconceived notion I had about England and food were shattered on that trip… We walked between villages during the day and stopped at local pubs to grab a great beer and a bite. At night… These same pubs would turn their menu into a fine dining experience. Great local beers and awesome local meat and produce all worked together to provide some of the best meals of my life!

I left the English countryside content that this type of establishment will never be reproduced in Central Illinois. If its not all you can eat walleye or fried chicken… What chance could it have? 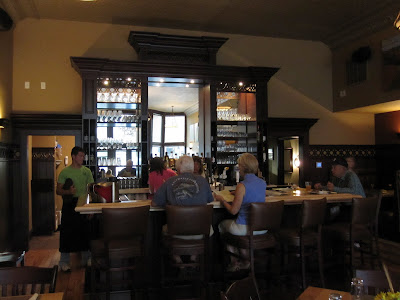 5 years ago… If you would have recommended a small Central Illinois town as a great place to have near gourmet food and craft beer… I would have laughed off this blog!

Then someone recommends this new restaurant in Delavan… The Harvest Cafe.

Delavan is a small town tucked away off some country roads between Peoria and Springfield IL. Its one of the countless towns that dot the Central Illinois landscape with populations of under 2000 people. Communities this small usually pride themselves on whether they have a Casey’s General Store or not!

So, you can imagine my trepidation when I started hearing rumors of a great dining restaurant in Delavan. No slam on the town… But, I was really expecting to hear about awesome fried chicken or some deep fried appetizer!

The Harvest Cafe is the latest addition to downtown Delavan. A downtown, that like many small rural towns is struggling to keep vital and alive. 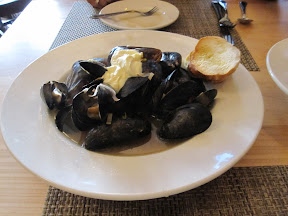 We snuck in for breakfast a few weeks ago… Just to get an idea of what was going on. To my pleasant surprise… We were greeted by a beautifully restored exterior. It would have made 1910 Delavan as proud as the 2010 population. The interior is more modern, but had some classic touches to remind you that you are in an old building.

Breakfast turned out great. I had some Cajun grits with shrimp. Ang had some biscuits and gravy. Summer was overloaded with 2 of the biggest pancakes she has ever seen in her life! They were served with a side of amazingly flavorful sausage.

We asked for a dinner menu, just to get an idea of what might be in store if we came by later. After checking the menu over… It was decided that a future dinner was probably in order.

Breakfast for the family and grandmother was a healthy 40 bucks. I was a little put off by the price for a breakfast. But, if it were Bob Evans in Pekin… Would it have been any less? Probably not. 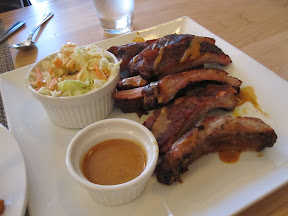 Ang found it very ironic that we would be heading to Delavan for our anniversary dinner… After all… We have made a habit of driving to more upscale establishments in Peoria and Bloomington over the years for that one evening a year without the kids. Jonahs, The Fish House, Alexanders, Kobe etc are the normal haunts.

It was a Thursday night… So, I was not surprised to see that they had plenty of places to sit. We grabbed a table off to the side and quickly ordered some beer and a Blue Moon mussel appetizer. Holy smokes! The mussels were a bargain for the portion, and had some kind of amazing lemon cream sauce. I mean amazing! Very nice.

The beer on draft was Goose Island Matlida. Yes, Matilda! That’s something special when you see it on Kelleher’s epic tap list in Peoria. The Matilda was served in a pint glass that was frosted. I was half tempted to say something to the waitress… But she looked really young and I thought it might be more hassle to explain about the glassware than it was worth. (Frosted glasses should be saved for the Bud and Miller drinkers. Reducing the temp of a good craft beer actually takes away from the flavors and esters that make craft beer great)

For dinner, the wife and I split a rack of ribs and one of the Italian themed pizza’s. The ribs were already cut, so we didn’t get all messy eating them. You could tell the ribs were slow cooked in some fashion, the menu was kinda vague on those details. They were served with a splash of a spicy mustard and some homemade slaw. Overall they were delicious.

The pizza was good. The slices of prosciutto were generous and gave the “za” a little more flare. 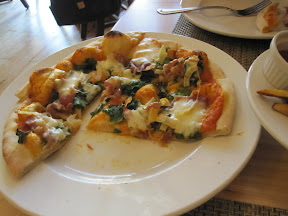 I ordered the other Goose Island beer they had on draft, Pierre Jacques. This time asking the waitress to hold the frosted mug. Ahhhhh… That was much better.

Desert would have been overkill. They had an offering of cobblers and pies that sounded great. But we were already going to be taking food home as it was!

As we sat and picked at this mass of food… We became more and more convinced on how needed this place was in a small town like Delavan.

When the check arrived… I had to do a double take. We ate like royalty… Ordered tremendous food and drinks… And were left with a very reasonable bill of 40 bucks. Far less than our average on Anniversaries past. You know, if we had gone to Peoria for this same dinner… It would have been 80.00 to 100.00 for the 2 of us.

At this point… I am sold on going Delavan for some great food and drink. Will we ever get to that point where every town has a “pub” like this? I can only hope! You see all these trends for folks eating more local and fresh food… It seems odd that areas like ours that are surrounded by it are the last ones to catch on!

Cheers to The Harvest Cafe! Its worth the trip! Get down to Delavan!

Side notes: First, let me just say that I am NOT a food critic by any stretch. But I really felt that this is a place that should be shared and celebrated. After seeing great places come and go over the years… You have to try and support the ones that are truly special.

Minus: (I really had to dig to find much to complain about)