The windows did not show up on Wednesday like the contractor’s had hoped… So, they wrapped the area up with Tyvec in the mean time.  Its like a cave in our kitchen right now!  Hopefully, next Wednesday, I will have lots of pictures to show off!

Went down to Springfield and visited the Leahy’s.  FINALLY!!!  We are bad friends!  Actually…  After my kids were there for 90 minutes, they were lucky something was not broken, or that all the kids were not crying!  Ronyn is a cutie!  I have a hard time believing my animals were that small!

We lost our camera for a few days…  So, I will get those pics of our visit up soon. 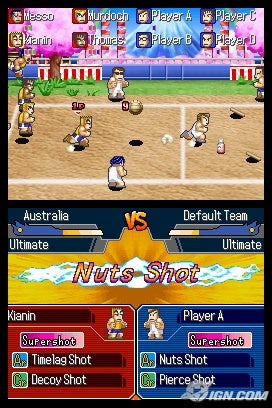 Summer had a great birthday.  Ang and I got her a Nintendo DS…  She has been playing “bunnies” on it.  Which is great… Its like having a pet, but you don’t have to clean up after it.  I was also glad to see that my all-time favorite game from the old Nintendo days is now out on DS.  SUPER DODGE BALL!

Dan and I played this game for a year straight when we first moved to Florida back in the early 90’s.  I believe “Sam” was the guy with the killer throw.

I dont remember it to clearly.. But Leahy said we used to play it with Steele.  And that would make sense…  Although I must have gotten my but handed to me enough that I have repressed it!

The ankle is pretty walkable now.  No pain after being on it all day.  It does not roll the side… And I still cant run or trot without a big limp.  So, we are still a work in progress.

The left side controller of the mower does not work correctly… Its a Zero Turn Radius style mower (called ZTR from this point) and you have to use levers forward and back for each wheel.  Kinda like a Bobcat.  Anyway, the left side will not go half as fast as the right, and it has kicked a belt a few times.  (I have to put belts on this thing twice a year!!!)  So, I turned it in to A to Z rentals in Pekin last Friday (They picked it up).  It needs this belt thing figured out, needed a new battery, and had a flat tire!

This being the peak time of year to mow…  Of course I am anxious…  Well, they still dont have it fixed a week later!!!  And they dont know whats wrong with it!

Can someone say “Screw Cub Cadet”?