We were thrilled this morning that our first appointment was at 11 am.  That meant Summer could relax and sleep in.  No stress yadda yadda. 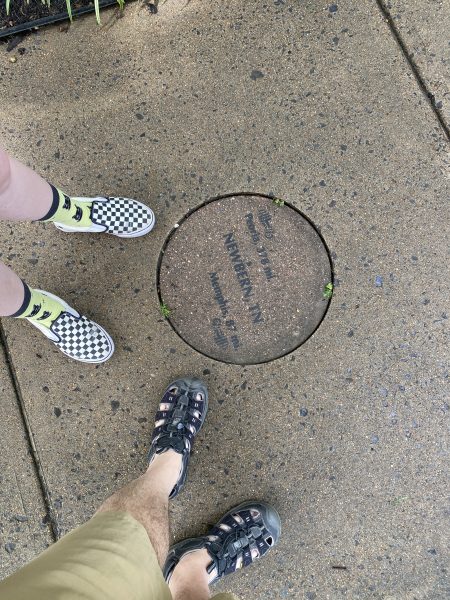 I got up…  Got ready for the day and got my cup of coffee on the 1st floor.  While downstairs the coffee attendant asked if I wanted anything else.  I am totally in the food experimental mood with Summer..  So I asked her for some cinnamon rolls.  She said she had “Mini Cinns” and the kids seem to love them.  I grabbed a pack and brought them upstairs.

I ran out of eggs yesterday, but since I am down to my final days I don’t want to go shopping and have food in the fridge that nobody else will use.  I decided on a bowl of cereal.  After eating some honey granola thing…  I felt bloated and disgusting!  Yuck.  I like my egg and spinach better!

Eventually, Summer got up and showed off that amazing haircut.  It’s not as bad as you might think.  Think Sound of Music, Julie Andrews meets 11 from Stranger things.  It could be a lot worse.  Last night after I got done with the captain’s log, Summer came out and asked me if there were some uneven spots.  Honestly, I was amazed at how evenly it was cut.  I touched up the back of her neck and tried to make a straight-ish line. 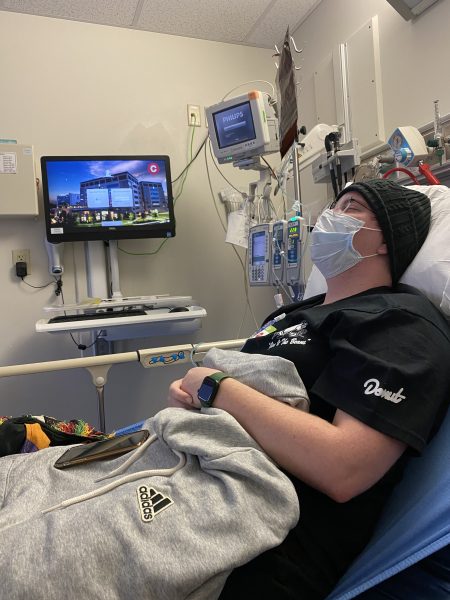 I told her that I had the Mini Cinns and she was thrilled.  Apparently, these things were a valued commodity at DeeMack HS.  I warmed it up for a few seconds and this led to a brief conversation about how my daughter never warms up anything???  Lukewarm oatmeal was a warning.  Pop Tart’s cold seemed OK.  But now I think she never takes the 30 seconds needed to enjoy flavors in this processed garbage food!  She ate all the “Cinns”.

I was working on payroll stuff and it was horribly overcast outside.  I didn’t even notice that the clock had ticked up to 10:50!!!  Whoops!  I actually got her to move fast and we headed to St. Jude.  We got to Chemo late, but they are never on time anyway.  They did get her out with 5 minutes to spare for her youth group.  This is one meeting she wants to be on time for every week.  She has a few friends now that she hopes to see every week.  She did say she tried to make friends with the guy on our floor… But he doesn’t respond to conversation.   I left her alone and talked to my Toyota guy in Chicago in the waiting room.  I hate talking business in these waiting rooms… It feels like everyone is listening.  Plus, I am half deaf, so I am told I talk to loud anyway!

Summer told me today that she wanted me to eat real food at lunch.  How can she be expected to eat real food when I sit there and eat a salad every day?  I believe it’s flawed logic, but I played along.  Summer got a cheeseburger and I got chicken strips.  It was delicious… But I don’t think I saw her eat much more than normal.  I cannot do this every day!

We got into radiation at our scheduled time of 1:30 PM today…   But somehow did not get done till 4?!?!?  I swear I can’t get any traction in the radiation area. Summer said the radiation therapist asked if she got a haircut.  She was shocked at his lack of observation.  He sees her every day.  I asked her if a bunch of hair fell out of her new hat when she got undressed for radiation. She said it rained hair.  I said that’s gross…  She said there is so much hair in the radiation area that it is beyond getting grossed out by!

We headed back to Target House and went to collect mail.  Finally, her iPhone showed up, so she spent a chunk of tonight working on that.  She also ate half of a meatball sub for dinner. 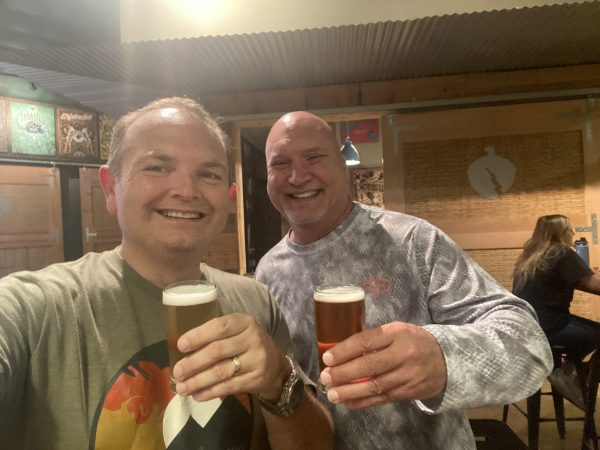 I did leave her alone for an hour while I caught up with Bob (Bonus Beer Bob!) from The Good Beer Show podcast.  The Good Beer Show is long gone, but Bob and I have shared some serious memories eons ago at Great Taste of the Midwest and when The Beer Report drove to Muncie (it rhymes with Funcie) Indiana for an episode.  We met at WiseAcre brewing and had a flight of local beers.  I hate to say it… But they were average! Sorry, Memphis!  I was hoping for more…  But they were mediocre.  Bob felt the same way.  We were in full beer snob mode.

Oh, Summer was ecstatic that I left her alone for a bit.  (I have run out to get food etc before, but that’s usually 10 to 20 minutes) When I got home, she had me set up the Bluray player in her room so she could watch Fantastic Mr. Fox.  This Wed Anderson movie is her least favorite, and she wants to watch it a few times and see if she is missing something.

Then I will attempt to clean the house so we can blow out of here Friday (if Gajjar allows it!).  If it all works out…  I will drive Summer to Carbondale for the weekend.  I’ll head back to Tremont and my shift is essentially over.  Sylvia will pick Summer up on Sunday and take her back down to Memphis.

I will be at work, bright and shiny on Saturday and then I will try to make one of the Lemonade stands for Carson Ladage’s Lemonade Raid at Kroger in Pekin, Morton, EP and Normal.