Summer loves the young adult group at St. Jude.  They have another adventure this week!  Dad captures it well on his Wednesday report. 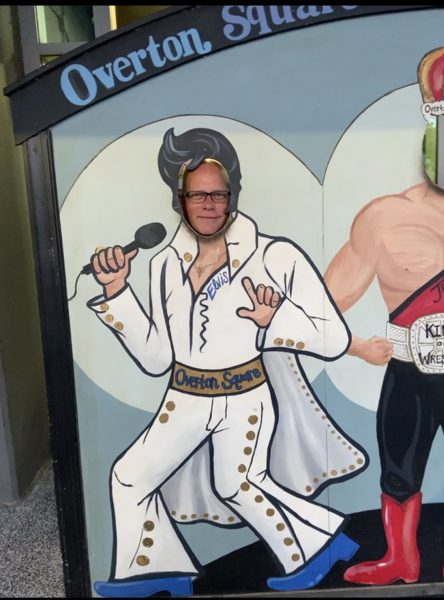 St. Jude – Wednesday.
We are in for the evening and Summer has labs at 7:00 am, so decided to write today’s update now. Summer’s first appointment today was at 10:30. She was happy she got to sleep in a little later today. We found a good parking space again, so the walk in was quick and easy. She started the day with chemo. She had a different nurse today who was also very sweet and friendly to all of us. This nurse asked Summer a lot of questions about how her chemo treatments were going and how badly she felt the side affects from it. Summer told her that she really was feeling pretty much ok, and that she really was not needing to take any anti nausea medication. The nurse told Summer that she must be one if the lucky ones to be this far into treatment and still be able to eat and keep everything down. Julie and I took that as a big positive.
When she finished, we went to the cafeteria and had lunch. It was busy, but we found a table and sat down. In a couple of minutes, a young couple came to a table close to us with their son (probably about 3 years old) who was attached to an IV bag on a pole that they were wheeling next to him. The little boy was really cute. He had big brown eyes and a happy smile. He must have been taking chemo treatments for awhile as he (like Summer) had no hair on his head. I could see them getting settled, but Julie and Summer had their backs to the little boy. The boy kept staring over at our table, and then started calling “Hey! Hey! Hey Jaime!” His parents tried to get him to be quiet, but he kept calling out louder. I told Summer that I thought he was calling to her. She turned around to look at him. He stopped calling out and sat down. The boys Dad told me that his son thought Summer looked like his friend Jaime that he had seen a little earlier. I immediately made the assumption it was because Summer didn’t have hair. His Dad went on to tell me that Jaime was wearing a pink sweatshirt very similar to the one Summer had on, and that’s why he was calling to her. At that moment I realized that children really do see people with different eyes. How wonderful is that…
Next was Summer’s Child Life Group Visit. This appointment is once a week where Summer meets with other patients close to her age to talk, hang out, and do some fun activities together. Summer looks forward to seeing her new friends at this meeting. After an hour, Summer came back out of the meeting, and we headed to her radiation appointment. On the way, we asked her what they did for fun this week. She told us they made “shrinky dinks”. I know this is a craft that is typically for younger ages, but whatever, as long as they had a good time. I asked how hers turned out. She told us that there wasn’t an oven in the room to heat up the “shrinky dinks”, so they put them in the Easy Bake Oven that was available. They got stuck inside it and they couldn’t get them out, no matter what they tried! Their doctor had them throw the whole thing in the trash!!! How does a group of 20 some year olds destroy an East Bake Oven under the direction of a doctor in less than an hour???!!! I said “Only YOU, Summer, could create that much chaos so quickly!” It was the best laugh of the day!
Radiation was the final appointment for the day. Summer was in and out fairly quickly today. We drove to a fun candy store Summer had been to and had ice cream treats. Then back to Target House.
Summer wanted to rest for a bit before we went to dinner. It was a beautiful day here, so Julie and I headed out to the patio for awhile to enjoy the sun. On our way down, we met a Dad who was finishing his move in to Target House with his 19 year old son. He told us his boy had just had his right leg amputated from the mid thigh on Monday, so they would be here for awhile for treatments. The cancer was too bad and the doctors couldn’t save the leg. Again, the reality of being here came right to the front again.
We gave Summer till 6:00, then went back upstairs. I stuck my head into her room and said “Your worst nightmares are back!”. Her response…”oh, is Dad here?”

I love this kid!
We went out to Bobaloo’s and had lamb sliders. Jule had tacos. Summer ate fairly well tonight. Another good day here in Memphis.