A great post.  Sylvia eavesdrops on some other patients around St. Jude while waiting on Summer.  I have witnessed everything she is talking about and it starts to seem mundane after a few weeks but I remember how sad/inspirational/sad/optimistic it all was when I arrived.  Yes, I said sad twice.  There is sadness whenever you hear or see kids in pain or hurting. 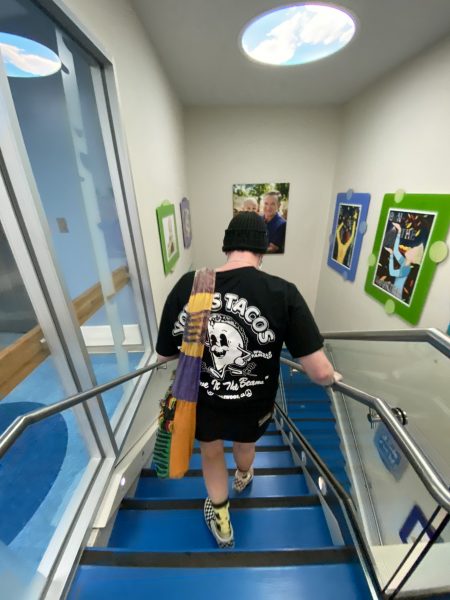 Memphis Day 3 – A pretty uneventful day, but I did get to sit in THREE new waiting rooms. First of the new ones was for OT. She brightened up many people’s day with her Where’s Waldo Vans that she wore specifically for her therapist. Summer said tonight she is definitely seeing a difference with OT and PT with her balance getting better, which is nice.
New Waiting Room #2 was for plastics right after OT. I didn’t go in, but was told there wasn’t much new. There are things that can help with the nerve damage, but long term nerve regrow isn’t really going to be able happen until after chemo is over, so surgery will have to wait. Bummer, but not unexpected.
What was interesting about this particular stop, though, is I got to see two people who were just back for long term study follow-ups. I overheard a young woman say she first started coming to St. Jude in 2003 when she was just 6 (had to come back a second time), but is fine now (didn’t catch what she had, but might have been leukemia). The second young lady got a little loud with one of the nurses compared to the usual soft and hushed voices, and I really wasn’t sure what was happening at first. It actually crossed my mind that security might get called. Then, the nurse came out from behind the desk and she gave her a huge long hug. The first woman did the same a little while later when a different nurse came into the room, telling the people close to her, “She was my favorite nurse when I was here.” That’s such a great testament to the staff. To me, it doesn’t feel like Summer has been here that long, but she rarely needs to give her name anywhere when checking in for an appointment – they just know her. And there are (unfortunately) so many patients! It’s always busy, so they must make an effort to remember people and really care. You know she is working with staff who are truly invested in their jobs, which is comforting when so much is at stake.
After that we headed to chemo and then the cafeteria. Lunch was some pretty good tilapia, rice, and squash. At least I had the squash. Summer passed on that, but substituted cherry pie, which she said wasn’t great, but she still nearly finished it. Fun fact I found out: Summer enjoys pie crusts. That’s the total opposite of me, but I know to not skimp on that when I bake for her again.
Then, it was time for her Young Adult/Older Kid group meeting, land I experienced New Waiting Room #3 (I’ve passed it, but had yet to try the chairs myself) while they made slime and I worked some more.
Once that was over we were off to radiation and got in and out pretty quickly. “Paul Blart Mall Cop” was on when I got there (meh), but then they put on “Transformers: Bumble Bee,” which was better. Love the use of 80’s music in that one.
We came back to Target House, but not before I drove around the block a few times due to construction and missing the turn in. I would like to blame my screw up on the fact that traffic was crazy due to the school next door being let out at the same time, which threw me off, but I just really have a terrible sense of direction. We eventually made it, though. Summer hung out in her room for a couple hours and I finished up some work.
Tonight we watched “Moonrise Kingdom” and “The Corpse Bride.” It was pretty low-key as I think we’re both still tired from being up late last night (at least I am). Tomorrow morning starts early with labs here at Target House and then tomorrow night we need to start getting the place ready for Grammy and Grampy next week. It’s crazy that my stay is already half way over! It’s flown by, but in a good way. 10/10 would definitely stay again if Summer (and Eric Stahl and Angela Stahl) need me.