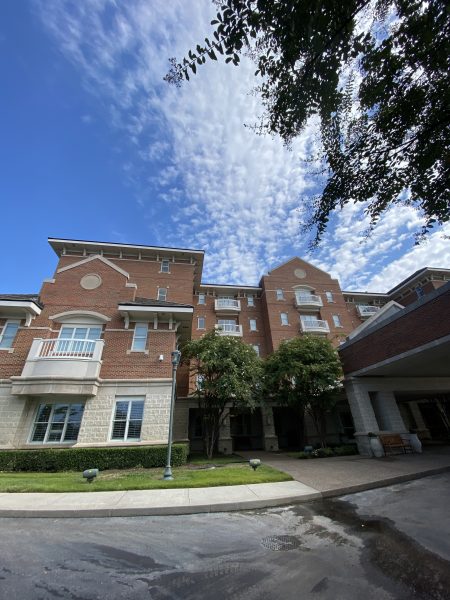 We had an early start with labs downstairs at Target House at 7:00. Luckily, it was quick and we were back upstairs in just a few minutes. It’s awesome that they offer that service onsite. Summer went back to bed and I started work before we headed to the hospital for 9:45 PT. She had missed it earlier in the week due to scheduling issue, so she was anxious to go. However, she was not impressed with the exercises.

I must agree with her that some of the things they have her doing seem difficult, even if you don’t have some loss of feeling, like walking backwards a particular way or balancing on a block on one foot. I would have been stressed, too.
Then, if I recall correctly, it was chemo and then a go-no-go meeting with her “main” doctor. Her nurse came in and asked some general questions, like she how she was eating, any nausea, addressing skin irritation from radiation, etc. Part of me thought I was special that Summer was eating so well this week while I’m here! But, alas, no – it’s the new meds to help with her appetite. Still a win, though. And the nurse also told her the good news – she can get out of town for the weekend! Who-hoo! Her numbers are still looking high enough, so she’s allowed to leave. The actual doctor was in there for less than 5 minutes, looked at her very intently, and basically said, “Feeling okay? Good. Have a nice weekend.” There was a little small talk, but generally it was short and sweet.
One of the ”themes” for this week is how much Summer just wants to feel “normal” as much as possible. That’s why her trips to Carbondale are so precious and why there’s at least a little anxiety leading up to the Thursday meeting with the doctor. Sure, she wants to see her boyfriend and cat, but it’s so much more than that. Her schedule honestly reminds me of a full-time job where you run from meeting to meeting all over the building. It’s stressful. Not to be too dramatic, but it is essentially life or death everyday. Gotta make sure all the chemo and radiation appointments are spaced correctly (and double check the scheduling, because it may not be right), gotta make sure the skin irritation doesn’t get too bad and to use the right cream (don’t want any spots to get infected), gotta check the blood count numbers and make sure they aren’t too low (can’t risk getting sick), gotta drink enough water to stay hydrated, gotta get enough calories to keep energy up, gotta remember to take the medications on time (to go along correctly with the timing of chemo), gotta, gotta, gotta… The list goes on. So much coordination five days a week. So much at stake.
Carbondale is a place where she doesn’t have to be first and foremost “a cancer patient” if only for 48 hours and can act more like a “normal” 21 year old with her two Nates and Geno (the cat). I swear this is not a paid advertisement from the “Free Summer Stahl” campaign (though she has given me as many of Linda’s brownies as I want, which is a pretty sweet deal – pun intended), but being here for a few days reminded me of my own time in college and how much I relied on my friends and wanted to get my “real” life started. Summer has been so strong through all of this, and I think a lot of it is because she gets breaks that remind her of why it will all be worth it in the end. There has to be a more specific end-goal than just the huge general positive outcome of “not dying.” There has to be a clearer vision of life after cancer to stay motivated. She needs to keep seeing what she’s fighting for.
But I digress…
Radiation today was actually a high point in a way. If I understand correctly, they have moved on from “attack” mode to more of a “maintenance” mode, so it goes a lot quicker. She was excited to be done in less than half the time, so we got back to Target House on the early side (with no detours). Once again, she hung out in her room while I finished up work. Then, we did laundry and picked up burgers downstairs. After dinner, we cleaned a bit for Grammy and Grampy next week and watched “The Darjeeling Limited” (not the best Wes Anderson, but enjoyable) and “Better Off Dead” (one of my FAVORITE movies of all time). I have been very pleasantly surprised to learn we like a lot of the same movies. I’m a very proud aunt (for many reasons, of course).