We left Tremont yesterday and made it back to Memphis in a pretty good time.  If we can avoid a bathroom stop for over 10 minutes, Summer and I can nearly knock out this trip in one sitting.   It’s not fun… But it can be done! 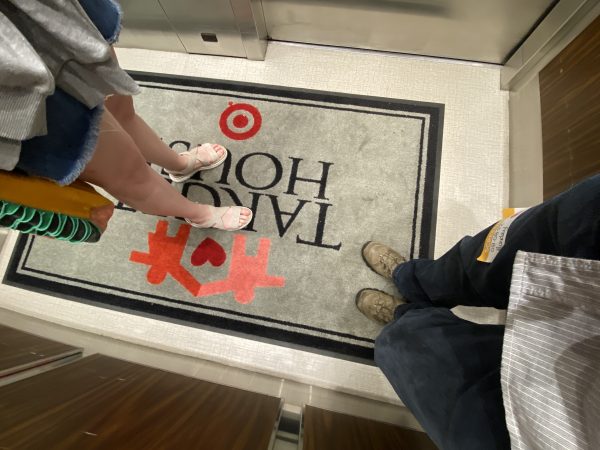 I was going to say Monday was pretty uneventful…  But I really jacked up the entry into St. Jude today.

First off…  I asked Summer right before we left if she had put on her “numbing cream” for her “port”.  She had not.  This would have been a big fumble on a Monday morning because it would mean the nurses would have to do it… And make us wait while it took effect.  Summer had me grab the plastic wrap from the kitchen and she added the topical cream to the right side of her chest.  The wrap lays over it so it doesn’t ooze through your clothing.

We got out the door!  Kind of on time.

We knew that construction was starting this month and that our normal parking lot was now closed off.  When we arrived at the hospital entry gate this morning,  there were 4 cars lined up and they were not moving.  I was assuming they were giving instructions on where to go with the construction.  After a few minutes, the log-jam started freeing up…  We went right through the gate without talking to anyone and headed into the St. Jude compound.

The whole medical center has a couple of circle drives that will take you all around the campus.  The inner circle takes us to our old parking, the outer circle takes us around the main hospital to a parking garage that I look at every day when we park in our regular parking.  I was thinking there would be signs telling us what garage was for patients…   And as we passed the first unfamiliar garage I saw no signs so I went ahead and passed it by.  Then I passed another.

Near our old parking looms the large multilevel parking garage.  I pulled inside this one optimistically thinking we will find a spot on the ground floor.  Ha!  We proceeded to drive in circles for many floors.  Our appointment was at 10 AM and as usual, I should have predicted this late arrival would mean we would get a bad spot… But I was not expecting to be on the top floor of an 8-story garage.  Worse yet,  parking outside, that much closer to the sun!    I don’t know if Angela would have or not, but it was tempting to take the steps so that Summer could keep getting exercise.  Fortunately for her, we were now a few minutes late.

We got down to the area that I would have expected to walk over to the hospital’s main entrance.   I look both ways… Its no use.  Its all barricades for as far as you can see.

It would appear that we have landed in the employee entrance area and I see lots of people walking to a set of doors on an unfamiliar side of the hospital.  We followed some guys in and acted like we knew what we were doing.  About halfway down the entrance hall, I had to say to one of the fellas ahead of us that we might need some help getting out to the patient side.  They got us where we needed to go and we exited near the normal entrance we were trying to reach.

We walked up to the COVID testing area and they looked at us like we fell down from the heavens.  “How did you get here?”  was the first thing we were asked.  We told them the summery (not what you are getting here) of events that led us to this entry.  After we walked away, the security team was getting details about our arrival…  Or failure of arrival!

By now, we are a good 2o minutes late.  We got registered and headed to Chemotherapy.  After all the walking and talking, we got out of that session nearly back on schedule.  Not bad!  We are back on track!

We had lunch with the Fry’s from Mackinaw.  Reed and his Mom joined us at the cafeteria to meet for the first time face to face.  Reed’s Mom, Courtney was one of the first people to reach out to me when Summer was first diagnosed.  She was ready with advice and told me to ask her any questions but I don’t think I ever did.  Between our awesome care team here at St. Jude and Todd and Darla… We were never driving blind into anything.  Courtney and Reed were here for a check-up and used Lifeline Pilots to get down from Peoria.  They head back tomorrow.  It’s actually great to talk to folks besides ourselves and I appreciated them reaching out while in town.

We did the thing again where we tried to force ourselves into radiation early.  Our radiation appointment was 3:15…  We got there about 1:15.  Again, I offered to go back to Target House, but Summer said it was not worth it since this was our last appointment of the day.  We waited nearly 2 hours.  We still got down early, but not too much earlier.  I busted out my laptop and bothered my employees and customers trying to play more catch-up.

When radiation was done…  We made our way out the front door of St. Jude like any other day.  I knew the parking lot was closed, but I had a plan to go around the barricaded area.  Summer was not happy that I was walking across the black asphalt area as a shortcut.  It was 100 degrees outside and it felt a little hotter than that on the dark surface.  We walked about halfway around the barricaded area before I realized this was a fools errand.  We were in for a massive walk in the sun if we continued trying to walk around the construction.  Summer was sooooo mad at me when I told her we need to turn around and go back in the hospital.  I felt really bad.

We got back inside and followed some employees through a service door to the back-of-the-house.  It was the same one we came in this morning, so I knew where we were and did not need to ask for directions.  I was admiring how nice it is for the employee side while trying to keep my head low…  When we e ran into Dr. Gajjar. He asked how Summers weekend with her boyfriend was.  (That was awesome he remembered)

We got to the garage with no more incidents…  Our car was measurably 8 stories hotter from being that much closer to the sun.   Summer was sure of it.  I was feeling generous and offered to get her a milkshake wherever she wanted.  (I had gotten an email with milkshakes ranked and told her about it earlier)  She said “Cook Out”.  (A place I had never heard of until we got here) We have a location minutes from Target house so that was easy.  She got a Banana Pudding shake and said it was pretty good.  She drank half of it.  That and some cookies were dinner.  After that, she pretty much laid around all night complaining she was tired.

She should be after today.  She walked like a champ and she really kept up with my pace.  I was impressed with her today considering the mess it was.

This whole episode feels like Jerry and the Seinfeld cast walking around a parking garage.  Can they sue me?