Sorry this one is late… Dad starts off with a great post to start off the week with Summer at St. Jude. 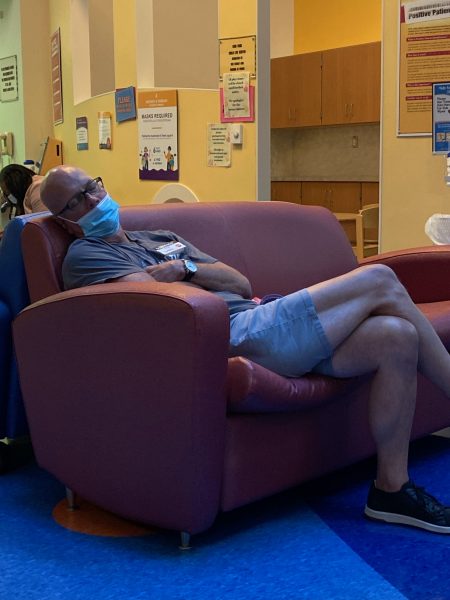 St. Jude – Monday. Julie and I left the house Sunday at 11:30, picked up Summer in Carbondale at 3:30, and got to the Target House in Memphis at 6:45. We made a trip up to the room with our stuff, then headed back out to get something for dinner. Summer seemed less than enthusiastic about going to a restaurant, so we went to a Kroger’s nearby to pick up some deli food and headed back to Target House. My first observations about this part of Memphis: the driving lanes seem extremely narrow, all turns are very tight, and the parking lots seem to have been designed to accommodate any VW bug just fine. I’m glad we only have a RAV4 to maneuver around in!We had some dinner and talked. It was great. We hadn’t seen Summer since her birthday a month ago. There is really nothing more comforting to me than a hug with her! She wanted to lay down some ground rules for the week. She said I know you are going to keep my Dad’s updates going, but please don’t share EVERYTHING. Ok. Got it. Then she said “Absolutely no photos of me. I’m not comfortable with the way my face looks now.” Ok. Got that too. Then she told us “I’m trying to stay strong and keep myself together, but it’s hard sometimes. I was an emotional wreck, but am doing ok right now. Let’s not go anywhere too dark”. That was good with us too. Then we went on just like always, as if nothing is really wrong here. She was our typical chatty Summer, and giving me grief about being her old, slow, aging Grampy. One exception though. No bald jokes…she said karma had caught up with her for making fun of my head her whole life! I felt better to get all of that out in the open, and I knew she is happy to have her Grammy and me here with her for the week.
Summer only had two appointments for Monday-chemo and radiation. Her chemo was scheduled at 8:30, and radiation at 12:30. We left Target House at 8:00 to get to chemo on time. The parking lots near the entrance were all full, so we had to park in the parking garage. It was going to be a bit of a walk from there, but Summer said she wanted to do it. She did great. She is much more steady on her feet now, and is more even in her movement. We got checked in for the day and she led us to the waiting room where she was to get her chemo treatment. She checked in and we sat down to wait for them to call her in. I started noticing how bright the room was. There were murals painted on the walls and clouds on the ceiling. One wall had a huge aquarium built into it and two little boys were looking for the fish inside it. It felt kind of fun. Then watching those boys for a bit, the realization of why they were there set in. One boy had his hair and seemed fairly energetic. The other one (probably close to two years old) had no hair or eyebrows. His skin was thin and ashy in color. He looked fragile. His grandma was with him. She pulled her phone out and played “Somewhere Over The Rainbow” and softly sang along with it to him. His face lit up and he smiled big at her. I could feel the tears coming. Best to refocus.
They called Summer in for her chemo. She told us to come with her so we could sit with her while she got her treatment. The whole process seemed to go quickly, and her first appointment was done.
Summer showed us around more of the place. We stopped at the Starbucks to get drinks, and then a snack shop for a treat. We still had quite awhile to kill before her radiation appointment. Summer told us she wanted to go ahead and check in with radiation in hopes that they could treatment earlier. It had been over an hour since her chemo was done, so the timing would be ok. They said they could take her in just a few minutes! She had her radiation and we were free to go. Now for the hike back to the parking garage. I told Summer I would get the car and pick her and Julie up at the entrance, but she said she still felt ok and wanted to walk it. The sun was bright and the air was hot and humid. I could tell that the further she walked, her pace was slowing and her energy was draining out. We headed back to Target House. Summer wanted to rest. She slept for over three hours, so she was definitely worn out! She woke up much more perky. We went out for a bit. She wanted to check out a Goodwill store nearby. Then we went to Tugs for dinner. Summer had been there with her Dad and said she liked it. The food was great! Summer only ate a small portion, then said she was done. She was ready to head back to Target House. We got comfy and the three of us watched a movie together. Nice first full day.
Summer has seven appointments today. Guess I had better get moving!

2 thoughts on “St Jude – Monday with Tim and Julie”