After a few days’ delay, I will share the weekend events!  Let’s start with  Thursday.  I  got home late and did not have a chance to talk about our last day in Memphis 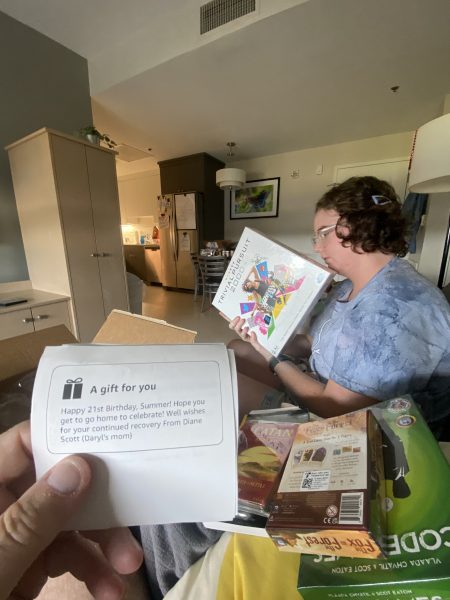 Thursday we had our first appointment with Fertility of Memphis.  Summer and I had to go to the remote location about 20 minutes west of downtown Memphis and get our instructions on shots and procedures before her egg harvest in a week or so.  I had the privilege of doing the clinic’s first shot on her stomach.  Again, we are all finding new boundaries for our existing comfort zones.   We were done with this appointment by noon, but still had a 3:30 PM appointment with Dr. Klimo and neurosurgery for a follow-up visit.  As with most of the past days, Summer wanted to nap.  We went back to Target House and let her sleep till 2.

She did say that if she felt as bad as she does now, she would rather wait till Friday to come home.  I texted my parents and told them to keep the party plans in a holding pattern just in case this headache turns into an MRI appointment or worse on Friday.  If the weekend was scrubbed…  We were ready for my folks to come to Memphis and bring Angela for a very small birthday party.

Before we went to St. Jude, we ran down to the mail room.  That morning, Uncle Steve and Lisa had called to see if Summer had gotten the present they had sent.  Oops…  We have not checked the mail in 2 days.  There were a few boxes and cards waiting for her when we got to the mail room.  Summer was grinning and laughing as she opened boxes with gifts from her Amazon gift list.  The Stahl’s had gotten her a book of National Park secrets.  She looked at me and asked where I was taking her next?  The Scotts had sent the Trivial Pursuit game she wanted… It was wanted because she is sure she can beat her roommate “Z” at it.  So heartless! (I am not going to name everyone’s names who got her presents, but these were standout moments!)

When we got back to St. Jude and met with Dr. Klimo’s team, we told them about the headaches…  They asked the same question that everyone asks: “Have you taken your meds?”  The answer has generally been “No”.  I remember when I broke my ankle years ago that I was prescribed Hydrocodone.  I hated that stuff.   It kills your stomach and leaves you wiped out.  Summer has had similar complaints with Oxycodone.

Earlier that day when I asked her if she had taken her medicine, she said “No, I’ll take it when I get up and feel better.”

My response, “You do realize this cyclical argument makes no sense, right?”

After Klimos team had left…  We asked if Dr. Gajjar was in.  They said he was out.  Katie, our care nurse,  came in and asked if she could help us.

That morning while driving back from the fertility center… Summer and I were talking about her diagnosis and she said that Dr. Gajjar makes her feel like she is going to die in 2 months.  This turned into a real conversation about what was going to happen over the next year…  And beyond.  But it also made me realize that Summer gets the short end of the stick on the cancer consultations.  Every time we have talked about diagnosis or the results of surgery… She has been in pain, or on painkilling meds.  It’s not been fair to her.  She knows very little about the treatment plan…Even though she is closest to it. 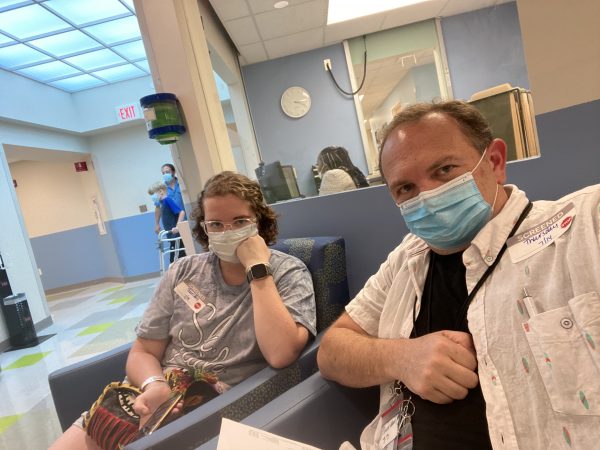 While we were talking to Katie, I thought my daughter was going to bring up the treatment plan in the conversation.  She didn’t.  She asked some questions, but I felt like she was wanting to avoid this particular subject.  I said, “I am not sure you want to wander into these waters…  But Summer has a question about her diagnosis”.  Katie looked at Summer and said “What’s up?”  Summer then explained to Katie that she doesn’t feel like Dr. Gajjar exudes confidence in her case.  She then said (And I am not making this up) “I just got salt and pepper shakers for my birthday, I want to be here long enough to use them'”.  We all had an uncomfortable giggle, talk about gallows humor!

Katie grabbed concern and handled it like a champ.  Yes, Summer does have a vicious diagnosis.  No, you not going anywhere in 2 months, she will be here a lot longer than that.  But, we have lots to be worried about for the next couple of years.  The new treatment of simultaneous Proton and Chemotherapy is relatively new.  Katie was a little surprised that Summer was getting this treatment since it’s only been done a handful of times.  Dr. Gajjar believes this is the best option for Summer’s diagnosis.

After she gets done with all the treatments and Chemotherapy…  She will still require MRI scans every 3 months for the foreseeable future.

I asked Katie if the cancers can come back that fast hoping she would tell me no to give us more light for the tunnel.  She said, yes, they can return in months.  Ugh.

Summer then asked if we had results from the LP (Spinal tap).  I tried to be a good Dad and shut that down as no matter what the LP results were, the treatment has been set.  Katie said she could look it up.

The results were clear.  No cancer cells were found in the fluid.  Yay!

This whole conversation may all sound like a horrible way to end the day… But I think it was a weight off of Summers back.

I asked Summer if we were going to be able to drive home tonight… She said, “Let’s go”.

We ran back to Target House, packed, and left at 4:30.  We got to our house in Tremont about 10:45 that night, and it would have been sooner if we hadn’t spent 20 minutes at that gas station in Missouri!  That’s another story.

We got home, ready to party!