Tough news today…  Or is it?  I can never tell. 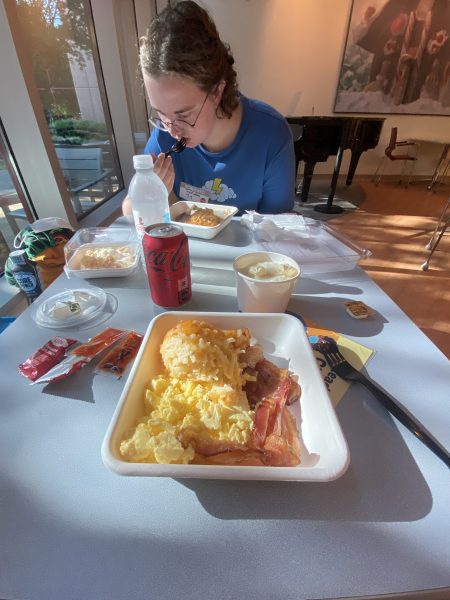 We had several appointments today.  We ended up missing one because others went long.  Today, like yesterday was kind of a drag on Summer.  She was tired and worn out by the time the day was over.  She perked up for a reward though… So it’s all good.

We did eat some serious breakfast in the cafeteria this morning to try and solve our energy issues yesterday.  Hashbrown casserole and Grits?  Carb city baby!  I did not finish my plate, but I enjoyed what I did throw down.  Summer has the luxury of eating whatever she wants because she will have a hard time with food and appetite in a few weeks.  So, eat up!

The big news…  Dr. Gajjar, Katie, and Lindsey came in and talked to Summer about a new course of treatment.  Dr. Gajjar says that Summer’s Medulablastoma with the MYC amplifier has shown better success with a chemotherapy regimen along with Proton treatment.  So, she will be getting daily drips of Chemo on top of her radiation daily for 6 weeks.   We had to sign more paperwork for the procedural change.  It was optional… But is there really an option when your doctor is suggesting this is a better treatment?

This change also means that Summer needs to do the egg harvesting process now.  There will be no chance for this procedure during the planned break we were hoping for after the 6 weeks of radiation.  It’s really not a big deal in my mind for timing, but we have been told it can make Summer nauseous and sick during the injections to enhance fertility.  Of course, she really only cares about her birthday on the 16th… And this is an inconvenience.  So, we have been working this out.

Personally, I think you do it.  You may never need them.  But if you don’t, you may look back and regret it.  I do believe we are all on the same page.  Case closed?

We met with Radiation Oncology and were introduced to the head of Summer’s Proton treatments.  Dr. Tinkle and his assistant Druscilla (Amazing Buffy name, yes I did ask if she was named after the character, No she’s not) came in and read through every side effect and known issue for radiation treatment.  Cataracts, hearing loss, hair growth issues, bone fragility etc etc.  In the end, they ask if you still want to proceed.  Kinda like Gajjar’s conversation earlier, what else are we going to do?  Walk away?   We are in for a penny or a pound.  Summer signed the sheet and we are scheduled for a body scan in the morning.  This will measure her skull and spinal cord and then they will set a program to run the protons exactly the same way over her body 30 times.

Dr. Klimo came by today and removed Summer’s staples…  Took off her bandages that has been barely hanging onto her head since last Friday and said she is free to wash her hair.  This was thrilling news!  Although, we were given the option of cutting her hair off now because it is estimated in week 3 of radiation that it will start coming out pretty vigorously.

She’s having a birthday, so we are keeping a few more weeks.

Klimo did show us the MRI post-surgery that was done yesterday.  It looks great.

One note from Gajjar and Klimo today was the biopsy on the tumor material removed.  I am a layman at this, so forgive my ignorance.  The tumor material sent from CARLE was Type 3 with MYC Amplification.  This is the worst of the worst.  This is what Summer’s treatment is based on.  But, the news from both docs today was that there was not MYC Amplification in the material Klimo pulled to be tested.  What does that mean?  Well, it means there is a slow-growing tumor and a quickly growing segment joined together.  One may have been growing for a while and the rapid growth may have grown off of this.  Regardless, they both said “You treat “up””  meaning that you treat for the most severe cancer. 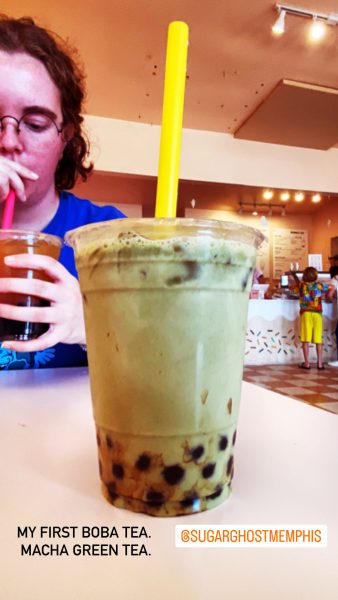 This was all crazy and confusing.  It’s been tested with genetics, so we know there is no chance of a mistaken diagnosis.  We will just keep taking these news reports as they come and deal with it.

Today, we dealt with it by going out for Boba Tea.

I have never had it.  Summer was gassed as I said earlier, but we both didnt want to go straight back to the Target House at 4 PM.  She said Boba… I said, “where too?”

Sugar Ghost is a little ice cream and tea shop in our area of Memphis.  16 dollars later, I had 2 teas and a sticker.  It was good.  Kinda weird…  But good.  I got green tea matcha because my Toyota rep Andrea clued me into this drink.  Otherwise…  I was throwing darts at the menu.

Dinner was supplied tonight by a restaurant owned by Moe’s Burritos.  Chicken wings and sweet potatoes with apple pie.  It was pretty good.  It kept us from leaving the apartment for the rest of the night.  I did laundry (for about the 5th time since I have been married) and we watched Stranger Things on Netflix for a few hours.

Tomorrow, we have appointments till 12:30. Then, I am taking Summer to Carbondale to finish that whole packing thing.  I will probably head home for 2 nights and pick her up on Sunday so we can start another week on Monday.

Oh, I forgot… After having her staples removed today, Summer can actually turn her head.  It was weird to have her turn and look at me while talking to me while on the couch tonight. She is excited about sleeping tonight as well…  She said she has not been able to lay on her back since the surgery last week because of the pain of the staples.

Have a great weekend!