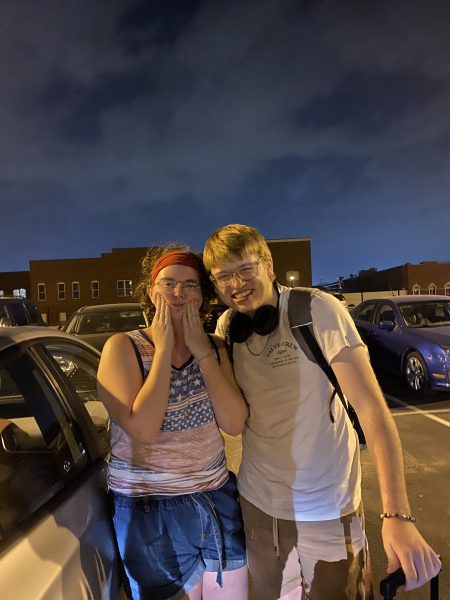 I don’t even know how to title these posts anymore…  It started bouncing back and forth with different hospitals, now we are back at St. Jude.  Its getting confusing.  Anyone with a better idea… I’ll take it.  I ran into a young lady on the elevator the other night and we asked how long she had been at Target House… She said this was day 58.  Can I possibly keep track of days like that since Memorial Day weekend?  Might be a thought.

Last night we dropped Nate off at the AMTRAC station in downtown Memphis.  It absolutely sounded like a battle zone with 4th of July fireworks and gunfire off in the distance.  Crazy!  Afterward, I took the long way back to Target House and we ended up crossing Beale Street.  Holy smokes.  That looked crazy as well.  I did make a wrong turn.  Summer can tell that story sometime.  My blog, my prerogative to withhold my mistakes.

Nate came down on Thursday morning via the train from Carbondale, but he arrived just as Summer was getting cleared to go into surgery at LeBonheur.  They probably would not have noticed if I took him back to her presurgery room… But she was super close to rolling into surgery and I wanted to be there.  (Sorry Nate!)

I had said to Summer, “Can he change his days?  You are going to be stuck in the hospital and it’s not worth his time.”

Well, I will gladly eat those words.  Not only was she up and doing things before Nate left.  I would suggest that his presence helped get her through some of this trauma.  He’s a good, level-headed guy who I can tell really cares about Summer.  He did confer with me on a car ride that he was a little upset about Summer’s new group chat with other St. Jude kids.  One of the girls told everyone a horrible story about getting rejected by her boyfriend because she had cancer.  Worse yet, the guy did it via text.  Summer, of course, layed that story on Nate.  I don’t think he is planning on breaking up… And if he does… He best not do it by text!

Seriously though.  Nate’s time here in Memphis was a godsend and I am glad he came when he did. 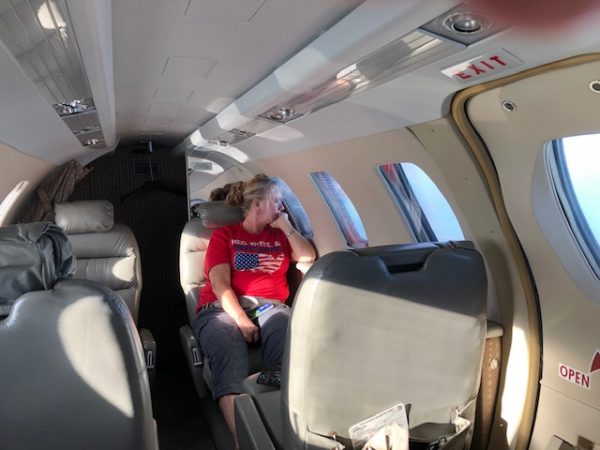 This morning Angela took off for Peoria.  We have been trying to figure out the 1 car scenario if one of us leaves.  It’s not pleasant.  Todd and Darla clued us onto Lifelinepilots.org.  They are volunteer pilots who will fly you if you have a medical or financial need.  Bob the pilot called a couple of days ago and said he was heading to Peoria on Tuesday and Angela could catch a flight north.  This morning at 6:30, we drove to the Wilson Air Center at the Memphis airport where Ang was treated to a chauffeured ride on a small jet.  Pretty cool.  She landed in Peoria in 90 minutes.  Aiden picked her up.

The plan is for Angela to stay 2 weeks in Illinois while I run Summer around to her appointments.  2 appointments today, and 4 tomorrow.  I didnt check Thursday yet.  Summer is excited, it looks like 1 on Friday, so she hopes I can take her back to Carbondale to get the stuff I forgot out of her college apartment.  I thought I did a good job cleaning the place out on my last visit.  But, you know…  I’m a Dad.  I was bound to screw some of it up!

Today, we met with Katie, Andrea, and Dr. Gajjar…  All of them marveled at the fact that Summer was up and going so quickly.  Then again, Gajjar has alluded a few times that this surgery, if done at St. Jude the first time would have been quicker to recover from.  I understand that fact and love knowing how awesome they are… But I have to package it in my head that CARLE possibly saved her life.  I don’t think she would have ever made it to Memphis.  Maybe Barnes… But that was not in the cards at the time

Summer gets another MRI tomorrow.  I’ve lost count on how many she has had to this point.  I am not even sure what they are looking for in the scan this time.  Summer is concerned that they will make her lay on her staples for an hour.  So, it will be an adventure.

When we were talking earlier, Dr. Gajjar also talked about egg harvesting again.  He wants to do it now… versus waiting till after radiation.  We have not talked much about it since the specialist told us we have a few months to decide.  We will get more info on this tomorrow on Thursday.

Thursday, Summer is scheduled to see Dr. Klima again for a final follow-up.  Hopefully, the tape and staples come out of the back of her head after he sees her.

As we have seen over the past few days… The steps add up to something big when take a minute to look back.

Summer and my first-night solo together was a dinner provided by One and Only BBQ and 2 episodes of Stranger Things.  All the while… Angela was calling to freak out about Aiden’s firework display.  Thanks to Gabe, George, and Andrea for coming over and taking her off the ledge.  I was sure Aiden was going to die tonight  (by a firework or his Mothers hand)