Summer is in the “Goldilocks” zone right now.  That’s what I believe.  We are not even a week into the treatments and things are going great.  The doses of radiation are a full blast but the chemotherapy is milder for this session. 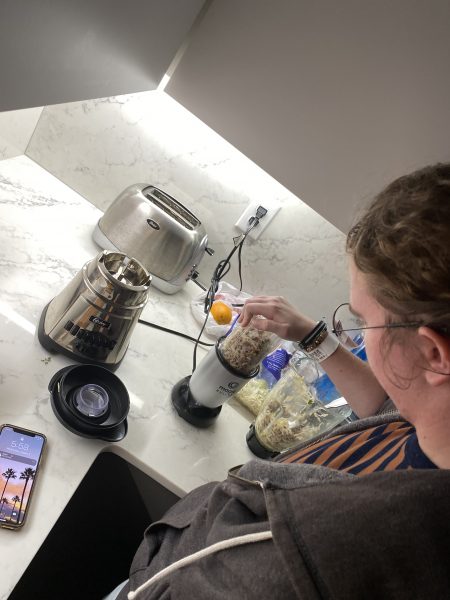 So far there have been no ill effects from either of those processes and her general health from all the surgeries seems to put her in a recovery state that keeps getting higher and higher.  That said…  We are in the Goldilocks Time.  Goldilocks Zone is a term for perfect conditions to sustain life on another planet.  Nasa uses it… So, since I always planned on Summer working at NASA or JPL..  I will use it.  (She did go to space camp for goodness sakes!)

Today we met with the occupational therapist who measured Summer’s hand coordination skills.  For those who do not know, during the surgery at CARLE, Summer lost feeling in her right hand.  Specifically the thumb and outer half of her index finger.  She can put those fingers together and use them… But she cannot feel them.  Summer revealed to me before the meeting that she actually had nightmares about this session.  The good news from today is that she did great on her tests.  Her times for moving and picking up items with her hands were much better than the first time she was measured at St. Jude.  The therapist is a super nice young lady and after we were done we revealed the apprehension beforehand, she was shocked when she heard that this visit was stressful for Summer.

The session wasn’t all sunshine and roses.  Summer has lost some muscle tension in her hands.  Her grip strength and finger pressures have declined about 10 to 15%.  I would chalk this up to a lack of activity while recovering from surgeries.  I also noticed that instead of using her right-hand index finger and thumb as tools to work together…  She is now using her index finger and middle finger to grab small items.  Compensation for lack of touch sensation.

After our first two sessions this morning, we had a two-hour break.  I was happy to sit down and break out my computer but Summer said a ride to Target House for a nap would be better.  We came home and I got in some work time while she slept.  Afterward, we went back to St. Jude for her Young Adult group.  While she was there I got my salad and sushi.  I have been diligent to eat better this time around.  No sweet teas, no cereals etc. So far so good.

We then went down to the series of waiting rooms that is Radiation.  We showed up early and they got us in early!

While in radiation, I worked on a Toyota thing… I had to have Pat Fort set up my work computer in Pekin for what I would have thought was a simple project.  For the most part everything I do at work is web-based.  I have been able to do most of my functions on my personal laptop as long as I have internet.  Today, I was working on something and I could not get through to the Toyota site.  There are some functions or websites that like to be used when they know you are dialing in from a dealership and this must be one of the few left.  Once Pat got that handled, I was knocking out this task.  Yeah, it took twice as long (at least), but I got it done.  I now know for the next one what’s going to happen, so that’s something.

After radiation…  We headed back to Target House again.  Along the way, I wanted to stop at the Asian Market near our place.  Summer was making pork dumplings BY HAND tonight and I was going to find some ginger or something on the side.  The Viet Hoa Market is the bomb!  OMG!  If I lived here I would shop there once a month as it has everything and anything you need.  10 times bigger than the best market in Peoria.  Jume, you would love this place!  As it turned out, their ginger was wrapped in a package with 4 other ginger roots.  I would not eat that much ginger in 15 years at the rate we are cooking here.  I was going to wander more, but I could tell I was losing Summer’s patience.  (They had sooooo many woks and cement stoves for cooking outside!!! I could browse for days!)

We came home and I called to follow up with the Peru social security office.  I asked for Julie… Sure they would say no one worked there with that name.  I was shocked that I actually got her!  After talking for a bit, we found out that Summer has too much money in the bank.  Her CEFCU stands at 3600 bucks.  If you have more than 2000 dollars you do not qualify for federal benefits.  That’s laughable, as 3600 bucks is 3 months’ rent in a town like Memphis.  Regardless, she needs to pay off some more bills with her checking account so we can lower that number.  Julie said her ap was ready and was heading to Springfield.  We should hear something soon.

After the phone call, we started the dumplings.  I thought I would sit on the couch and get dinner made for me.  Not quite.  Things got ugly.  2 hours, 2 attempts at different blenders, and 4 dirty pans later…  We had 30 dumplings and rice.  I think she ate 4.  LOL.  I ate twice that.  Between this dinner and last night’s giant tray of gullash from Stouffers… We have food for days!!!

Between dumplings, we talked to Angela on the phone for a bit.  We are trying to figure out the plans for Nate’s birthday party this weekend in Decatur so thats going to be a logistics issue for this weekend.

Also, I was able to get my sister Sylvia to help out with an upcoming week this month.  This is a huge relief.  Angela needs some serious catchup on hours and we are trying to navigate Aiden’s college move-in at the end of this month as well.  Summer will have her wish, between Sylvia and my folks, she will have some new faces to help get her around Memphis and St. Jude this month.  Mom and Dad will be gone for a couple of weeks!  Whos going to go crazier?

Back to the “Goldilocks”.

At some point during the next few weeks or months Summer will start suffering the ill effects of the chemicals being put into her body to kill cancer.  But right now, we are making it look easy.  Cooking dinner, laughing (a lot!), and looking at Indian mounds after radiation all make it look like we have this thing licked.  We are far from that.  I know it and if I seem a bit self-indulgent dragging her around and doing things… Well, it’s because these days will not last.  Better days with renewed energy might be a year away.

I asked Summer tonight while we eating dinner if she had noticed any hair falling out.  I knew the answer to this one since I am the only one who empties the drain screen in the bathtub.  She said not any more than normal.  I have not seen a long hair at all in the drain… But again…  It’s coming.

Brutal Schedule of 7 different stops tomorrow:  Chemo, Physical Therapy, Labs, Speech Therapy, Nutrition Followup, Neurooncology Visit, Radiation.  I am sure a nap will be in order at 4:30.

An old 80’s favorite artist of mine, Rob Jungklas, played a show tonight about 5 minutes from Target House. I knew this show was coming and put it in my calendar in case I could make it.  That tells you the dedication I have for my kid. I only thought about leaving her alone for about 5 minutes. Then I floated bringing her along. She looked at me like I was crazy.  Then my parenting controls kicked in. Maybe next time Rob.

I also put up my Decemberists tickets for mid-August up for sale on Stubhub.  The show is on the 16th,  Even if I was home… I would feel bad taking off half a day of work and driving to Chicago midweek.