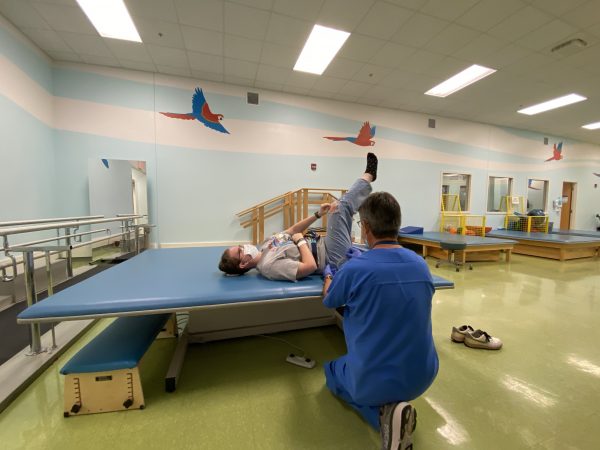 Summer’s first appointment was Speech Therapy at 8:30. Julie and I were up early and finished packing, and I loaded our stuff into the car before Summer got up. We were all ready to head home after her last appointment for the week. Luck was with us and we got a parking spot close the entrance again. (I guess sometimes it’s the little things???). The therapist took Summer in right away. It’s amazing how they have helped her learn to speak so clearly when she only has the left side of her face and mouth to use. I told her if she would speak a little louder though, people could hear more easily. She told me that all girls can hear her just fine. It’s only guys who can’t hear her. She told me Nate and her Dad tell her they can’t hear her too. Guys don’t listen. “Besides Gramps, you are old and deaf so that’s on you!” That’s probably fair…
Next appointment was Radiation Therapy clinical visit. Summer said it’s once per week and never amounts to much. They basically see if she’s having serious side affects from the radiation treatments. She said this time she ran into her doctor from the session where she killed the Easy Bake Oven earlier in the week. The doctor told her “Good news Summer! We got a new toaster oven! You can make Shrinky Dinks now when you come back for your next session!” We all had a great laugh with that news!!!

Then on to the Medicine Room. We were a few minutes late, but Summer still had to wait awhile to get in for her treatment. This time there were two little boys with feeding tubes. The tubes wound around them to their back packs. Another really little guy with a port sticking out. It makes me so sad to see any of this. We could hear another toddler screaming and pleading “No…no…no…” He wasn’t even hooked up yet. I hate to say it, but I feel relief when Summer comes out from this treatment so we can move on.
It was time for lunch. Summer saw that they had pizza in the cafeteria, and thought it looked good. She wasn’t able to eat a lot of it, but she seemed to actually kind of enjoy what she could eat. We chatted for awhile. Her mood and demeanor were much more upbeat. She was on fire at this point with her “Old Grampy” jabs, so we knew she was feeling ok. I told that I guess even after having two brain surgeries, the doctors hadn’t disturbed any part where her making fun of me comes from. (Thinking back, maybe not appropriate?). She laughed and said “Oh no Gramps! That’s all still there!”
Last appointment of the day was Radiation. Summer actually got in ahead of her scheduled time. They did tell her that her last radiation treatment will be on Thursday of next week, and not Wednesday as she had been told. She said you would think the communication level would be a little higher between doctors when you discussing chemo and radiation…they are both kind of a big thing. We had to agree with her.
We were able to get on the road about 1:00. After losing an hour in southern Missouri because of a bad accident, we dropped Summer off in Carbondale about 4:30. She was almost giddy getting out of the car! She gets to adult for a few days and remember the life she had before May 30th. I hope she enjoys every minute.
Angela will pick her up on Monday and they will head back to Memphis for Summer’s final treatments on this phase. Summer will then have five weeks off for her body to rest before the months of chemo treatments begin. She will be in and out of the hospital multiple times. I don’t know how the blog will work going forward, but I will try to continue updating in some form. I feel with everything in me that Summer has done so well up to this point because of all the prayers and well wishes she has received from everyone reading this. I know God is hearing you. Summer knows too. She told Julie and me that she does read the posts, messages, texts, and cards as she can. She does not respond to any of them. She doesn’t want anyone to be upset with her, or think she doesn’t appreciate them. She simply cannot do it. She gets overwhelmed by it all, and then she gets emotional. She’s trying very hard to stay positive and she’s still trying to figure out how to keep it going. We told her not to worry, but to keep herself positive in whatever way works! Please, please keep her close.
I learned a lot this week. Some of it was really hard, and some of it was awesome. Even though Summer looks somewhat different now, she is still beautiful. She’s still got her sense of humor and her wit. She’s still got her wonderful laugh. She’s still got her spunk. I know she’s our granddaughter and I might be a little prejudiced, but she is an amazing person. I know more that ever how precious family and friends are. We have to keep them close, because they are the ones who will hold you up when you are not sure you can do it by yourself.