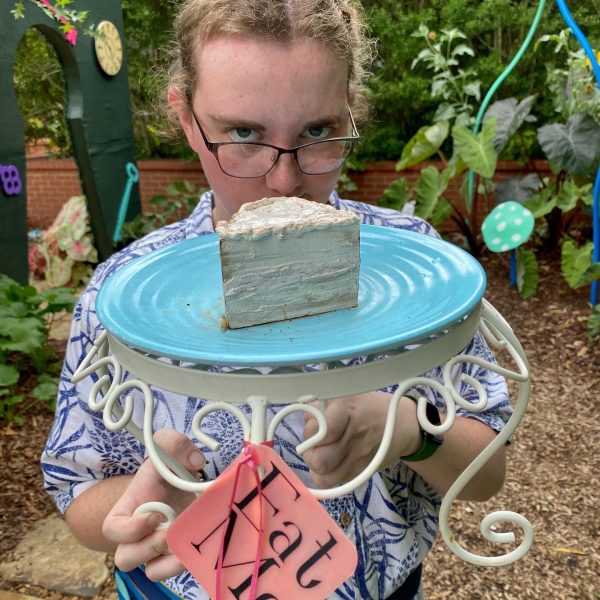 I am back at St. Jude… So be prepared for lots of updates and a little too much information as usual!  Sorry Summer.  While I was gone over the past two weeks, Summer had her fertility treatment completed and had her first dose of Proton Radiation and Chemotherapy treatment.  Lots to break down.

Fertility started while I was here 3 weeks ago.  We were in the middle of it when we came home for Summer’s birthday.  Honestly, she did terrific going home and it was perfect timing.  She was worn out and struggling to get through that Saturday of her birthday, which she did in a very determined way.  But, reality started creeping in Sunday during her drive back to Memphis with Angela.  She had a rough drive and was vomiting from the fertility drugs.  They had finally caught up.

Over the next week, Angela would give more shots to Summer.  Twice as many as I had to.  2 shots a day were prescribed as we got closer to the egg retrieval day.  Ultimately, Summer would produce 24 viable eggs that have been harvested and shipped to Texas for future use if needed.   St. Jude pays for all of this.  Even the storage of the eggs till she is 35 years old.

That got us to last week.  Summer started going through her radiation routine in the middle of last week.  The first day on Wednesday was a test run of the mapping that had been done previously.  They had her lay down in the radiation area and let the machine run the plotted pattern.  Once that was over, she was hit with a live dose on Thursday and Friday.  Additionally, Friday she received her first dose of chemotherapy.

That had been a big week already…  But then we heaped some guests on top of it to come down and visit.

Nate came down to stay for a few days.  That is always great.  I am happy to see them chill out and watch TV on the couch like it’s a typical rainy day during a normal day in their apartment.  Not 300 miles from Carbondale in Memphis because of cancer.  They worked together tonight to make dinner in the apartment.  We get food if we go to the St. Jude cafeteria, but I am happy to let them stay in and work on some pasta together.

Friday, I came down with our friends Mark and Tammy.  They said they could come down for the weekend and give me a ride down in the process.  I left with them from Tremont around 1  on Friday afternoon.  We pulled into Memphis around 8 PM and met up with Angela and the kids at the hotel Tammy had reserved.  The plan was to play some games and hang out with everyone all weekend.  The hard part was finding a place accommodating to guests. 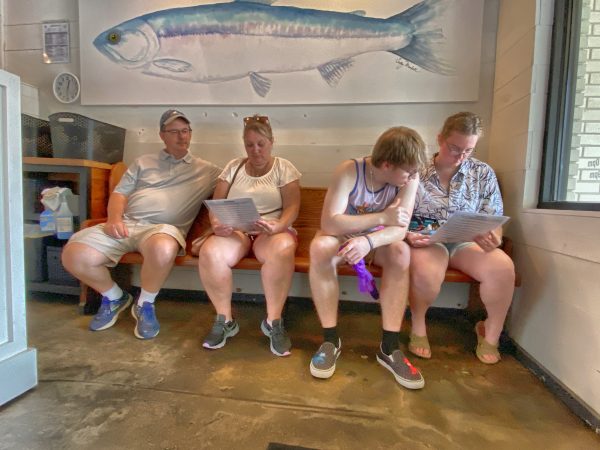 St. Jude and Target House are off limits to casual guests.  We have this amazing facility at Target House that is set up for dozens of people in any number of rooms for parties, working out, dining, and crafts.  But since COVID, they have locked it all down.  Even the families inside the housing cannot intermingle.  Now, I have no problem with this, as it’s probably the safe thing for kids with compromised immune systems… But it really leaves us in a lurch if someone wants to come down for the weekend.  We want to be social, but our space is an isolation chamber.

On the first night, we went to the hotel and hung out in the lobby till midnight having a good time while people passed by.  Some of them even gave Tammy a hug.

Saturday, we ran over to the botanical garden for the Alice in Wonderland exhibition.  They had made a fun series of topiaries based on the classic Alice in Wonderland theme.  Lots of cards, Cheshire cats, and tea party themes around the park to enjoy.  Summer did a great job, but she was in pain from a series of things going on.

First and foremost…  24 eggs being harvested means she ovulated 24 times (or more) in the span of a week.  This put her in serious cramping pain.  In order to deal with that, she was taking some painkillers.  Pain killers, as we have seen before, resulting in a lack of bowel activities.   We have joked about the BM in the past, but the pain she is experiencing now is a combination of both of these issues.  She has not been able to sleep well at night and at the restaurant Saturday night, she spent more time in the bathroom than at the table.  I rushed to get the car and picked her up at the front door to make an escape.  I took her and Nate back to Target House and we made the call to end the night early. 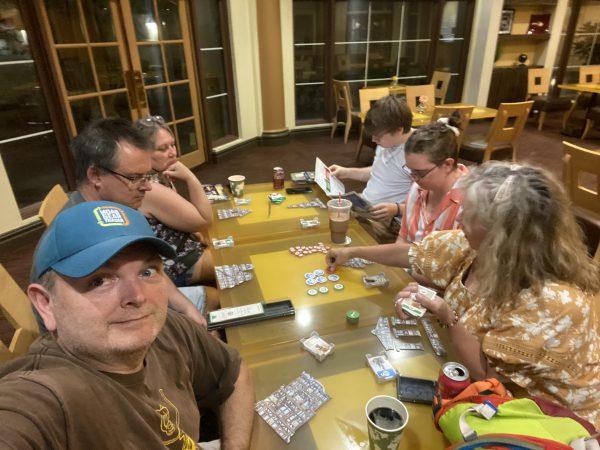 Summer had been sick in the restaurant and I knew Mark and Tammy would understand if we stayed with her in case she continued to get sick.  Their hotel was 15 minutes away and I did not want to be that far if she needed us.

This morning, we had some Memphis breakfast downtown at the Arcade Diner.  It gets high marks from tourists… But I think it’s just a place people with a hangover from Beale Street go to get some bacon and eggs.  It was pretty good, but not amazing.  I got grits and tried a sweet potato pancake.  Angela had what they call a french toast.  It’s more of a fried baguet with powdered sugar on it.  We then headed over to the Pyramid to go to the observation tower.

Whats an observation deck looks like in the rain?  It looks really wet!  We get a free ride to the top with Summer, but I can’t imagine what others thought as they paid admission to the deck that looks over downtown.  We walked outside and got blasted by rain.  My shoes are still drying out.

After Angela left with Mark and Tammy, I went back to Target house with the kids.  Summer has been talking about getting some ice cream at some fancy place nearby… I thought we would go there tonight.  But, she had more pains in her stomach and wanted to stay in.  She and Nate spent a good chunk of tonight watching anime on his MacBook after we played a few games.

It’s a solid want to spend a Sunday night.

Monday we have 4 appointments.  Physical Therapy, Pharmacy consult, Radiation, and Chemotherapy.  This will be my first time dealing with the last two on that list.  I will fill you in on the details as I figure out what is going on. 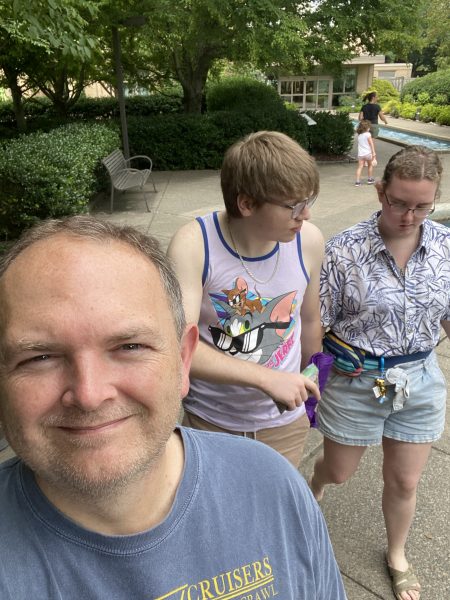 I had wanted to mention this in a post last week.  Everyone is awesome and I get messages all the time saying things like… “I want to get Summer ____”.  I get it… I want to get her the world.  I am trying to brainstorm as well.  Sorry if I didn’t give anyone a good answer.   She was bombarded with gifts on her birthday and I don’t think she is wanting for anything.  This little apartment is packed to prove the point.

I called her last week and asked what she was doing.  My kid had a muffled tone and sounded distant so I had to wonder if I woke her from a nap.  She admitted that she was hiding in her room.  Still feeling bad about fertility and frustrated from sucking (her perspective) at some painting and drawing she had done with her new supplies had her reserved to laying in bed with nothing to do.

I think, in lieu of any gifts, what she really wants is some visitors besides Mom and Dad.  Her last radiation during this current session will be on September 7th.  We will then have time for some visitors as she will be home for 5 weeks.  I am really hoping she can see some friends and have some laughs and conversations to raise her mood.

Then, I am hoping we can also start getting a few more people lined up to visit down in Memphis throughout the winter when she has to come back in Mid October.

I just started the last 5 paragraphs with “I”.  Yeesh!