Monday morning appointments laid out the schedule for the next few days.  Summer will have a few procedures under anesthesia on Tuesday.  She will have a light morning Wednesday and we have some appointments later that afternoon.  Thursday we meet with the fertility doctors and there was a note that I have to learn how to do the injections.  (Oh the things you learn doing this).  Friday?!?!?  Up in the air right now.   Of course, Saturday is her 21st birthday, so we have to get her home for that! 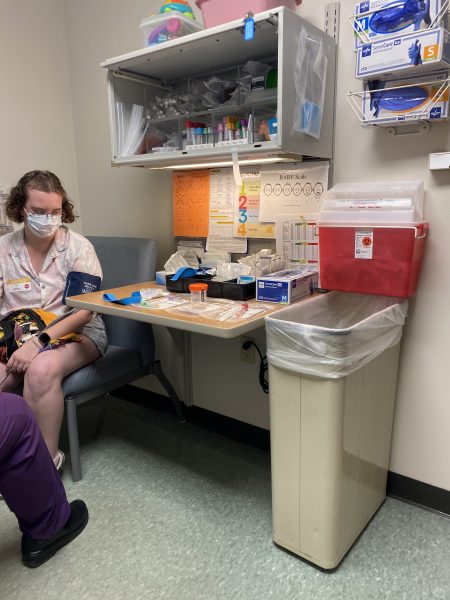 We came in today and Summer was sure that she would be getting an injection port “installed” today.  I said that was impossible because they said she would be sedated for that procedure.  On top of the normal weekly stuff, she had 2 appointments that convinced her it was “going down” today.

First was labs.  You know, big needle and draw some blood.  Then pee in a cup.  The blood part actually went well.  The nurse did some numbing thing on Summer’s left inner elbow and before I knew what had happened…  She had the two vials of blood completely filled.  That never happens.  Good start!  Then, came the hard part?!?!  Peeing.  Sorry Summer.  I share too much.  She came back from the bathroom and said she had nothing to share.  Must be a girl thing.  Guys can always squeeze a little out.  Summer was allowed to take the cup with her if she promised to return a sample later.

After labs, Summer met specialists that she was worried about.  As I thought, they only wanted to see her to prep for tomorrow’s surgery.  The normal questions about health and some instructions about rubbing some iodine on her chest tonight during her shower.  (We were just arguing about that while I write this).   (Bonus, she just showed me the ruined washrag that the iodine turned green!)

Child Life came by with a golden labrador.  I was ready to go, but Summer said we are staying to see this dog.  It was actually great. Child Life representatives come in with the totally “chill” dog and have a conversation about your upcoming surgery.  It works.  I need that for the waiting room at Fort’s.  “Mr. Smith, I want to introduce to you Luna our furry mascot of the store while I tell you your wheel bearing is falling apart”.  Could it work everywhere you are dreading bad news?

We came back for “Book Mobile” at 3 PM.  Got the mail and returned our Beatles movie.  Letters and care packs were very welcome.  THANK YOU!

Fertility finally called her at 4:30 this afternoon to tell us that her Thursday appointment will be off-site from St. Jude at Dr. Baily’s office.

Summer is a trooper.  I cannot sleep the night before a dentist appointment and I really get nervous around any surgery that puts me to sleep.   Her…  She’s a champ.  I cannot even count the number of times she has been put to sleep for procedures in the last 6 weeks and nary a complaint.  I know she doesn’t enjoy it, but it’s what has to be done.

A couple of times today we were in St. Jude walking down the corridors to appointments.  Every once in and while you can hear young kids screaming their lungs out from behind a door.  A kid getting a needle that makes no sense whatsoever when you are too young to understand.  Summer and I had a brief conversation about if it’s better to do this when you are young or older.  I don’t think we got to a conclusion before she had to use her pee cup.  Regardless, you cant walk around here without thinking of these things. 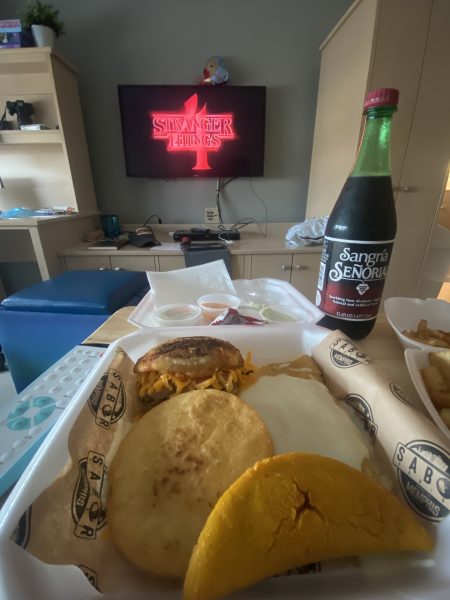 Knowing that her surgery was tomorrow and she can’t eat breakfast…  We made a plan to get an extravagant meal for the two of us.  Something a little adventurous.  Amy Steidinger (Who is celebrating her birthday today BTW) had sent me an Uber Eats card when we were at CARLE on our first day of this turn of events.  I was going to use it in Champaign, but Summer told me in no uncertain terms that I was not allowed to eat anything decent in front of her while she was limited on dietary.  So, I held the card in my account for a special occasion.  Tonight was it.

We found a Venezuelan restaurant on Uber East that had takeout.  Sabor Caribe is just a few miles away and they had a good-looking menu with REAL pictures.  Summer has been talking about Eminadas forever.  Seems we never have a chance to order them.  This little restaurant had them and a bevy of other South American items.  We blew 50 bucks on way too much food for both of us (leftovers in the fridge).  I believe she has enough calories to make it till tomorrow night… Or Wednesday.

Appointments start at 8 tomorrow.  Surgery at 10:30.  I will keep everyone posted on Facebook.

Oh, I am fidgeting with the Gofundme.  So, if you see posts… It’s because it’s a mess.  Everything I wrote before seems to be out the window and we are so far off the path of where we thought we would be a month ago that the “ask” is a bit naive.

We did take a big chunk of those funds and paid off Summer’s student loan with the Airforce.  I think I have explained that AirForce bill a few times.  Of course, we had hotel room expenses, gas, food, and other costs that were immediate while at CARLE.  But, this past weekend when I rushed home for 48 hours of “home-time”, Ang and I had a chance to talk…  It’s a serious reality that Angela missing more work doing rotations here in Memphis is going to hit hard.  Especially as this drags on for the rest of the year.  Angela said, “I may need to use some of that GoFundMe money for bills”.

In my mind… I think that’s fair use.  While I have dreams of Summer walking out of St. Jude and getting a  new car and enrolling for her last semester of college at SIU…  It’s going to be a hard slog to get to that point.  We will cross those bridges as we get there and do everything possible to help her along the way.  Whether that’s a new(er) car, lease payments, or whatever she needs to get rolling again at school.

Oh, and we got that bill from CARLE for $348,000.00.  That puts a scare in you.  Angela got a notice from some company that they sublet the neuro-monitoring during the surgery in Champaign today.  One of those letters that say “Hey, we worked on Summer and we are sending the bill to Health Alliance.  Just letting you know they better pay us”.  I paraphrase.  And my favorite, we still don’t know about that helicopter ride to Champaign from Carbondale.  These are the ones we know about, who knows what bills are lurking out there!?!?!?