Tomorrow is another big day.  This is the second brain surgery and it is to remove more tumor mass. It’s being done a few blocks from St Jude at Le Bonheur Children’s Hospital.  The surgery time is set for 6AM… But we will be there about 5 or so.

The presurgery meetings have been good and the doctor is confident that he can get in there and take care of business.  100 percent removal is what he is shooting for.  Gajjar said that they have the ability to do an in-surgery MRI before they button everything up.  That means they don’t have to come back later.

The surgery room is booked for 5 hours.  This should be a shorter wait than the CARLE surgery which was 10 hours of waiting!

Today we had several meetings and we were hopping from room to room in the main St Jude complex.

Since our first meeting was at 9.  I attempted to make a real breakfast in our new room.  Angela said to make an omelet with lunch meat.  She then jumped in the shower.  huh?  I am not doing that!  The Target House had a pile of sandwiches delivered from Chick-fil-A last night.  We still had one in the fridge.  (because leftovers) I chopped up the breaded breast and added some pepper flakes, salt, and fresh peppers.  It was not amazing, but it was adequate.  I will be getting more groceries after Summer gets back home from surgery. 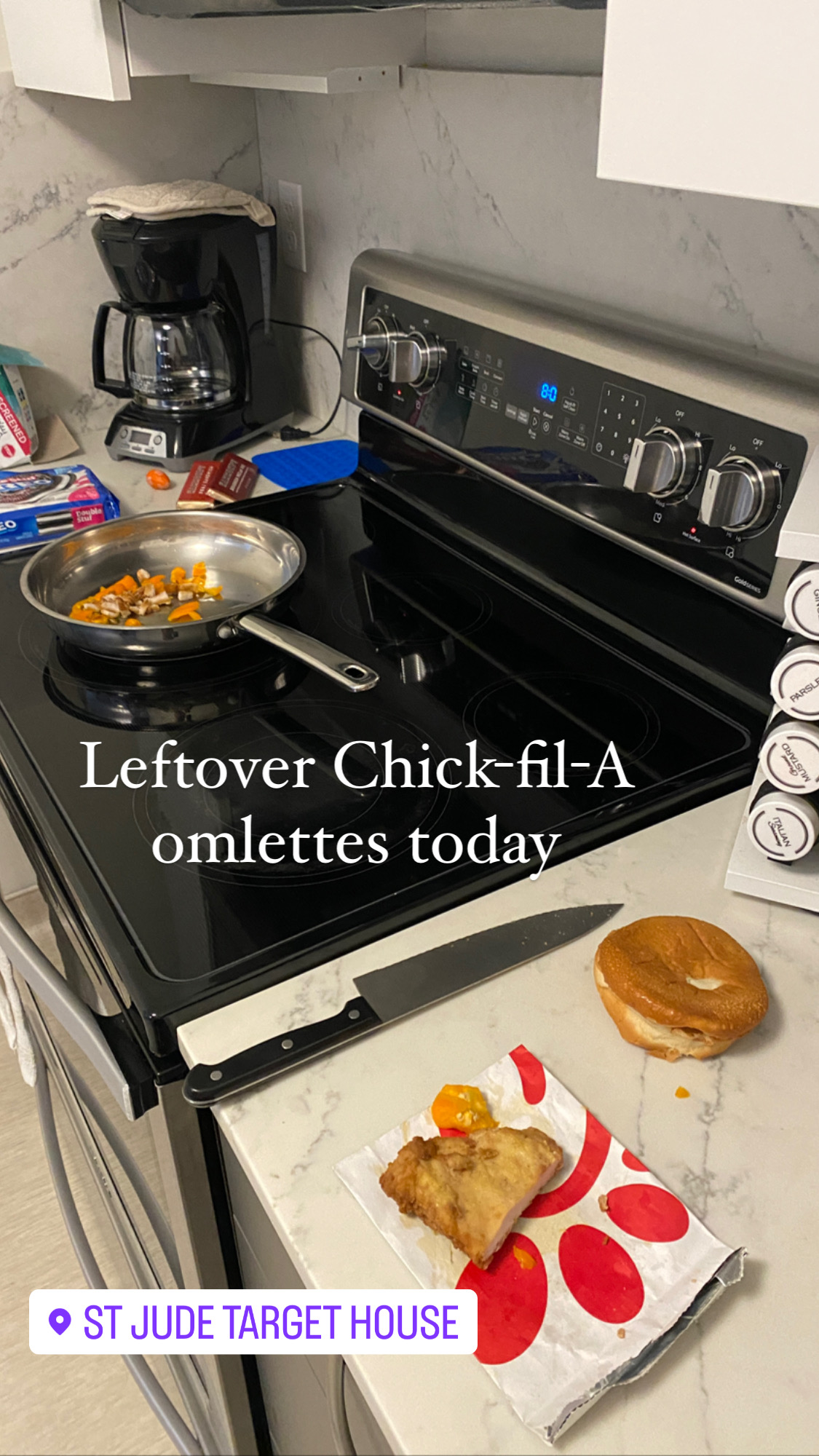 First appointment of the day, speech therapy had Summer working on some “duck lips” and other facial exercises to get her right side moving again.  The therapist saw some quivers in her cheeks and said thats a good sign.  She also pulled out a mirror and had Summer look at it as she talked and exercised.  It appears to work.  (Trained professional who knows better than us I would suspect).   The key takeaway from these activities is that Summer needs to be working on this outside of the therapy room.  Make sure you are asking her if she is doing her “pouty Instagram face” when you talk to her.

After that, we met another Dr. Moustafa.  While very similar to what speech therapy was doing…  Dr. Moustafa and her assistants were looking more at the mechanical and neurological actions of her face and hands.  I may have mentined this, or not.  It all blurs.  Summer cannot feel heat or sharp pain in the index finger and thumb of her right arm.  They move and she can feel pressure…  That’s it.  The doctor and assistants did a battery of tests to see where the “dead” sensation areas are.

After checking her arms and her face for muscle movements..  Dr. asked Summer to take a walk.  Summer had to do some exercises of walking heel to toe in a straight line.  It was not easy.  She determined that Summer should be working on balance more and more… If it’s not practiced… It will not get better she said.  We did joke that Summer could still do the “floss”.  Dr. Mostaffa had no idea what we talking about.  She’s probably my age but must not have any kids who played Fortnight.  She said she would learn if Summer would promise to exercise!

Both of the recovery specialists told us the same thing.  Practice!

Reminds me of a joke…  How to you get to Carnegie Hall?

You might think it’s interesting that Dr. Moustafa is a similar name to our previous surgeon back in Illinois.   Ironically, this Dr. Moustafa worked at CARLE years ago and knows our surgeon from Champaign.  She said mail would always get crossed up.  Small world.  Her info:  https://www.stjude.org/directory/m/manal-moustafa.html

Next up was Social Work.  We were running late, so we had a few minutes to fill out paperwork for Angela’s FMLA and talked a little bit about disability.  Yeah, that’s a thing we have to do.  We will be logging into a Federal website of some sort to get her on whatever disability she can qualify for at this moment.  Anything helps.  If it’s anything like my dealings with the fed in the past…  We will be making plans to get off of it by the time we get it nailed down.

Last but not least for today’s appointments was “teen life” or Young Adult Life or something like that.   I had talked about running into Bryan in the TriDelta house last week and that his son Ben was coming back for some of his last treatments after starting this process last year.  Bryan had texted me the other day to tell me they were back and that Ben would be at the young adult’s support/social group today.  They have a standing meeting every Wednesday that has a smattering of kids showing up depending on who is in town or who is getting therapy.

Summer reads this, so I am not going to get to deep into it… But I could tell she was excited.   We were there early.  It was almost one of those moments where the kids obviously wished their parents were nowhere to be found.  We let her go to the group alone once she knew where it was at.  The meeting runs about an hour and she texted us after an hour and five minutes to tell us she was running long.  Once she met up with us, she said she got all kinds of contacts from other kids.  She was upset that Ben was all done.  “He plays magic and knows the same board games that I do.. But he is leaving tomorrow”.  She also got a bunch of phone numbers, and Snapchat addresses and it seems to be a group constantly active.  Especially during dinner! 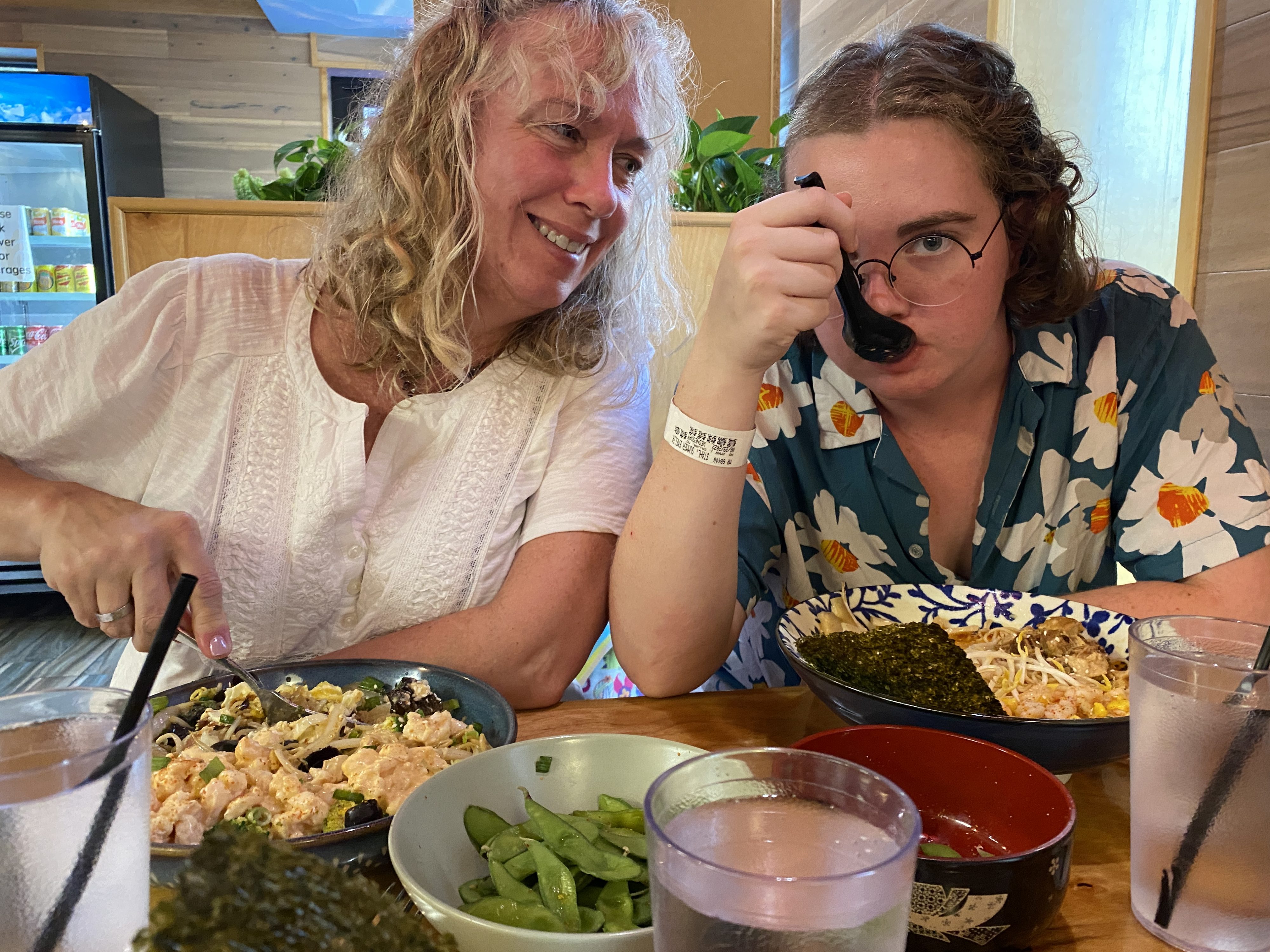 This afternoon…  We had to go to IKEA.  Did we really have to?  I doubt it.  As a matter of fact… I suspected that dollar general would have everything we needed for the Target House room that is missing.  Door hooks, tin foil, and a mop.  Somehow my daughter roped us into getting 3 or 4 plastic plants for her room (no real plants allowed) and a decorative pillow.  OK… I love my kid.. I’ll be patient.

Our whole apartment is covered in linoleum and honestly, it looks pretty clean to me.  But when my wife found a sticky spot on the floor the other day (must have been when I was in Illinois)… She asked the housekeeper to borrow a mop.  They did not have a mop.  Did they say they don’t use mops?  Ang was agast!  This will never do.  Mop-quest for conceived at that moment.

After IKEA, we went to Wal-Mart.  A shower drain “screen” for hair that keeps clogging up the drain was acquired.  But Wal Mart did not have a mop.  I am not kidding.  No mops unless you wanted an old cotton one.  I was not volunteering to wring that sucker out by hand.

Ang then went to Lowes in search of her dream mop.  Summer and I sat in the car.

I was getting tired, we had a busy day and it was 6:30!  Well… Not that tired.  We went over to a game store called the “Cave” and took a look around.  EVERY BOARD GAME EVER MADE was in this store!  I even texted my buddy Mark a picture…  Knowing that his flip-phone would probably start smoking and catch fire from all the pixels.  Summer found a Magic “card” she wanted.  It was 2 bucks.  Big spender.  We brought a bunch of games down to Memphis with us and really didn’t need to buy anything today…  But we will probably come back at some point to find something new.

For Supper… We began to argue about where to go.  I put it squarely in Summers’ lap.  It’s her crappy day tomorrow.  First… She said pizza.  I reminded her, ever so gently, that she will be released from ICU a lot faster if her bowels are moving.  Pizza was not a good choice tonight.  We thought about it some more.  She, like me, keeps noticing this little restaurant down the road from us called FIRE RAMEN.  I pulled up the menu and we begrudgingly got Angela to play along.

It actually turned out well.  Unlike some noodle houses… Fire Ramen had more than just Ramen.  Angela got a Seafood Yakisoba and was very pleased!  I killed my bowl, but the girls brought home leftovers.  Our fridge is always collecting leftovers!

Tonight, everybody, but I is in bed by 9:30 (I’m sure Summer is still awake) and we will be up and at the hospital before you wake up.  Wish us luck that it goes as smoothly as the Dr. predicts.