No update yesterday, it was a jam-packed day back home for me.  Work, some socializing with the fellas after work and dinner with Joel, Lynette and Noah.  I finished the night hanging out with Aiden and nearly falling asleep on the couch.  (I’m such a Dad!)

Angela did give me lots of feedback from her 1 day without me.  I had taken the Fort’s Sienna back with me on Sunday and left her at the mercy of the St. Jude shuttle system.  A free shuttle that we have never had to use since we arrived.  When we were initially onboarded at St. Jude, they set us up in a housing unit ON the campus of St. Jude.  It was a short walk to the main hospital entrance from the TriDelta house.

Moving to Target house is awesome and amazing… But it’s a 5-minute drive away.  It’s a VERY long walk.  Especially with someone who is undergoing major surgery and therapies.  So, the shuttle is a must unless you want to pay your own UBER.  Why would you do that?

Well, Angela might have paid for the UBER after her first round of bus travel.  They waited for the bust that was 30 minutes ahead of Summer’s appointment only to find that it was completely full.  Then, they went to the other side of Target House (Target House 1) to catch the bus before others loaded it up.

In the middle of he transportation drama, I get a call from Angela complaining. I’m 409 miles away at work! She was railing on me about how in-convenient this convenience is.  LOL.  I think she was stressed.

We have talked about it…  We really need 2 cars down here if we are going to switch back and forth.  I rushed back and we are both here right now (Tuesday night) because her surgery was supposed to be tomorrow.  (Been bumped to Thursday).  But, once she leaves for Illinois, she would leave me without the car for the next week or two.

That’s where Lifeline Pilots steps in to help.  Todd and Darla had clued me into this service when we first started talking about going to Memphis.  Volunteer small craft pilots will fly patients and families based on needs to small local airports across the midwest.  Maybe further?  Very cool service, but I was skeptical with high gas prices if they would be so friendly to flying a parent to Pekin or Peoria airport.  I submitted a request on their website nad within an hour they were reaching out to Angela to talk about what she needed.

And guess what?  They are totally cool with flying her back this weekend!  No charge. Seems insane…  But nothing has seemed sane lately, so I guess it all makes sense.

Angela will fly home and then when it’s her turn to get down here… She can drive our Prius down…  Which is awesome…  Since I am driving a Fort’s Prius Prime.  We can have dueling Prius’?

That was yesterday.  Today…  The big news:  Surgery was bumped.

No scary reason.  We were told that we would be at the mercy of emergency surgeries.  So, it’s not a big deal.

Angela and Summer, took the shuttle, (successfully!) to see doctors and get the presurgery and consultation out of the way.

There were a few moments were the St. Jude surgeon told Ang and Summer that the skin graft, titanium mesh and Summer’s facial paralysis could have been avoided.  He was a bit critical of the surgery at CARLE, but we really can’t look back on that and complain.  We were up a creek and were relying on the information presented as it was rolling out.  The surgeon did say there are some remedies for fixing Summer’s smile.  It will require future surgeries and manipulating muscles.  It may also be needed because she could have some droop.  All the while I was driving down to Memphis today, I was thinking about this.  I hate being alone for too long and being awake.  This is the stuff that sucks you in.

For example, I woke up Monday morning at 3AM… Well before my 6AM alarm…  And did the same thing.  Just tossed and turned thinking about everything going on.  This is the hardest part as a parent from my perspective.  Worrying about unknowns and worrying about things 6 months, 1 year, and 5 years down the road.  We really have to focus on today, and when we do that, I am just fine.

Tomorrow we have 4 appointments.  It will be busy. 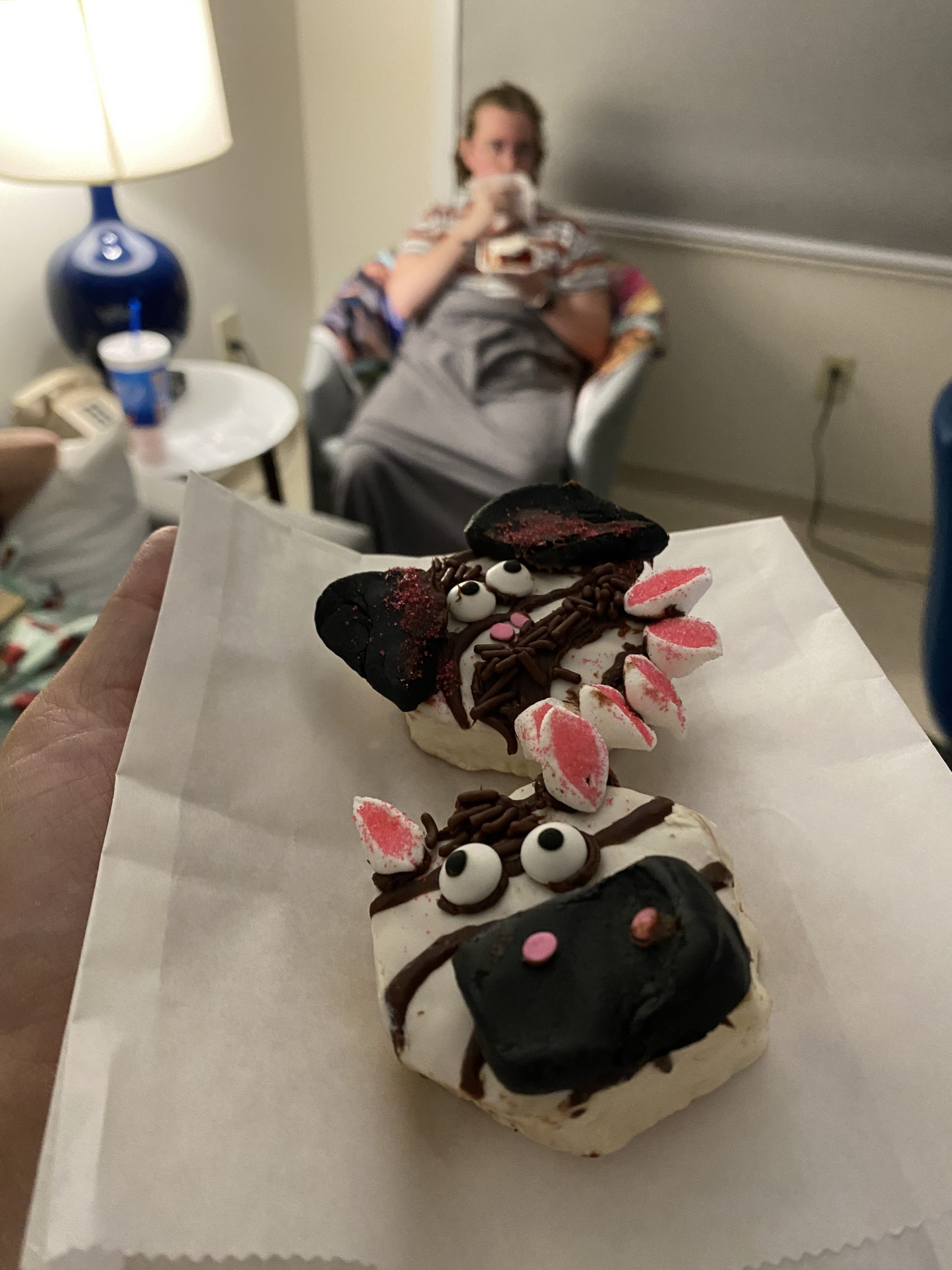 I know some people were wondering…  They only allow 2 people in surgical waiting… But afterward, we do not have a limit of guests in her room when she is recovering in ICU.  That’s ok… But we won’t have nearly the line of people waiting to see her here in Memphis the way we did in Champaign.

On a great note…  Nate, Summer’s boyfriend is coming down on Thursday.  The last time she was recovering from surgery, his presence was very welcome.

Tonight, after I got to Target House.  Summer excitedly showed me what she did after appointments today…  Target had donated bookbags full of games and little fun bits.  Its really nice stuff.  Along with that…  She participated in the ZEBRA Cake decorating activity they held down in the lunchroom.  Not familiar with Zebra cakes???  Well, I took a picture to illustrate.  Grab a pack of Little Debbie Zebra Cakes… And then add bits of candy, eyeballs, and marshmallow decorations.

You end up with an edible creation.  Well, edible to me.  Angela and Summer wanted nothing to do with them!  I have no qualms about eating well-fondled sugary treats.  They were delicious.

Angela did meet up with Darla and her son Carson today in the cafeteria.  Apparently, they all went out to diner last night as well.  This is great.  We are making lots of contacts every day we are here.  Brian, the Dad I talked to about the day about his hat texted me today asking if we were in town.  His son Ben will be at the “teen life” session tomorrow that Summer is going as well.  So, maybe another connection will be made.

All of this activity is good.  The more people we talk to and glean info from, the better.  It helps keep my mind stay busy and maybe I will sleep before we get up at 4:30AM on Thursday and head off to surgery.