Did I mention she hates needles?  Today, before the battery of tests under anesthesia, Summer had to get an IV port installed.  The nurse could not get it done…  Summer was shaking and in pain from her attempted stab at her right hand.  It was a no-go.  The nurse got the vibe that Summer might pass out so she called for support.  A few minutes later the special ops team showed up with the ultrasound.  We moved Summer into a room with a bed and confidently inserted the IV port.

Summer asked me if it was in… It was… But I did not see any blood, and when they backflushed, she didn’t “taste” it.  I told her it was not right…  But the nurse told me it was.  OK… They seemed like they knew what was going on so I was confident she was all good.

We headed to the MRI a few minutes late and were ushered right in at 10 AM (ish).  Summer went back to the MRI room by herself and Angela and I planted ourselves in the waiting room for the long wait.  We knew this scan was going to take a long time because they were going to scan her brain and her whole spinal column looking for tumors or trouble spots.  Along with that, while she was sedated, they would do a spinal tap.

About noon the nurse came out to talk to us…  We thought the MRI was done and Summer was in the recovery room.  Nope.  Her IV was not working… They had tried to add anesthesia to her port and nothing happened… Where it went, nobody knows.  She never got sleepy and the MRI tech and staff asked her what was going on…  She couldn’t answer.  Eventually, they attempted another IV Port and got her to sleep.

We were already 2 hours late.  In the meantime, the St. Jude “Ap” starts bumping all of our appointments for the remainder of the day onto Friday’s Schedule.  I had to contact Uncle Steve to tell him our lunch engagement was now off.  (Back on now Steve if you read this before we talk).

At about 3 o’clock we finally got our kid back.  Summer was in a wheelchair because she was out of her mind from the double-dip of meds.  I asked her if her back hurt from the Lumbar Puncture, and she said she couldn’t feel anything.

We headed over to “E” for a post-scan meeting.

Dr. Gajjar was waiting for us when we arrived.  I was surprised.   But I did know from our previous conversations with our nurse that he only works at the hospital on Tuesdays and Thursdays.  I was hoping we would not have to wait till next week to hear his readings on the scans.

He said, “I want to show you the images” with a determination that I was not understanding.   I read body language for a living and have not figured his out yet. Was this good or bad?

Summer was still half asleep and covered in a stack of blankets…  We rolled her wheelchair into a small imaging room with the Dr, Nurse Kathie and Angela, and me.  We proceeded to go through scans from SIU, CARLE, and today at St. Jude.

It was confusing.  We had to wrap our minds around everything done at CARLE and the procedures that were done there.  This may shock you, but I am not a brain surgeon.  So, some previous notes I have written down in the blog were wrong.  Sorry.  I misunderstood, or oversimplified.

Here is the long and short.  Summer will need additional surgery.  She still has a 1.5 by 2cm tumor at the base of her brain. 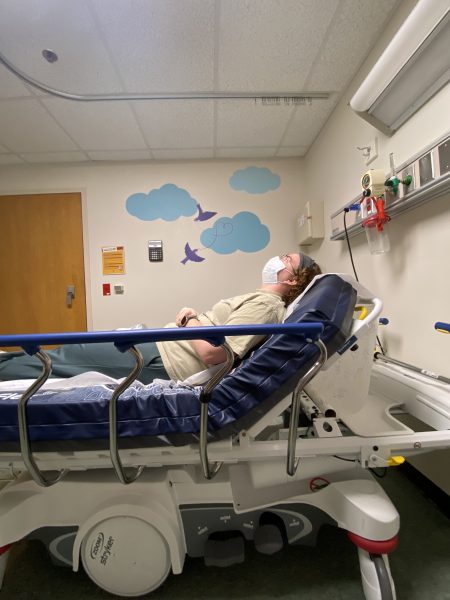 Dr. Mostaffa and his staff with their tumor removal did open up a ventricle to allow the flow of fluid in her brain, but the remaining tumor would need to be removed before St. Jude will do Proton treatment.  I had understood from Dr. Mostaffa that no more could be removed during his surgery without damaging her brain permanently.  We knew that the tumor was left behind, but we thought that Proton would be used to kill the rest of the tumor.

Gajjar said that their surgeon would remove 100% of this tumor and we should not expect any additional motor function problems.  As a matter of fact… She should be able to walk out of the hospital 5 days or so after to her new room at Target House.   Additionally, she will not need a drain to stunt either.

After the surgery, Proton blasts will be used on her brain and spinal column to kill any other particles.

The surgery will happen next Wednesday.

So, we have a plan as of today.  Summer was not happy with this news.  I sat with her tonight and talked her down.  She really did not comprehend as much as I thought while still under the effect of her drugs. She does not want to learn to see again! I reiterated the conversation she partially heard. Surgery sucks but the upside of having it with St. Jude should make this far less scary.  (If only they had Stat Steve!)

Oh, and the reason her back did not hurt from the Spinal Tap?  Dr. Kajjar was there reading the scan while it was being done.  He could tell that additional surgery was needed and there was no need for the tap until after the surgery next week.  Good deal!  He is on it!  The less needles the better!

I pushed Summer back to our housing at Tri Delta in a wheelchair.  She was still covered in blankets and was sleepy (or depressed).  We saw on the calendar that a local BBQ restaurant had supplied dinner for the residents of our housing unit.  One & Only BBQ had a smoked turkey meal with mac-n-cheese, beans, and muffins.  We grabbed 3 meals and brought them to the room.

When Summer finally came back to life, we sat in our room around our little table and had dinner.   Normally, we get free dinner in the cafeteria, but this was hot and good without having to leave.

It was great.  Spirits were lifted.

We rented the “Lost City” on Amazon and all had a good laugh.

Then Gramps called and we made fun of him.

Yes, she needs surgery, but it’s not as scary now.  The day could have been worse.