When you do a Stahl family road trip… You have to apply a little strategy to your site selections for stopping.  You have to know that the first day and last day will have the most drive time.  With that… You also know that kids (adults!) and spouses get the most anxious after lunch for a stop.  With this in mind… We left bright and early on Saturday morning with the goal of driving nearly 5 hours to Miamisburg Ohio. 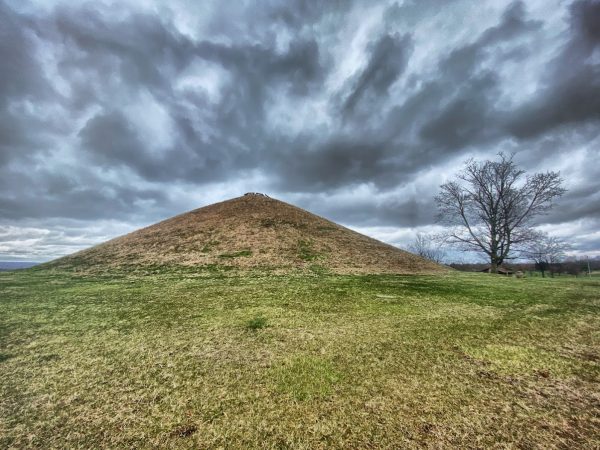 What’s in Miamisburg?  Well, only the largest conical mound in Ohio!  An ancient Native American earthwork…  Shaped like a cone.  Does that explain it well enough?  Why?  The nice thing about mounds and earthworks is the admission price and the chance to get in a walk.  Unfortunately, as we cruised across Indiana and Ohio the temps were dropping and snow was falling.  Snow was actually sticking to the ground for an hour of our drive and it had me ready to make an executive action and turn the van south to Florida.

We hopped out of the van at Miamisburg and proceeded to freeze our toes and fingers off as we were hit with a cutting wind from whatever late-season polar vortex was terrorizing the midwest.  Miamisburg mound has a staircase that goes to the top and we all ran up and took a quick look.  It was soooooo cold!  We ran down as fast if not faster than we shot up the hill.  This cold air would be a common theme for the next few days.

We ate cold sandwiches in the car and talked about how cold it was outside.  Everyone was begging for news that our next stop was not another outdoor site. 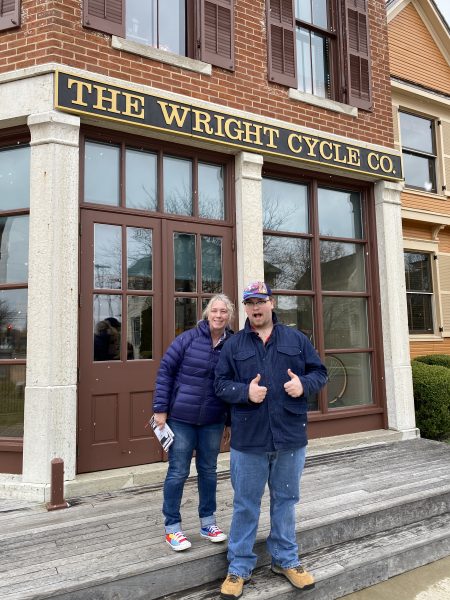 Good news, the next stop was Orville and Wilbur Wright’s bike shop in Dayton Ohio.  It was only a few miles away.  We had a great visit learning about Kitty Hawk and Dayton’s relationship to controlled flight at the NPS Aviation National Park.  They flew for 30 seconds on the beaches of North Carolina…  But it was in pastures near Dayton that they flew… And flew… And flew.  Great stories here.  Jr. Ranger badges were acquired for the ladies.  The video presentation at this stop is great, I highly recommend it.

We did take a moment to stop by the Arnold Swartzenager statue near the convention center and wandered through a small park by the college that presented Sunday Afternoon on the Island of La Grande Jatte in the form of shrubs…  It was neat.  It was still cold and I almost got attacked by a goose when I wasn’t paying attention.

The last stop for the first day was the Newark Earthworks in Newark Ohio.  To say this sight is ma 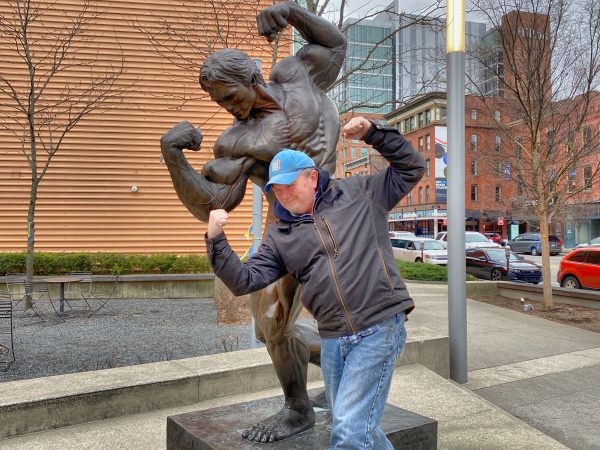 ssive would be an understatement.  It was an amazing sight to walk out into a giant earthwork that wrapped around you for acres and acres.  How could they do this by hand???  Unfortunately, we got to the park after it had closed.  You could walk the grounds, but the visitor center was closed.  Oh, and it was still freezing… So we left much earlier than I would have normally.

That night I succumbed to the pressure of the group to eat dinner at Ruby Tuesday in Cambridge Ohio.  Everyone buy myself has some kind of softspot for this chain that bailed on central Illinois years ago.  I never cared for it either way.  I got the salad bar, but I remember that was always good.  Everyone else got sandwiches and pasta.  $75.00 we were done with a mediocre dinner and I swore I was not eating at any ore chain restaurants the rest of the trip.  (I think we completed that task)

We spent the night in Cambridge and started making plans for Day 2. 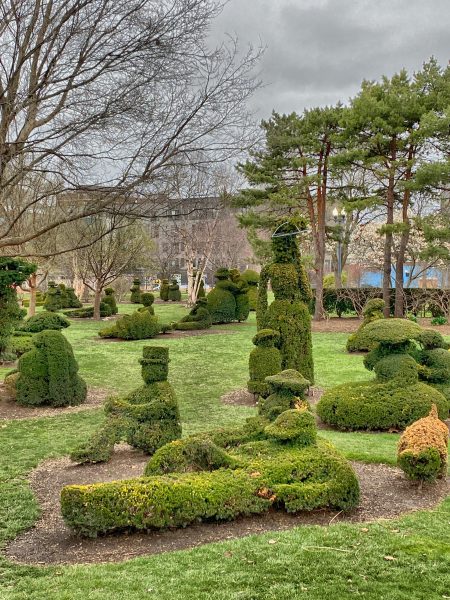 Making plans?  Dont you have this whole thing figured out ahead of time?  No way.  As a matter of fact.. I was a bit put-off that I had to make reservations for Falling Water a few days in advance.  That’s not how I travel!  I like to keep the plans fluid.  As you can tell from my map on google… I have a lot of sites I want to see.  So, if we are in the area, we are going to make the side trip.  For Sunday… I had to find a few things to do before we visited Falling Water at 3PM.  I knew that Graves Mound was close.

Graves Mound (in the finger of West Virginia) has a storied past with scandals after it was excavated in the 1800’s.  I used my handbook that Nate got me for Christmas to tell the story of the bogus artifacts used to help sell tickets to this mound eons ago.  The story of the early European scratched supposedly found during excavation were signs that this mound was created by an intelligence beyond the native Americans from thousands of years ago.  It’s intriguing and I was hopeful that the museum would hold some stories about the first excavators and their findings.  Unfortunately, the museum is closed on Sundays.  But we still took a quick look.  What was cool, and it was mentioned in my book, was the ancient penitentiary across the street.  It had that look that all old jails do… Menacing and scary.  As we sat in the parking lot of the mound, we watched car after car pulls up and park.

It was not mass or a church service that was bringing them in.  The jail was hosting an “exotic animal” flea market.  We had to take a quick look…  We made a quick walk into the heart of the prison to the admission table and saw a pretty wild crowd.  No Joe Exotics… But it looked like it could be an interesting time.  Unfortunately, I knew we did not have time for this…  We had to move on to another NPS site that Summer had found.  Friendship House.  It was on the way to Falling Water and it was another chance to grab a Jr. Ranger badge.

Friendship House.  I had never heard of it.  That’s the funny thing about a stop like this.  I have no expectations and figure it will be a 10 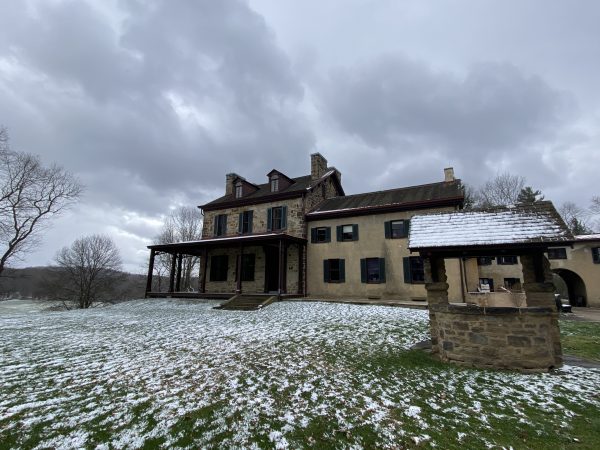 minute stop.  Boy, this one over-delivered.  We learned about Albert Gallatin.  The Swiss immigrant who came to America to make his fortune.  He eventually made a career in politics while dabbling in all kinds of business ventures.  He built this house out in the western corner of Pennsylvania for his first wife who promptly died 6 months after marriage.  He married again and took a role in the new federal government as an ambassador to France.  His second wife really did not want to live in the countryside after spending time in Paris and DC.  He eventually gave up on the notion of living full-time at his dream house.  His family did improve and build on the space over the years, but it fell into disrepair with later owners.  The park service took over a dilapidated Friendship House in the 1970’s.  We learned a ton and admired the property for its rural beauty.  Gallatin was a contemporary of Thomas Jefferson and his life goal was freedom from taxes and government oppression.  He was an early Libertarian!

I swear to god, I didn’t pick this place out.  It was serendipitous, to say the least.  Later, on the way home, we stopped at another National Park and Albert Gallatin came up again…  And and Jeffersons Home.  Crazy.

The final stop of Sunday was Falling Water.  I yell at my kids all the time for not knowing who Frank Lloyd Wright is.  I always say “What are they teaching you in school?”.  Apparently, nothing about architecture!  And, I sometimes wonder if I learned about some of this in drafting 101 and 102 with Mr. Schlickman?  Or did we see something else as a kid in Chicago?  I don’t know. 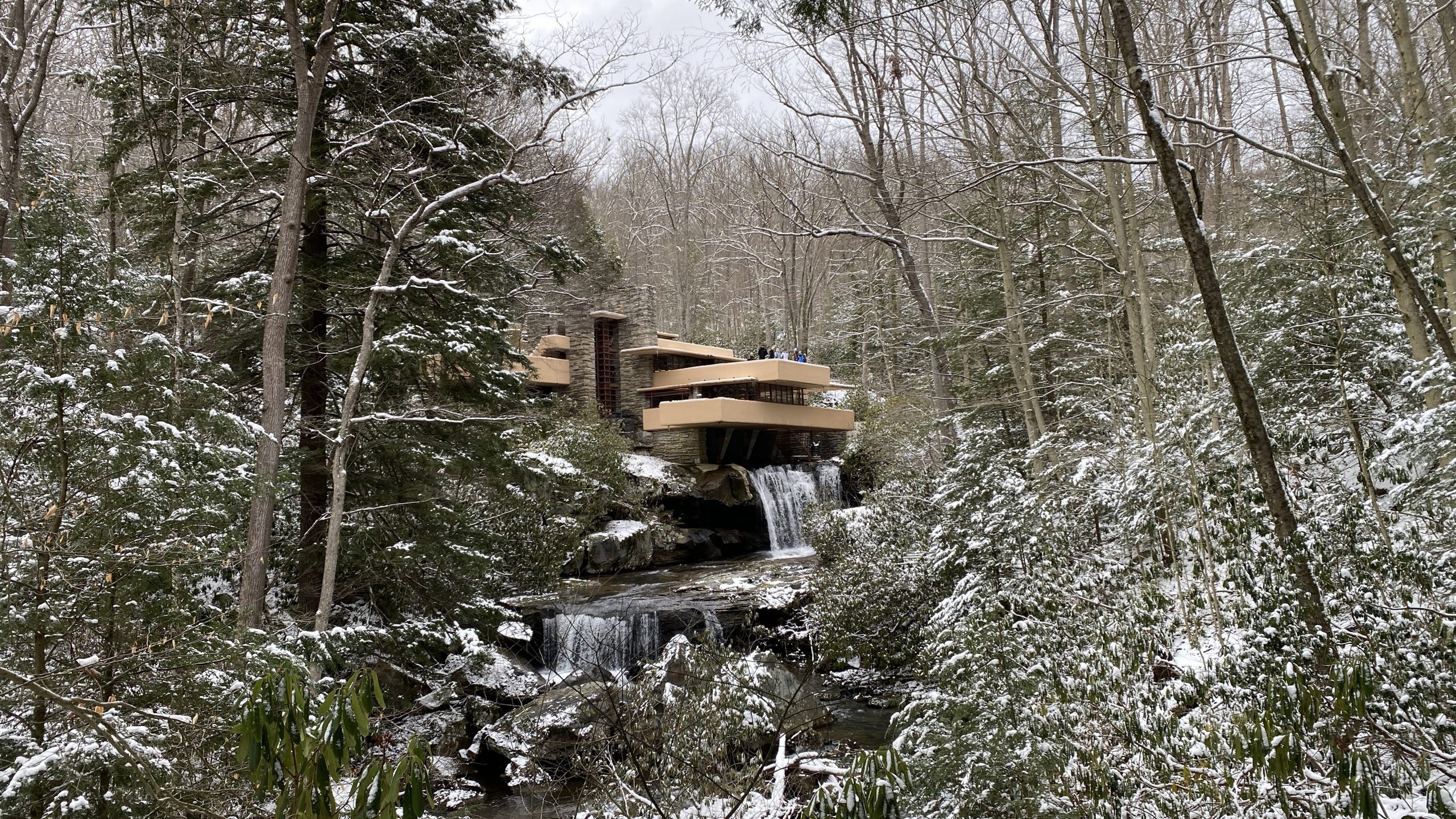 I do recall that you could not tour this house in the 90’s.  I am pretty sure Angela and I wanted to eons ago and it was not convenient at all.   You probably had to call and make a reservation.  I never did that!

There was a lot on the line for Falling Water.  We have wanted to see it forever… Hopefully, it would not disappoint.

When Angela was journaling at the end of the trip, she asked all of us what our favorite part of the vacation was?  I thought about it for a minute and had to say “Falling Water”.  It was that good.  The Foundation that runs the area comes off a little snooty, but this house is absolutely a working piece of art.  And if that means everyone is a little strict about behaviors and touching things…  Well, so be it.  Our guide for our hour-long tour was Sandy.  She was great.  You could tell she loves talking about the house and everything about it.  Artwor 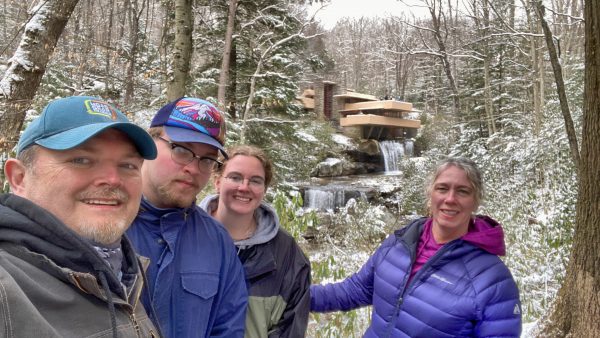 k by Picasso?  She can tell you about it?  Structural movements of the building, she knows how to explain it.  Furniture styles.  She knows that stuff as well.  This was one of the first stops where I wished we had something amazing like this in Central Illinois.  Great retirement job!

It was snowing and the drive to Falling Water started to get a little sketchy.  I was a little bummed that we would be cold running like everything else to this point.  It actually didn’t bother us too much.  The house and property are remote and in a little valley.  There was no wind.  A couple of inches of snow was building up here and there on ledges and rocks… But it actually added to the aesthetic.  Plus, our tour had us going in and out of the house… So, we were never terribly cold.  I honestly think my pictures with snow look better than they would have if I had been there on a normal spring day.

Falling water is a well-preserved monument to a maverick in design.  It’s unfortunate that a house like this could never be built today.  No zoning commission would ever allow a house to be built over an active stream.  Imagine your flood insurance!?!?!

After we ended our amazing tour…  We didn’t hang out to walk the grounds…  Because…  It was cold!  That’s ok…  We headed down to Tyson Virginia to stay at a nice Wyndham Suites.  I’ll tell that story in another post.