Short update tonight.  I was back home today and had to get my news through Angela’s texts.

As expected, Summer checked out fine for the removal of her brain drain that had been helping her keep cranial pressure from climbing too high.  It had been capped for 48 hours, monitored and tested by stories of falling rats and white-hot games of Yahtzee.  Still, in the end, Summer held her pressure fine.

The line was removed in a short and painful procedure.  Dr. White made it sound like this would be relatively painless.  But Summer said it was painful as heck.  A few nights ago, I heard her dropping some salty language when the nurses were trying to get an IV line.  I’m sure she had some choice words during this procedure as well.

It’s done, that’s all I care about right now.

We are relieved.  This was one of the items that Dr. Mostafa had warned us about when he finished up surgery last week.  There were risks of infections and the risk of adding a stunt that would drain this fluid to her stomach if she could not get the pressure under control.  I know it’s a little thing, but I was really hoping she could avoid this.

With the removal of the line, Summer has been moved out of Critical Care.  She is now on a “normal” floor.  Not the technical term, it’s mine for lack of anything better.   I do know this, and Angela said it today as well… We are going to miss the great nurses in CCU.  Mikki, Jen, Abby, and Daryl were standouts.  Thank God for them all.  They make a scary and terrible place like a hospital feel a lot more bearable.  I can tell you great stories about all those nurses mentioned above.

The new floor is super strict about visitors.  So, be prepared for a shorter visit if you plan to come by.  Ang and I cannot spend the night anymore either… Which, will probably be a good thing.  I came home last night and slept 9 hours.  When I woke up, I felt like I had been in a fight.  Sore muscles, joints, and a clouded head.  (I just had COVID a few weeks ago so that was not it!)  It was a few days of 3-hour periods of sleep and 1 real meal per day.  It was brutal.  I hope we are done with weeks like those.

We are not expecting a lot to happen on Sunday.  Except maybe some Poo?  When I talked to Summer on the phone earlier, she said she is still stinking the place up… But nothing has popped out yet.  The strategy, according to her a few days ago, was to pull the line in her head and that would release the mental block happening in her body.  I knew it was flawed logic, but I was willing to believe anything if she believed it!

Summer is quite thrilled that she has a private bathroom again.  This and the fact she is allowed to “go” by herself after today’s procedure feels like giant leaps of progress.

Oh, and with the drain removal…  She can now sleep flat.  Something she has not done in nearly 2 weeks!

Pray for an uneventful Sunday!

I did come home for a major reason.   Fix the mower.  It’s been idle for a few weeks and I had to repair it so that Aiden could get mowing while we are gone.  I got that accomplished and set off to touch up La Finca. 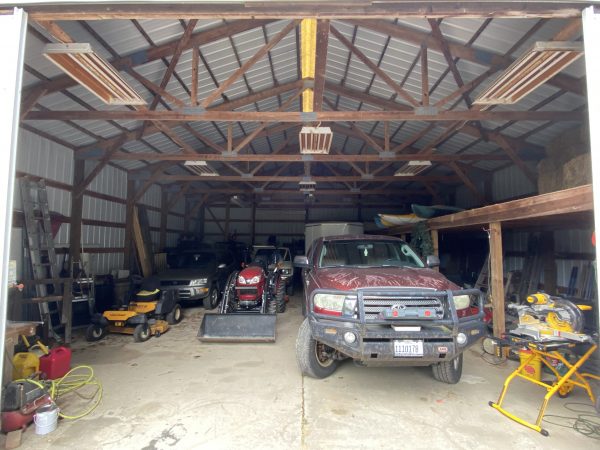 Dominic mowed my yard again.   What a lifesaver.  He told me that my neighbors had mowed half of it and he was getting better at finding all my paths around the ranch.  I came home with the purpose of fixing the mower and the mowing jobs.  I gotta tell ya… My yard looked great.  There were a few spots that I knew were not quite right, but most people would never notice.  Kudos, Thanks, and Blessings…  to Dom and my neighbors.

I then took the morning to move everything around the garage like it was winter.  The horse trailer and Tundra, Summer’s RAV4, and Lil’ Mule are all put away for the next few months.  There was no reason to litter the driveway with cars and trucks, not in use.  Maybe it will feel like spring all over again when we pull them back out?

The tractor and mower are still within reach so that the stig can mow while we are gone.

To be clear…  We know we will be gone initially, but Angela and I are still trying to wrap our heads around what will become of our schedules during the St. Jude time.

My employer has been outstanding with support.  I have lots to say about Fort’s and how Ang and I have been using a new Prius Prime to get back and forth from Champaign for much cheaper than any other car on the road.    Angela is saving her banked hours for a time at St. Jude.  We have managed to try and please everyone so far…  Unfortunately, logistics are going to majorly shift.  Its going to get hairy in all directions really soon.

2 thoughts on “Recovery 9 Drain Removal and a new room”