This morning I did make it to the room before Mikki our nurse took Summer away for the CT Scan.  I only woke up once to double-check my phone to see what time is was. I was so paranoid that I would miss the alarm! 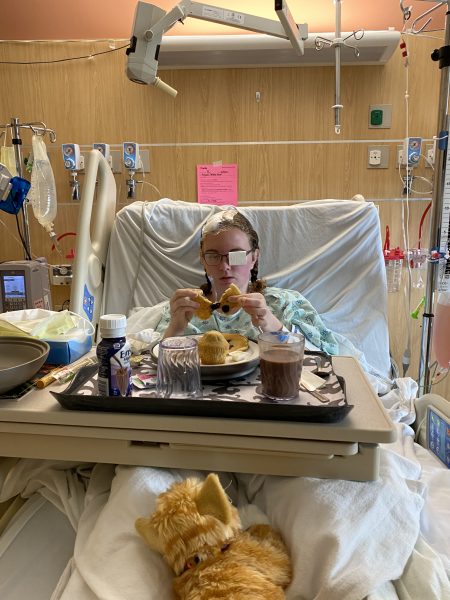 The scan was said to be good by Dr. Johnson and Dr. White.  They came into the room together and were disappointed that Summer had taken some pain meds already this morning.  They wanted to take the hose out this morning!  Huh?  Didn’t we already go over this?  Mostafa had said 48 hours.  I took that news and called Angela.  She was at work but was not happy that this time change was leaving her out of being at CARLE for the procedure.  (Honestly, I have been told a few times now that this removal of the hose is not a big deal.  A Shunt is a big deal… And we are never speaking of that!)  I also posted it on FB and our family texting group.

It was 10:30 and I needed to get moved out of the CARLE house.  Our checkout time was 11AM.  I got down to the registration desk and started talking with the manager.  She asked how Summer was doing and asked if we needed more days.  We do!  She said they were not busy at this minute and said we were good till next Wednesday.  Awesome… That was handled.

While I was downstairs unpacking…  Dr. Mostafa swung by the room to tell us that Summer would NOT be getting the drain pulled today!  I knew that.  I said that to Johnson and White… But I cannot figure out the communication disconnect here.  So weird. I texted the family, got Angela calmed down, and told her not to rush over.

Summer did hear from Physical Therapy today.  They were going to retest here about drinking viscous fluids.  This would be a relief, and would probably help her get more fluids into her system for her poo problem.   They stopped in after lunch and said “back in 5 minutes”.  We got to 4 PM this afternoon before we gave up hope on them showing up.  That’s frustrating.

Oh, did you get that part about the poo?  Still no poo.  All day today no luck.  She can smell up the room… But that’s about it right now.

This afternoon I got a call back from Jean at St. Jude.  I was waiting for her to say that she did not have squat from CARLE (Because I have been frustrated and lose my faith in people sometimes) but I was wrong.  I am quoting here…  “I just got off the phone with the nicest doctor there at CARLE…  Dr. Barnett”.  I was soooooooo happy.  I totally agree with Jean’s assessment.  Dr. Barnett is pretty great.  He was the one who talked me off the cliff the other night when we were talking about continuing treatment for Summer.  Jean said that Dr. Barnett was following up with everything St. Jude needs to get for transfer.  I am still prepping for next weekend based on Summers’s progress today.

I keep joking about her poo… But Summer’s progress is awesome. Every day her eyes can move a little further left and right.  She is still having problems tracking both eyes together, but that will come.  I am ready for this hose to come out so she can walk and get some mobility.  She’s lost a lot of strength laying in that bed for 2 weeks.  She’s going to need it all for St Jude!

I did take a picture of her neck scar and showed it to her, (I deleted it!) and she was blown away a the size.  I had not seen it till today and it confused me as well… I thought we were going in behind the ear.  Anyway… She got a battle scar from this procedure. 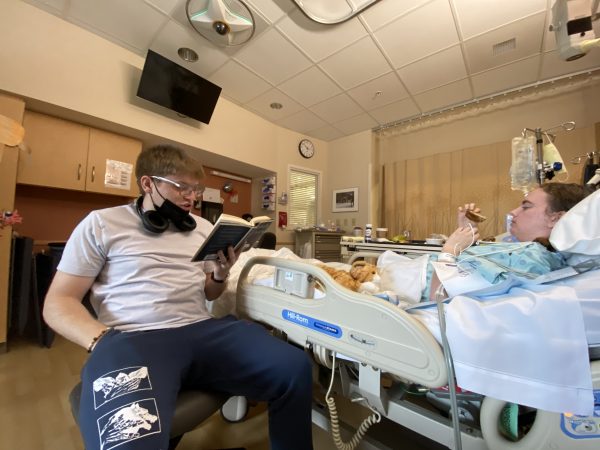 Summer’s friend from HS, Connor, and his girlfriend stopped by to see Her tonight.  When they showed up, our nurse was in the room within seconds to boot out 2 the extra people. It’s so weird how the nurses vary in their styles.  We were cool and completely ready to remove 2 occupants for the 2 replacements.

When Connor asked earlier in the week what he could bring.  I had no idea.  No flowers for sure…  But I got lucky midafternoon when Summer went on a rant about something she was starving for.

I texted Connor and said there was an inexpensive but thoughtful gift he could grab that would make her week.  Strawberry Pop-Tarts

Summer has been dying for a fruit-filled pop tart for days.  The CARLE house has brown sugar ones. Days before I had brought her one of those and she completely snubbed it! It’s just a little thing, but this box of carbs and sugar delivered happiness!

I was then told to never touch them.

Nate leaves tomorrow.  He has been with Summer for 2 weeks by her side during the highs and lows.  I give this kid tons of credit.  His parents are coming tomorrow and I am going to miss them.  I would seriously like to thank them for raising a good kid.

Also…. I came home to fix the mower and get the yard tightened up. Dominic mowed it AGAIN for me this week.  Wow…  Thanks dude.  I will not have much updates and certainly no pictures.  I will share if anything pops up.  Should be a laid-back day with a drain removal.

The GoFundMe.  Just a quick note… I dont know everyone who is donating!!!  I am trying to go through and write some messages but about 1/3 are unknowns.  Mom, Angela and I are going to have to sit down (maybe Sunday) and look at the names.

I am praying this all goes smoothly and we have a big chunk of money to hand over to her when she’s ready to go back to school.  That’s why I am leaving the fundraiser open.  Cancer treatment is bad enough… But I want her to be stress-free when she heads back to SIU.  The 18,000 total that has wrung up should do that.  Thanks again to everyone who is kicking in!