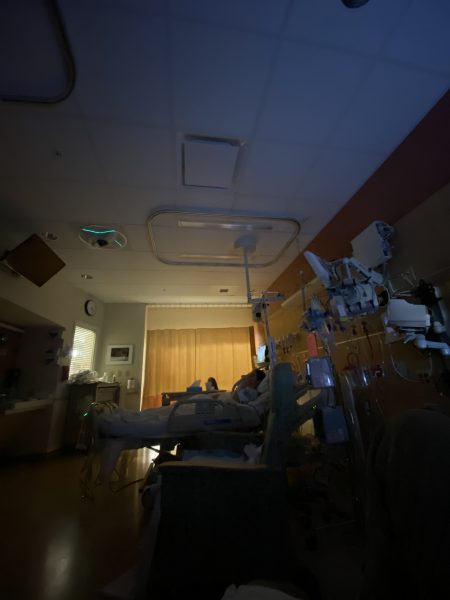 I left Summers CCU room at around 12:30 AM this morning knowing I had to be back for the CT scan at 5 AM.   Also, I had to grab our Prius and move it back to the CARLE house (They don’t allow 2 cars at a time).  After skirting the daytime parking attendants, I settled down around 1 AM and set my alarm for 4:15 AM.  It was as short of sleep as you might expect.  I headed out of the house and headed to Summer’s room at around 4:45.  I had some problems.  All three of the normal doors for entry were closed.  And locked.  I now knew that I was going to have to hustle to get to her room, but I should be OK.

I went into the ER and nobody was there.  An RN was walking through and I asked him how to get the elevators.  He said I would have to talk to the attendant.  I looked over and the attendant was dealing with a panicked woman who sounded as bad as I was on our first day of arrival.  She was in worse shape than me.  Eventually, I was directed down a hallway and the locked door was opened for me.  I moved quickly, but when I arrived at her room… Summer was already gone.

It wasn’t long before she was back.  She told me she didn’t even notice I was gone, because she was half sleeping when they rolled her to the scan.  Glad I rushed!!!!  We both rested for nearly an hour.  Summer started barking orders at me around 6 AM to bring up the window blinds.  Not too high…  Just enough to know it was morning. 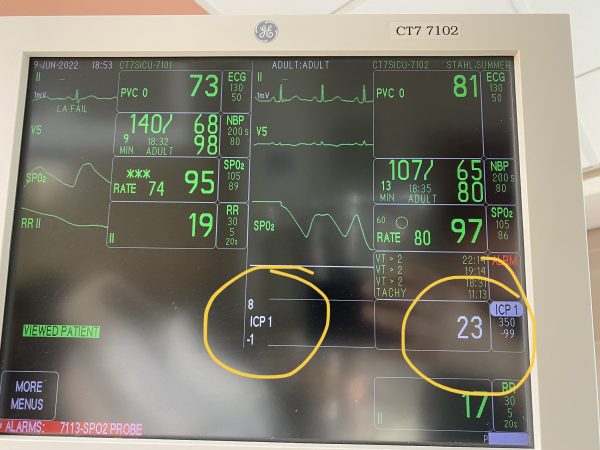 Around 7, Dr. Johnson, I believe he is Dr. Mostafa’s surgery partner, came in and took some looks at Summer and said that the CT Scan earlier was looking good.  He wanted her cranial drain capped off ASAP.  This drain has been relieving building pressure in her head as the brain recovers from the inflammation of the surgery.  We have watched the bags of fluid fill up over the past 8 days.  They started off draining a red color when the initial healing was going on… The fluid is now clear and more healthy-looking.

Dr. Johnson said that a good day of handling the pressure would result in the line being removed tomorrow.  This was exciting but confusing.  We were under the impression from conversations with Mofasta that the clamping of the line would take 2 days to verify before removal.  Regardless… I shared the news online and with the family text group.  Dr. Mostafa stepped in a little bit later and chatted for a minute before saying he would be back after a long surgery.   I completely forgot to ask him about the next day’s hose removal.

The ICP (Internal Cranial Pressure) needs to stay under the control of summer all day…  The goal number is 20 or less.  Really…  For the most part, Summer held the number around 10 to 13 all day.  That was great.

Summer called for a nurse in the morning for a bathroom break.  No BM.

Doctor White showed up on her rounds and started talking about spinach smoothies with chia seeds.  That might show up tomorrow.  She did prescribe a syringe of brown liquid that was supposed to be some kind of super-powered laxative.   No BM yet today. 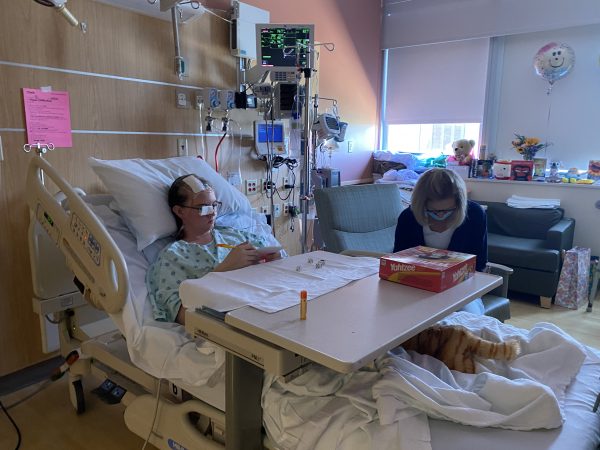 My Mom came by and upon summer’s request… Brought the dice game Yahtzee with her.  We set up for the “quietest” game of Yahtzee ever.  No cup and the dice would be rolled on a pillowcase.  My buddy Mark would have hated it.   We usually make as much noise as possible and shout YAHTZEE!!!!  every time we roll the dice.  I digress.  Summer and mom started playing and I camped out and started sending thank-yous via GoFundMe.

Summer won the first game and things were going great… Until Mom started telling a story about her last visit to Kroger in Pekin.  I can neither confirm nor deny the veracity of this story, but its my Mom… So, I have to trust her… Right?  She started telling us about a visit to Kroger she had and how she would never be back.  Upon leaving Kroger, a rat fell from the ceiling in the foyer area in front of the store.  The rat picked up and ran away.

It’s not terribly funny…  But it was enough that we started having an infectious laugh that went around the room.  Summer’s brain pressure went nuts.  They must have a monitor at the nurse’s station.  Jennifer, one of Summer’s favorite nurses came in to make sure she was not in a seizure.  We apologized and swore, no more joking around.

I was bushed… my 3 hours of sleep had caught up hard.  I requested to leave the ladies alone and take a nap at CARLE House.  She appeared to be in responsible hands.

I woke up a few hours later and headed up to the room.  Nate was back and my Mother had left.  I found out later that the second game of Yahtzee got tough and Summers brain pressure started to get a little high.  Word is, she was losing.  Mom took off before she was banned from dice games in CCU. 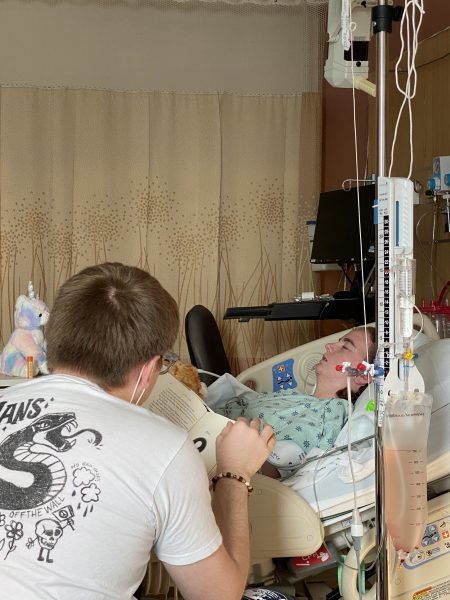 Dr. Mostfaffa stopped back by a little later and he really had a happy tone when looking over Summer’s numbers for the day.  I then asked him if the hose was coming out tomorrow.  He said “No… No No No.   We must wait 48 hours before we do that.”  OK, that makes more sense based on previous conversations.  Angela raced back to work for the first time today and planned on staying tomorrow.  She was ready to come back if they were going to do this procedure on Friday.

Dr. Mostafa is on call this weekend… So,  he will be here to do the procedure if it goes ahead on Saturday or Sunday.  It’s a minor procedure to remove the line.  If the Stunt is installed, it’s a much bigger operation that requires an operation.

Summer called the nurse again for some assistance…  Still no BM

We finished the afternoon with Nate reading a book to her.  Then she ordered the sausage pizza.  It looked awesome!  She ate almost half of it!  She declared “it’s good” about 20 times during its consumption.

We did notice that her ICP jumped up as she was chewing the pizza.  This number ruled our life today!  But it looked great.  (Except for Yahtzee… No more Yahtzee.)

Good day.  Could be better…  But I am not complaining.

I did drop an email to Jean at St. Jude this afternoon asking if there is anything else I need to be doing.  St. Jude did give us a list of materials needed for the onboarding process. More info on that as it rolls out.