I was hoping for a busy day after a slow and pokey weekend.  Monday came and did we ever get it.

Last night, I sent out an email to St. Jude in Memphis to let them know about Summer.  We still were not clear that her age would let her be a candidate for St. Jude’s program, but I used everything in my command to drop names and Summer’s timeline of problems in hopes she could get consideration. 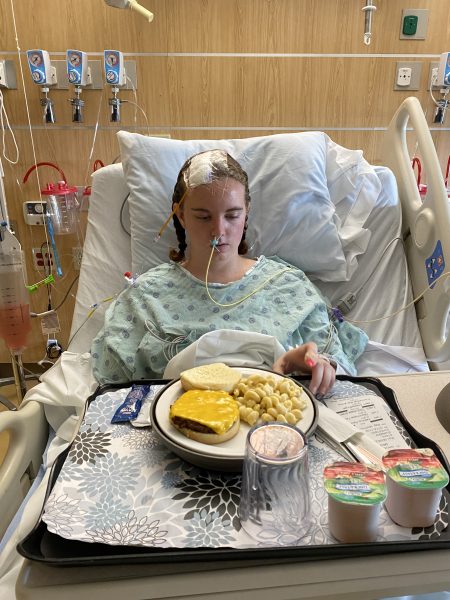 This morning, I was up and just sitting down in CCU to find a few texts from Todd and his wife Darla.  They had contacted St. Jude and the specialists they had worked with over the years to tell them about Summer.  Turns out, St. Jude already knew about her???  My email from the night before had already made the rounds and Summer was being talked about.  We were personally holding off from calling and pleading for help until we saw Dr. Mostafa today… But I never had a chance.

A phone call came in from Memphis at about 9:30AM.  It was Jean from St Jude.  She got to the point.  Their medulloblastoma specialists have reviewed her age and diagnosis.  They want her in Memphis to be in their program.  ASAP.

Blown away.  That’s all I can say.  We had a ton of questions and Jean was ready for EVERY SINGLE ONE.  I gotta tell ya, I have kept my expectations low so that I can deal with disappointment, but the rapid response and professionalism of St. Jude are helping me raise my sights.  By the time the call was over… I was in tears.  My mother was probably right behind me as you could see joy and relief coming over her.  Nothing is for certain, but we are definitely building a deck to win the game.  (That was a gamer reference that a few of you will get!)

Summer was listening in to this call.  I do not know what she has been anticipating.  She has really been out of it, and I wonder if we have not talked enough about what is going to happen in the days, weeks, and months ahead.

I am not sure that has a family,  we have had the time to get a grip on this needed conversation.  I am actually going to make this part of the plan when I get back on Wednesday.  (I came home to I could go to work on Tuesday)

I will say, and it’s my opinion, that she was not too pleased with the Memphis information she overheard on the call from St. Jude.  I am also sure that Angela calling to cancel Summer’s classes for the summer session, trying to work out her lease, and pay her other bills from her bedside started to bring the reality of the situation into focus.

There’s a lot that is NOT appealing for a 20-year-old girl trying to get back to normal, but it is overshadowed by what everyone has said about St. Jude.  Including our neurosurgeon.  He told me that he was not aware of Summer being eligible for St, Jude, but he thinks they may be her best option as they specialize in these kinds of cancers.

I called back Jean and said we are “in”.  CARLE still has to get Summer in a position of health that will let her be transported.  We are likely a week or more away from that.

Today she FINALLY get solid food for the first time since the surgery.  After passing her barium graham cracker test…  Summer was allowed to order off the menu as long as she chewed and chewed the food down.  She ordered a cheeseburger and macaroni and cheese.  You could feel the joy in the air when the lid was removed from the serving platter.  She was looking down dreamy-eyed at the plate for a minute before she even attempted to grab a noodle on her fork.

One, then two noodles down.  Then, Nate assisted, using a fork to break off some meat and cheese from the burger for a taste.  One bite and then a second.  And just like the mac, a second taste was enough.  She was done!

What?  She was stuffed and exhausted with just 4 bites?  We kept the plate around for another hour or two and she never wanted anymore.

Later, our friend Sandra showed up with a Champaign classic, Papa Dell’s deep dish pizza.  I was able to tempt Summer with a tiny bit of cheese and marina on a fork.  She chewed it and in the most tender voice said “it’s good”.  That said, she was full again. 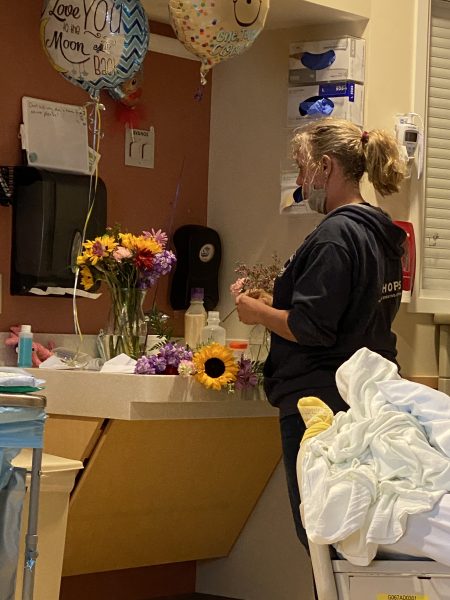 I was very happy that she can eat solids now.  The feeding tube comes out tomorrow if all goes as planned.  (yes, you can eat solid foods with a feeding tube down your nose and throat, but its not pleasant from first-hand reports.

Lastly, the doc told Summer to get out of bed.  Her vitals have been fine.  She is down about half the wires she started with a few days ago…  Its time to take some steps and move.  She took 25 steps today and was able to sit in her chair next to the bed for a few minutes.  I missed this, I was catching up on some phone calls over the late lunch hour.  Ang snapped a picture for me.

Daryl the RN told Summer that tomorrow she would have to walk 50 feet at least.  My daughter moaned at the prospect!  She’s exhausted.

She had a HUGE day…  She’s absolutely 100% entitled to rest.  Tonight anyway.   But tomorrow, we will keep plugging away.

Thanks to George and Andrea for stopping by today.  Pharmacist-humored socks and Cthulhu plushes always bring joy!

Angela got in trouble for condensing flower arrangements in the CCU room sink today.  She has no fear of breaking rules!  I wanted to curl up and hide when she got scolded.  PLEASE DO NOT SEND FLOWERS!!!!  Did you all get that???

Our RN today happened to walk in when we put on the TV.  We found a marathon of Supernatural on TNT and our RN, Daryl instantly started geeking out with Summer on what season it was based on the plot.  Again, like yesterday, when not talking about stuff with Mom and Dad… She perked right up.  It is rather hilarious and is fun to watch from the sidelines how she has a double standard of communication.  Friends and strangers…  Strong face.  Mom, Dad, and boyfriend… Timid and weak.

She did say today that she would be milking the brain tumor excuse for everything possible.  So, please be aware that you are being used if she ever brings it up.