It happened… It finally happened.  After waiting for nearly a whole day in her room, I pulled up the Prius and helped her into the car.  I nearly ran to the driver’s side with a giddy feeling that we were attempting to escape.  I had this feeling that someone might run out and tell us that Summer had to stay another night if we waited!  Even in a Prius…  I was ready to peel out and outrun anyone trying to stop us. 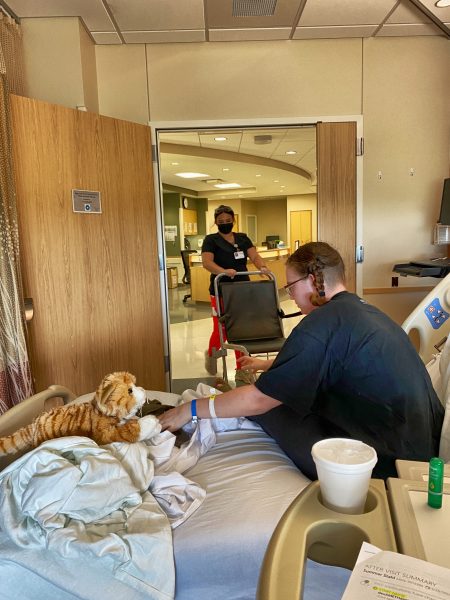 Earlier in the morning, Dr. Mostafa had stopped by to talk about Summers continuing treatment.   Dr. recommended that Summer drive to Memphis and I told him that Summer had already made those plans for us.  We are all on the same page.  I shook both his and Dr. Armstrong’s hands in appreciation for everything they had done for Summer.  Do you hug doctors?  I was in that middle ground where I was ready, but you know…  Men.  We have to be tough.

I ran downstairs to check out of the CARLE house.  Those ladies are sooooooo nice.  We had a sweet conversation about Summer’s condition and heading to Memphis next week.  (more at the end)

It was getting to noon and we were hungry, I went to the cafeteria to get one last amazing hospital sushi and fruit plate.  Summer attempted to use chopsticks and we quickly decided that a fork was OK after brain surgery.  We laughed so hard that the brain monitors would have been freaking out if they were still attached.

Perfect timing, my daughter appeared to be choking on rice and fish while her Dad watching and laughing when Dr. Mostafa’s assistant, Sahara came into the room.  She was here to remove the extra hardware in Summer’s head.

Staples and sutures.  That procedure, while done on her bed, actually took longer than I thought. Bonus, it was bloodier than either of us thought it would be!  I held summers hand tight when the sutures were being removed.

Another hour later, the IV port was removed.

Another hour after that…  Release papers showed up.  It was getting to 2 o’clock!  To pass the time, I closed my eyes to take a nap… and was promptly yelled at by my kid for snoring.  When were we getting out of here?!?!?!  The nurse had asked for “transport” after the IV removal and this was all that was holding us up.

Finally, around 3:00 the assistant showed up with a wheelchair.  We were honestly thinking of doing it ourselves.  Earlier, I had asked the nurse if we had to wait.  She said, “absolutely, you are not allowed to leave by yourself!” 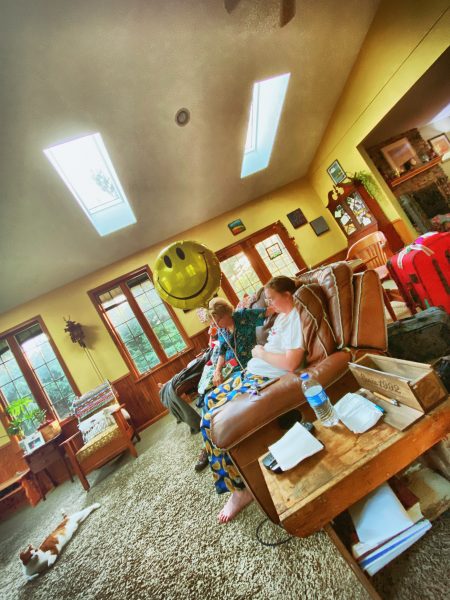 On the way home…  Summer demanded a blizzard.  (Actually, she had been talking about a blizzard for 3 days) We stopped in Bloomington and got 2 small blizzards.  Mom grumbled on the phone, as she was a bit jealous.  But I told her that I was in full “whatever my baby wants” mode.  This will end at some point right?  I could go broke if she keeps working me over!

We did make it home and she DID take a nice long shower.  Her room is almost set up, but it does not really matter…  We are headed out next week.   That gives us 4 days here.

I talked to Jean at St. Jude mid-morning.  She told me that they finally had the pathology and we were to report to St. Jude Memphis on Tuesday morning at 8:15.

Monday, we will pack up the car, and head south.  We do not know squat about our rotation or back-and-forth schedule.  It feels like a giant leap of faith right now…  But it’s what we have to do.

PS.  This will be my last post till we get to St. Jude.  The plan is for rest and relaxation this weekend before we mobilize for Memphis!

Thank you for your support and to everyone who reads this keeping track of Summer’s progress.  We will be calling for those thoughts and prayers in the coming weeks.  Don’t you worry!