Today was predictable.  St. Jude started getting some information from CARLE…  CARLE finally got Summer’s permission to drink regular liquids…  And our Neurosurgeon, Dr. Mostafa stopped by to check on Summer.

I will not beat a dead horse…  It feels like we are moving in slow motion.  A weekend attendant made a comment yesterday that Summer was looking great and she might be released mid-week.  What does that mean to St Jude?  I called Jean today and talked to her briefly early in the AM.  She did say that she had a message from CARLE, she thought it might be the transfer coordinator.  She would call me back.

Angela did not get much from anyone at CARLE  while spending the day there…  Speech therapy said she was clear for drinking and Physical Therapy said she was OK to go home.  They did ask some questions about our house.  We must ensure our shower has a hand wand per their orders.  I didn’t elaborate on Gabe’s handrail… I am sure it will not collapse when used.  (for a while at least!  JK Gabe!)

Why do I care about the handrail?  Well, Summer might be in our house Wednesday afternoon until she is taken by St. Jude.  This all comes down to the information needed by St. Jude to accept her.  The sooner they have it… The sooner we get to Memphis.  In the meantime, she will be sleeping in her own bed, eating our food, and carefully bathing in our shower.  I am honestly paranoid to have my kid who had major brain surgery and has been under constant supervision sleeping in our house.  Do we take turns watching her sleep?  Do we have a reason to be worried about this? 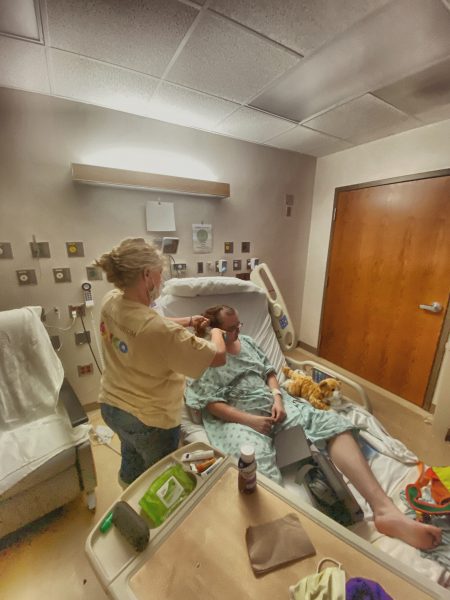 At 4:30 today, Jean called me to say that information was being sent by CARLE and I cannot remember what she said…  It’s either leaving CARLE tomorrow or being received by St. Jude tomorrow.  I’m assuming slides would be overnighted???  I’m still learning these things.  She said she had left a message with Dr. Burnett (The nicest doctor ever) asking about who is responsible for Summers care now.

That’s a great question!  We would like to know as well.

So, that’s where we stand for organizational issues.  But how is Summer?  Well, that’s a much better subject!!!

She is up and taking steps.  She also took stair steps today, about a dozen.  That’s all amazing.  Her face’s still not moving much on the right side.  The lack of smiling is tough.  But her voice and communication are awesome.   It’s also very possible the rest of her stitches where her drain was at will be removed tomorrow or Wednesday.  Angela braided her hair tonight to get a little better look vs a wadded-up beehive.

Summer is soooooo ready for a real soaking shower to wash her hair and get rid of a smell she swears her hair has.

I handed Summer her headphones tonight and the ipad.  First things first… She quickly got the headphones out, put them on and said, “I can’t hear anything…  Awesome”.  Not being able to hear anything else going on was pretty exciting.  She shares a bathroom with someone on the other side of the wall… They say “Ow Ow Ow” a lot.  I feel sorry for them.  Just like the guy in CCU with the cough that was so guttural, I was sure it was the cough of death.  I do think he improved and was moved eventually… But it was 3 or 4 days of deep growling coughs.

Summer downloaded the BOSE app and set the headset up with her phone’s Bluetooth.  I am happy she likes them and I think the noise canceling will be very nice while she is sitting in the hospital.

One final note… I shared it with my family in our text group…  I use Grammarly, it’s an add-on to Google Chrome for spelling errors.  I do this because nobody wants to edit this for free.  You guys are all “takers”!  Seriously though, I use the free version and it works pretty well.  I sometimes get errors, but that’s usually because I have lost internet connection at my house.

One thing it does is send me weekly reports about my writing habits.  Word count, spelling errors, and most common issues.  This week was probably the biggest week I have ever had.  77,000 words.  11000 words a day.  That’s not just from this blog, it’s from emails works screens, etc.  But I can tell you it’s off the charts vs a normal week for me.  I think 25000 is typical 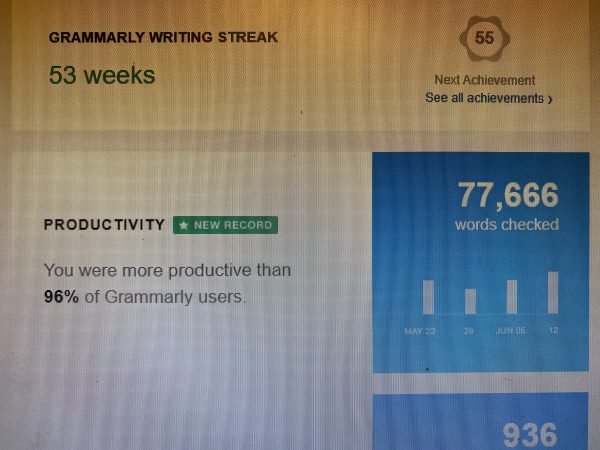