I made a keychain when I was in art class at Westview Elementary sometime in the late 70s.  I think the occasion must have been mothers day.  Mrs Sigmiller had given all of us a small 3″ area to draw/color and design.  That small, masterwork of art would be ensconced into a clear plastic keychain holder to be preserved for decades.  For the front of mine, I drew a little bouquet of flowers and wrote: “To the BM” in block letters.  On the back side, it said “Best Mom”.

This keychain became legendary in our family. 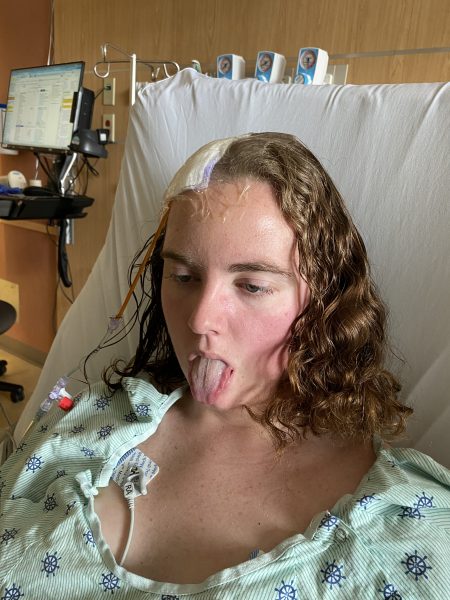 For 40 years I have had to live with the shame of calling my Mom a BM.  Because of this, I have known what BM stands for from an early age.

Honestly, I don’t think I have used or said BM as much in 40 years when I made that keychain until the past 2 days in this room.  Summer needs to poop!  It’s not for lack of trying. It’s not for lack of medicines, formulas, or action from the nurses.  Her stomach is full and she is uncomfortable.  It gonna happen.

Summer did not have any tests today, so she requested that we came in later.  That was fine.  We were scheduled to be out of CARLE house this morning (again) and we used that time to pack.  Once we had the car filled up and ready to go we went to the front desk to give them our keys.  “Did you guys need more time?”  That was the question from the 3 ladies gathered at the registration desk.  Ummmm…. Yeah.  Nothing is changing upstairs in the hospital!

We were then told we could now have the room till Friday.  Yay!

I swear!  CARLE house, as much as we love it… Stresses us out every 3 days!  We are thankful, but I believe our odd hours of coming in and out probably make us poor communicators with the staff.  Ang comes into the hospital at 4:30 AM… I come over later and stay till well after midnight every night.  So, we don’t have a lot of contact with anyone and certainly, don’t stand around chatting at those hours.

I came into Summer’s room this morning to find her eating on a plate of biscuits and gravy.  The nurses had made her more of their specialty coffee “pudding”.  Since she has had some problems swallowing, they put a “thickener” in the fluid to make it very slow-moving.  It’s weird in apple juice… But totally tasty in coffee.  (according to Summer)

These items for breakfast should have inspired a nice BM.  But nope… Nothing.

Later, for lunch, she had a big salad with chicken.  I think should have eaten more of the green stuff… But that’s just me.

She did get up several times and did attempt to make it happen.

Later in the morning, we had a social worker in the room for the first time since we arrived.  I do believe this is a direct result of Angela reading the riot act yesterday.

She was ready with FMLA forms and anything else we needed for Summer, Angela or me.  Pretty great!  Angela’s work, as patient as they have been is still a state agency.  She needs paperwork to make sure everything is in order for her time away.

Jume and Kaylee came over from Pekin and we let Kaylee visit with Summer for a while and gave Jume a tour of the CARLE house.  It was nice catching up, but I wish we would hang out like 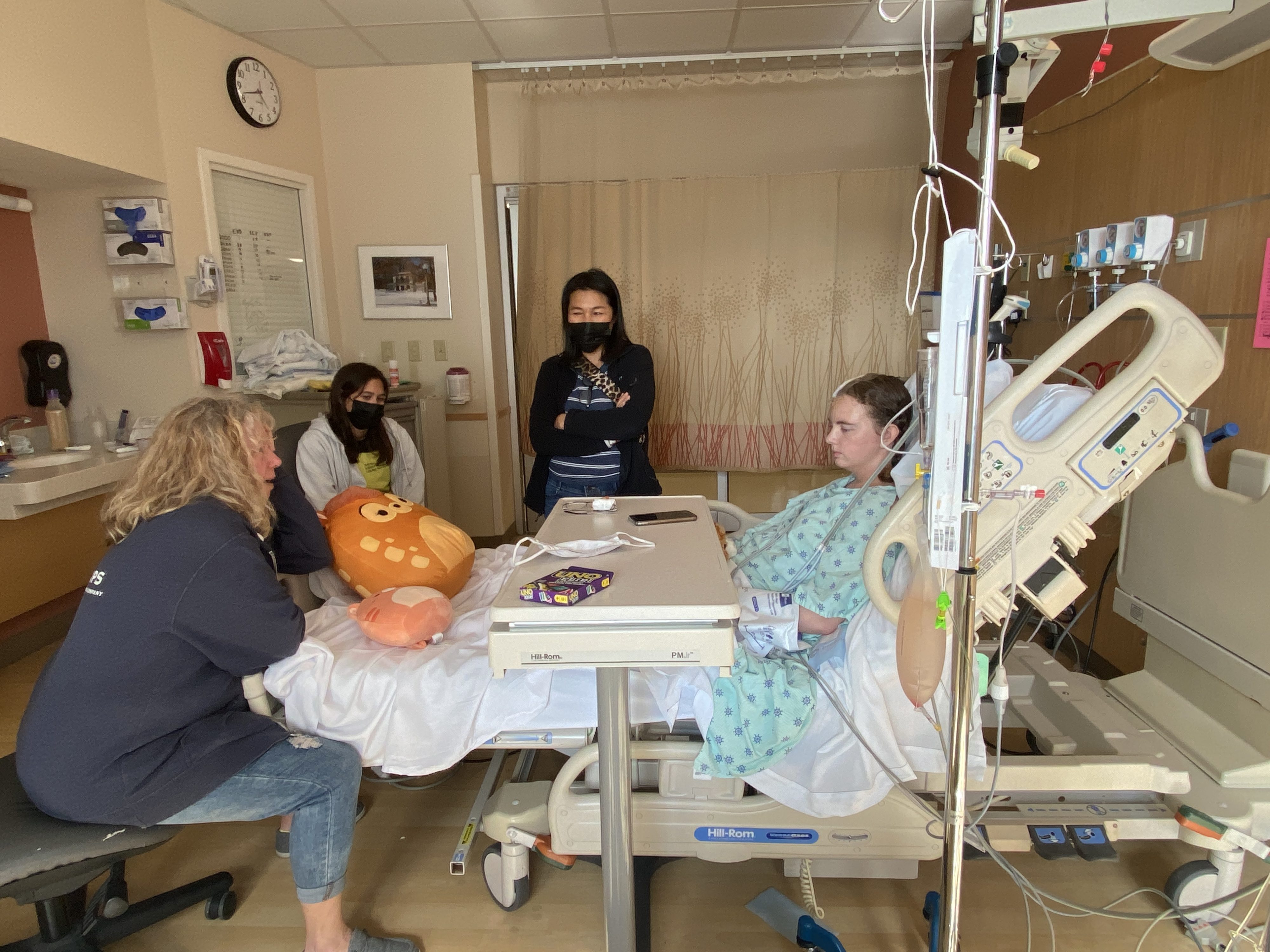 regular people, not at a hospital.  I’ll make an effort for that once we get settled back home.

During their visit, Summer moved to the chair and could see the energy start draining out of her.  It was crazy how faast it fell off.  She was ready for bed by the time they were leaving.

Doctor Mostafa came in with a retinue of residents behind him around noon.  I think it was noon.  Time gets lost in here.  Anyway, he was very excited about the last scan on Summer’s head.  He showed us the scans and said that her tumor removal had actually taken out more material than he anticipated.  He was quite excited (I have never seen this man excited) and wanted to share this with us.

I addressed my fear about the possibility of the permanent stunt and he shot it down.  He said she was doing well.  The fluid was fine and everything indicates she can work with this drain hose for more days as needed.  Do not panic about it.   Awesome.  I can live with this.

He scheduled her for a CT scan at 5 AM tomorrow to check the swelling and how clear the ventricles now are.  I will leave her tonight and get a few hours of sleep.

We have a form from St. Jude with everything they need for the transfer.  Today the CCU physician took our papers and we hope this process starts moving along.

I had left out a bit of the conversation about St. Jude from yesterday’s talk with Dr. Barnett.  I’ll try to make this a short story.  When Angela was told it was a confirmed level 4 medulloblastoma by the physician the other day…  I got on the horn and talked to Todd and ultimately Jean at St. Jude.  We were not off the phone very long when Dr. Mostafa came in to check on Summer.  Angela and I were getting frustrated at that point by the lack of any conversations from oncology or anyone who would give us a roadmap for care.  I told the Dr. that we had contacted St Jude and they want her in Memphis.

He nodded and said, “You contacted St. Jude?”  He is a hard read.  I got the impression that I had stepped on someone’s toes.  It was a lukewarm response in my eyes.  We finished up the talk about Summer’s current condition and as he was leaving I followed him out the door to grab George and Adrea who were waiting down the hall.  Dr.  turned to me and said, “I think St. Jude is the best decision for her and I agree with you taking her there 100%.”

But the fact that he said this in the hall… Again made me feel like we were sharing a secret.  Was I going to piss off CARLE if Summer left?  Am I risking her getting poor quality care from this point forward with the threat of leaving for St. Jude?

I have no idea how any of this works and I became a little paranoid. 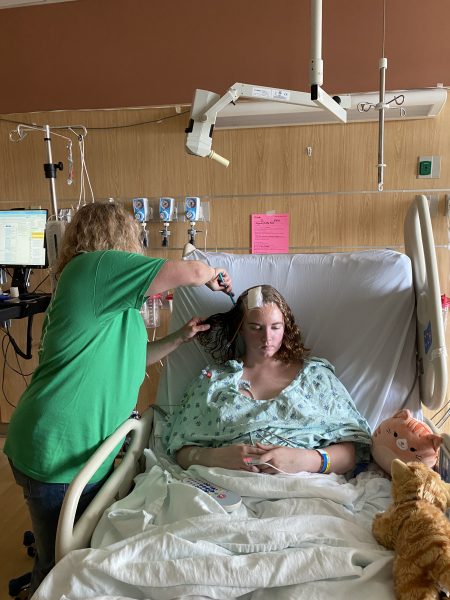 When Dr. Barnett was about an hour into our talk… I raised my hand and asked him a question.  “Are we upsetting our doctors and this hospital by taking our kid somewhere else for treatment”.  Dr. Barnett, as I said in the previous post, is a very skilled communicator.  He said, “A doctor would have to be a complete monster if he kept you from getting the best care for your daughter.”   He said this is not cancer they will treat here and he (like Mostafa) believes that St. Jude is Summer’s best option.   Mayo, Northwestern and Barnes are all great options… But this is a pediatric cancer  St. Jude is equipped and staffed to deal with it.

Hallelujah.  I was truly paranoid after all.

Well, that is going well.  Holy smokes.  I strategically chose a number based on what a week from home has cost us and knowing that a few more weeks are needed.  We know how much Summer owes on her bills.  I also took a shot at what we might be dealing with on deductibles.

But it’s all an unknown.  Angela got home tonight and a bill from SIH was waiting for us.  She didn’t open it and that tells you everything you need to know about the anxiety those envelopes hold.  My friend Amy said not to panic..  Her 165000 bill turned into 3K.  It seems like lately, I have been preparing for the worst… I think that the worst is hiding in some future envelope.

This bit of money WILL be used to help during this time before St. Jude…  Likely during St. Jude to some extent to move people back and forth and then get her ready for school next year.  In the meantime, we will have paid off her Discover card and some of her student loans.

Can it go that far?  I have no idea.  Will it help?  Absolutely.

I could change the amount on the request on their page, and might if we get some serious BS from the insurance company.  Otherwise, I will just leave it at 10K and will still accept any help anyone is willing to give.  The rest of her life has changed and we will be dealing with follow-ups and visits for years and decades to come.

Thank you to everyone who donated and shared.

The address again in case are new here.  https://www.gofundme.com/manage/brain-tumor-fund-for-summer-stahl

Oh, also.  Some people don’t want to use GoFundMe… Or PayPal… Or Venmo.

I get it and appreciate that.  Those services all have fees and percentages removed from the donation.

If you want to mail something:

Paypal and Venmo for me is @planetstahl

I will move that money to the bank from those services.

That’s enough tonight.  I’ll roll into bed around 1 AM… Set the alarm for 4:30… And head back over.  Thanks again for everything.  Your thoughts, prayers, and donations mean a lot.  We have great people in our lives!