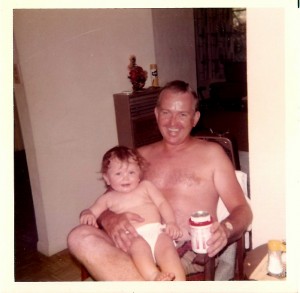 This is going to be all over the place.  As a matter of fact… I think this post is going to be a general “Work in Progress” for days/weeks to come.  If you come back another day and it read differently.  Dont be shocked.  If you think its long and wordy…  Its really just for me, and for me to remember him when I become old and forgetful!

My Grandfather, Weldon “Pete” Stahl passed away this weekend.  He had suffered a severe stroke a few weeks ago and toughed it out before he could do no more.   The guy was hardy, took no medication, had low blood pressure and was generally an ironman in my book.  I did hold out hope in the first few days after the stroke that me might find his way back.  It was not to be.

I loved my Grandfather to pieces and spent a good portion of my life looking up to him as a role model.  Pete saying he was proud of me or really happy for me, made me feel as if I had pleased God himself.

I think this comes from my perspective that he was my direct link to my father.  This is going to get long winded… But hear me out.  When my Father died…  Pete was the torch bearer for keeping my Dad’s spirit alive.  I am not faulting anyone for not being that person besides him.  Especially as I get older, I can see how you have to move ahead in life.  The death of Don Stahl could not hold my Mother hostage for the rest of her life.  I could not expect that his Brothers and Sisters would shut down their lives to fill his place.  My Mother did the admiral job of keeping his presence there for my brother and I.  Tim, my eventual step-father…  What a mess he walked into!  How could you hope to compete with a man that your step-kids consider as a saint?

Pete.  He would talk about my Dad.  He would field my questions about him.  He had stories and would smile and laugh as he told them to me, especially when talking about music and concerts with Dad.  Once, when he was working on the “green house” roof on Hickory St., (We have to call them by color since my parents moved to multiple houses on the same street as I grew up.) I was talking to him as he worked on the roof.  I asked him “Do you still think about my Dad?”  He was working… But he paused from what he was doing and turned to me… He said “Not a day passes that I don’t think about your Father.”

BAM!  That was my security moment.  Pete would be the eternal flame that I could always trust to have my Dad’s spirit alive.  He was my bedrock that I could move up from.  He was my chain-link to dad.  Everybody else in my world could move forward with life, but I knew that I would always have Grandpa Pete as my direct connection to Dad.

As a kid I loved spending days at the Elm St. house mowing the yard and sitting on the front porch.  I looked forward the conversations we would have.  Its funny, he never asked me to do any work for him around the house.  I did some odd jobs for Grandma.  But Grandpa was always completely self sufficient.  He never worked with partners.  Very rarely asked for help.

When given the choice whether to stay at Rathbun’s or Stahl’s when Mom and Day left town… I always chose Stahl’s.  Not sure why.  I did feel a closeness and an ease when at the Elm St. house that I did not get anywhere else.

As I got older and he would ask me questions about cars and my job… I could tell he was very interested.  He always made sure to make me acknowledge how fortunate I was.  Good work with a steady company was a reward in his book.  I must be doing well for whoever I worked for if they kept me this long!  I know he lived by this.  He never said the word retire.  EVER.  He would work as long as anyone would have him.  Ultimately, I think work was his value system.  I might be making it too complicated for someone who didnt know him, I apologize for this and will come back to this another time.  I think its the key to everything “Pete”.

Pete had a great laugh, an awesome sense of humor and an aura of lightheartedness.  He wanted to laugh and have a good time when we got together.  When you see pictures of my family  and it looks like we are always having fun… Its because we are!  It starts at the top and everyone else carries it with them.

He never came out and said it, but he told me stories that alluded to his father being a pretty tough guy to please.  Most recently about his Dad beating the stuffing out of him  for something he didn’t do.  Grandpa Pete outlived his siblings and 2 of his kids.  He lived through the horror of losing a child too young.    But even with all of that… He would always be ready with a giant smile.

That smile, his eagerness to laugh and his rock steady handshake at 80 years old are all things I am missing.

I have no idea what lies beyond.  In my kid-like dreams and thoughts over the weekend, I imagined him re-uniting with Don and being a very very happy spirit.  I like to think its that simple.

Favorite Memories as of this second:

Driving him to O’hare when I was 17 in the Astro Van…  We did a 100 several times on US47 on our way up to Chicago.  He was grinning from ear to ear.  I think he was 2 hours earlier than he needed to be there.  He just laughed when I dropped him off at the terminal.

MadHatter  1984:  When we had the whole musical portion of the night…  He got on the piano and stared banging out some boogie woogie that blew my mind.  I always wanted to hear him do that again…  But I never had the chance.  Years later when I asked him if he could still play, he said his hands couldn’t pull it off anymore.  He certainly didn’t practice?  Was he a natural talent?

When he did talk about work…  It was with love.  “If your going to do something, do it right” was one of his famous quotes.  He lived by that one.  He built some clothesline posts for Angela’s when we moved into our first house in Delavan.  The wood, the primer, the paint and all the fittings were the best.  I do believe that the house is falling in over in Delavan, but those clotheline poles are still looking sharp!

Living in Pensacola when Dad was in the Navy…  I remember the pool in his backyard.   He loved that marlin fountain and it became a trademark to his pools as we grew up!

When we bought the Christmas Tree Rd house… He came over as my inspector.  He looked at the roof, rafters, floor joists, subfloors and everything else to declare that the house was a testament to solid workmanship of circa 1910.  He had no concerns.  That was enough for me!  We bought it and it was solid as a rock.

Eating Charles Chips from the can with him.

Watching him blow off calls that he had too much White Zin for the night.  He would always find another glass.

Spraying myself with aftershave in his bathroom when I was 10…   Going back out to the couch to watch TV and having him say “What the Hell did you do?”  As an adult now, that has to be a hilarious moment when a kid does that!

Riding down the Florida in the back of the Cadillac listening to what can only be described as MUZAC today!

Riding around Fairbury in the back of the giant early 70’s Fleetwood.  Whenever we would pull up to Walton’s or anywhere else…  It felt like you were exiting a presidential motorcade vehicle.

Pete-isms.  “We’ll I’ll see ya” and the many other that I’m drawing a blank on right now.  It was a personal highlight for me when he got so happy and rolling with the conversation that his little “isms” started rolling out.