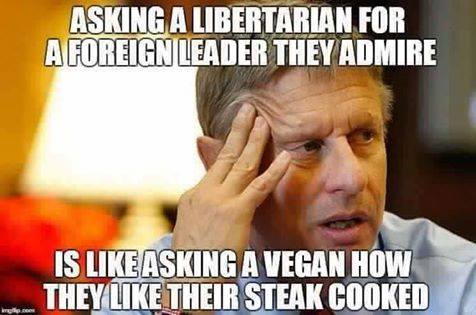 I am not giving Gary a pass on this… When I heard it, I was like “C’mon guys!.. Your killing me out here”.
When I watched the exchange with Chris Matthews (Who gets generally less likable with time) it was totally cringe-worthy.
I wish I would have heard the more of the forum… I do wonder what the heck Matthews was looking for in the question. The only foreign leaders that we know of right now are enemies as far as I can tell. Even the resurected Sarkozy is considered a bad guy to most. Berlesconi? Ha… Dont think so. Who’s running England right now? I have no idea since Cammeron left.  Merkl? Most Germans are ready to ship her out since she has allowed a massive amount of Syrians in. Japan? No idea. Canada… Ugh… Its on the tip of my tongue!
Lets be real here… The policy makers and important people of the world right now are business leaders. We all know Warren Buffett, Bill Gates, George Soros, Richard Branson, Elon Musk, Jack Ma and a few kings in the Middle East. Governments just ache to serve to the afformentioned desires. I think the only guy I admire as a politician in this entire world is the leader of the Philippines… Dont know his name without stopping to google it… But he basically told the UN and the US to get the hell away from him if they are not going to help him stop the drug problem in his country. Good for him. Someone with a conviction that is trying to make his country a better place when he is done. (Yeah, he’s using capital punishment and storming through front doors… And arming the locals… Separate conversations)
I said this to someone else a few minutes ago… Gary Johnson is my horse for this race. There is No conversation that will sway me to the big business and big war loving Clinton party. Trump will not get my vote either. Johnson is not owned. He has a few policies and stances that totally bother me (example: Pro Fracking). Johnson may be naive and a bit of a ideologue in the Libertarian beliefs, but Bill Weld is a competent co-leader who makes me believe that they can handle anything.
I have heard a few folks say “I wish Weld was the top of the ticket”. It would not have happened. Johnson chose Weld. Weld would have never made it through the Libertarian Convention. Most of the “True” Libertarians believe he is too “Republican” to represent their party.
Also remember… Johnson and Weld were denied security briefings that Clinton and Trump have access to. They get their world news the same way you do. On top of that, they have to spend their time circumnavigating traditional media to get attention. A few cable shows that only hit a million people (That are probably educated voters anyway) will not make the difference for the Johnson/Weld 2016 push.
I see two guys trying to offer a better option… For better or worse, I do believe the cycle of the two party system has to be broken or stonewalled before we can get real change in campaign finance, school funding and nation building. These guys may or may not do it… But they will send a message.
#letgarydebate
Tweet