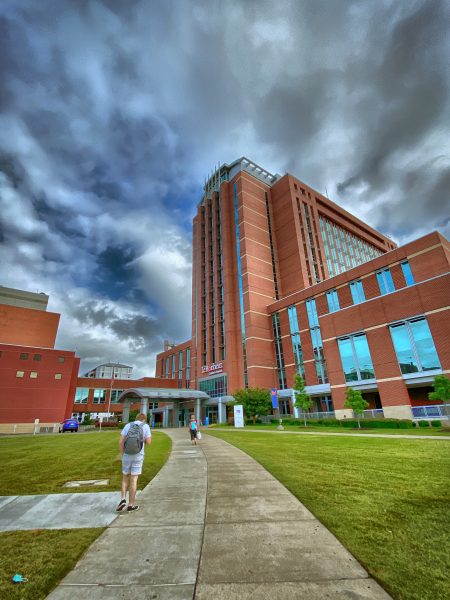 Summer had her surgery on Thursday… It was a long surgery that had her under anesthesia for nearly half the day.  When it was all over she got a great report from Dr. Klimo.  At that time, he said, “I think you will be out of here to see fireworks”.

I thought the dude was crazy.  When we had a similar surgery in Champaign last month, Summer was down for 3 weeks.  Really down.  She was nearly unconscious for 3 days.  Ask her anything that happened, she doesn’t remember a thing.  To have a re-do surgery taking out more tumor material filled me with a dread of many more weeks of needed recovery.

After physical therapy signed off and the IV port was removed…  We were free to go.

Sunday afternoon she walked out of LeBoneur (with some support from Nate and Angela) and came back to Target House.

We came back to Our 5th floor apartment and it kinda felt like home.  In a weird neutral upside-down world kind of way.  I asked Summer what she wanted to do.  She said ” a nap would be great”. We let her lay down for 90 minutes or so.  It was an opportunity for everyone to take a breath actually.  I fell asleep in the chair.  Ang read a book and Nate was browsing the net (or reading magic cards or sleeping.  I don’t really know since I zonked out!). 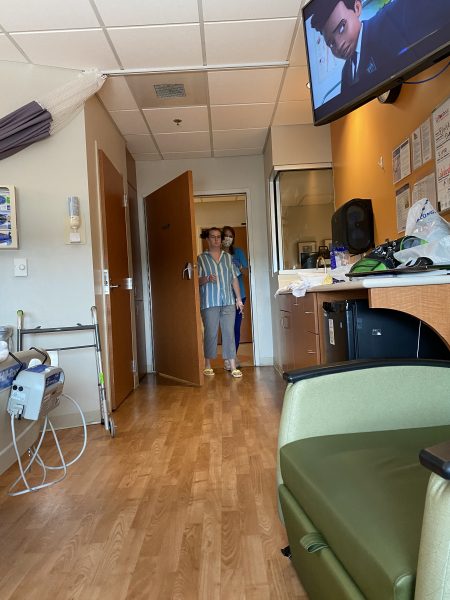 At about 6 PM we decided to go get Tacos.  Tacongana is amazing and we thought that taking Nate there might be a great dinner.  We pulled up to a PACKED food truck and seating area.  I think Summer is pretty mobile and doing great. But this big crowd was not a great place to deal with on her first expedition out of the house.  I did a quick check of my “Things to Do in Memphis” google map.  (Summer and I have a shared map of taco trucks, books, and record stores in Memphis. Oh, and Mounds!)   Taqueria Palenke Express was the new destination.

Taqueria is a food truck located on the corner of Poplar & Highland.  It appears to be a bit of a troubled neighborhood.  It was daylight, and it was busy… Don’t worry Grammy!  We ordered a little light for 4 people, but we were not sure what to expect.  All told, with drinks and lots of tacos and a burrito…  28 bucks.  Not bad.  Plus, the tacos came with spicy carrots and radishes.  Yes!  I have not had those carrots since I was in San Diego with Don years ago.  Different experience than Tacongana, but I think has a better chance of being our regular stop.  Quick, cheap, and delicious.  Plus, the lady taking the orders was much friendlier. 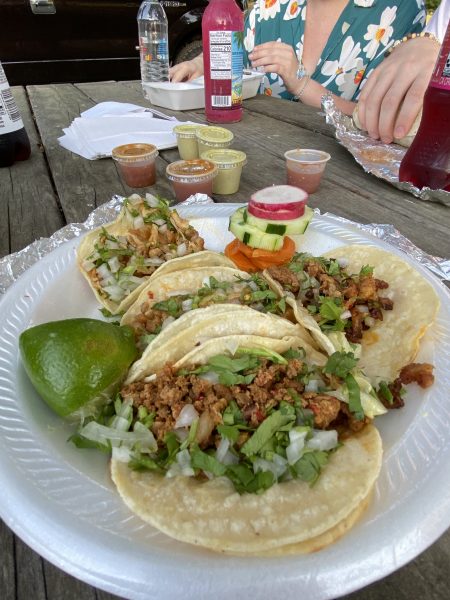 We drove over to the Brooks Art Museum park and sat at a picnic table to eat.  The sun was going down and the temps were bearable for everyone.  Nate is a softy!!!  Too much AC for that guy apparently!!!

It was still way too early for fireworks so we came back to Target.  We played a quick dice game… Nate won.  We didn’t have enough time for a rematch because 9 PM was creeping up.

We ran down to the Children’s Museum / Ball Field for the Memphis public fireworks.  There was a massive parking lot you could pull into but I know what that looks like when trying to leave after the show.  Summer said the same thing and that was enough for me.  We went around the far corner of the ball field and parked the car along a roadside.  There were a few cars there when we parked… But it picked up considerably as the show progressed.  Angela and I got out of the car to watch.  Summer and Nate sat inside with the windows down.

When it was over, I jumped in and did a u-turn in the middle of the road.  We were back at Target House in 7 minutes!  You can’t beat that!!!

Dr. Klimo did it.  We made the fireworks.  A small victory but important nonetheless.

Tuesday, we are back at it…  MRI and more checkups.