Angela and Summer made a break for it Thursday night after Summers’s last Proton treatment.  The radiation crew at St. Jude are fantastic…  They loaded Summer up with celebratory balloons after her last treatment.  Regardless, Angle and Summer did not waste a moment with a party, I think they were on the road home within minutes! 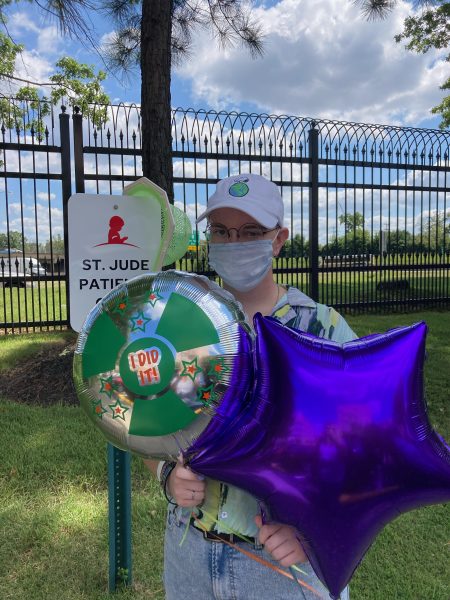 Angela had said before that she did not want to drive after dark when we talked about this situation earlier in the week…  But I don’t think there was much desire to spend another night when told they were free to leave.  Angela and Summer had packed the van earlier in the day and had this preplanned in anticipation of the release.

Once they were home… I emptied a few items out of the Fort’s Sienna but I was in awe of the fact that both my Wife and Daughter went straight to bed with no chit-chat for me.  They must have been tired!

Friday, went to work for a bit, but Angela and Summer were asking if I would go to the Lincoln home in Springfield with them.  There is a Jr. Ranger badge from the national park system that neither of them has.  This has been driving both of them nuts for years.  Since Summer is home, we are going to make the best use of her free time.  This is one instance.  Springfield was nice.  we had lunch, walked around the Lincoln home national park area, and took a tour of the Lincoln home.  It’s VERY nice the way they have blocked off a couple of blocks and restored the area to a portal into the 1850’s .  Afterward… We drove past the Dana Thomas House.  Its a Frank Lloyd Wright home in Springfield that is open for tours.  It was late in the day… But we will probably try and get back down there soon.  We also stopped by Dumb Records downtown and would highly recommend any of you guys or gals into indi record shops drop in and check it out as well.

Saturday was the start of the Marigold Festival in Pekin.  This is the first year in a decade that I have not been there with my scouts from Troop 62.  I feel like a slacker!  But, I told everyone that I was going to prioritize Summer’s visit home before committing to any plans.  Ideally, we are back to normal next year.

Instead of Marigold.  We finally got Summer and Aiden in the same space at the same time.  We drove to Wisconsin to check in on our son who has been gone a whole 7 days.  It felt longer if truth be told.  We picked Aiden up and had a day checking out the waterfront in Racine, having lunch at the marina, and investigating some small businesses that specialize in records, books, and games.  We found a great place on our last stop…  Marblehead’s in Kenosha had not made my radar on my last visit…  Shame on me.  Cool place.

This low-key day may sound kind of lame.  But in reality…  It was tons of time for Summer and Aiden to hang in the backseats of the van and talk like siblings again.  Lots of chatter and “slams” spread all around.  At one point, Angela and I went into the college to use the bathroom… because we are old…  and left them alone for 3o minutes.  We wandered the student union and were in no hurry while they were sitting together.

It sounds like Aiden and his roommate are doing fine.  I am glad about that.  We offered about a million things for his dorm room while we were there…  Ultimately, he splurged and picked up an 8-pack of lemon-lime Gatorade for his fridge.  Really?  Your parents offer you anything and that’s all you get?  I am keeping an eye on him.  Eating better?  Or just eating dorm food?  We shall see in a few months!

Tonight we came home.  Summer is going to church with her Grandma Linda tomorrow.  I will be winging it from there.

Thursday night before Angela got home… I got a message from Chef Josh.  (He’s been a longtime friend since we first met years ago at Harvest Cafe).  His message was short but nearly knocked me to the ground.  He told me that Kevin Myszkowski had passed away from suicide.  I leaned on the door frame of the car and fought a lot of emotions.  I will save those for another post.  I have been messaging other friends and his wife Jennifer about all of this.  I am so sad and angry.  Again…  I will try to illuminate more on that.   A memorial is being held this coming Saturday in Bartonville.