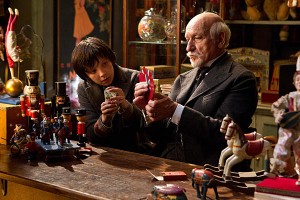 Watched Hugo tonight with the kids… And as kids movies go…  Its OK.  I was surprised they didn’t want to get up and leave the room for the final 30 minutes.

But, as an adult in the room… It really just leaves you feeling like crap.  For me anyway!

When I watched Ben Kingsley talk about making art and saw the noble push he made in his life to “create”, it really reminded me of my dreams as a kid/young adult.

I wanted to create!   But life took me on another path and out of that game!

While I do consider the podcasts, created images for the show and blog posts to be content… They are far removed from the guy who dreamed of drawing comics, writing a decent short story, or working with others on film projects etc.

Art is hard work!  I have said before that working 40 hours on a podcast a week would probably generate the same results as a full time job.  Effort in is directly related to the outcome.

But, here is what happens…  You do your 8 to 5 grind…  You do stuff with the kids activities 3 or 4 days a week… And then you work around the house on the weekends.  Doesn’t leave much time or energy to “get creative”.  I admire people who can do it all.

So, I’ve said myself… “I will get to it later”.  Well, I have seen firsthand that waiting till later is not a good plan.  I see customers all the time that have health problems and die a few years after retirement.  (That’s why I’m not waiting to see the world until after I retire!  Screw that!  Nothing is guaranteed in this life!)  Retirement is not a plan… Its when you are put out to pasture!

Creatively, the podcast is just a screw around for Dan and I.  In the past I have gotten really “in” to it creatively and come up with ideas and scripts.  We used to do video reviews that required a higher level of production.  Those have been brushed to the wayside in recent years.  I think that the beer aspect of the whole show is the part I could care less about.  Its more about hanging with Dan and doing abstract brainstorming with him about society and culture in general.  I think that I fell off the creative wagon a when it felt like I “had to get a show out” for a long span.

The “show” is an outlet…  And its a good one!  We have some traction and its a totally blank slate that can be manipulated to whatever I want!

FIRST…  I HAVE TO GET THROUGH THE ST. JOSEPH SCHOOL GOLF OUTING!!!  I know that flies in the face of what I said above.  But, after working with the other volunteers and parents on this project.  I have become totally re-born on my conviction of this project for the school.  Lots of people are depending on that project and it means the world to me that we do something good.  Thas a subject for another post!