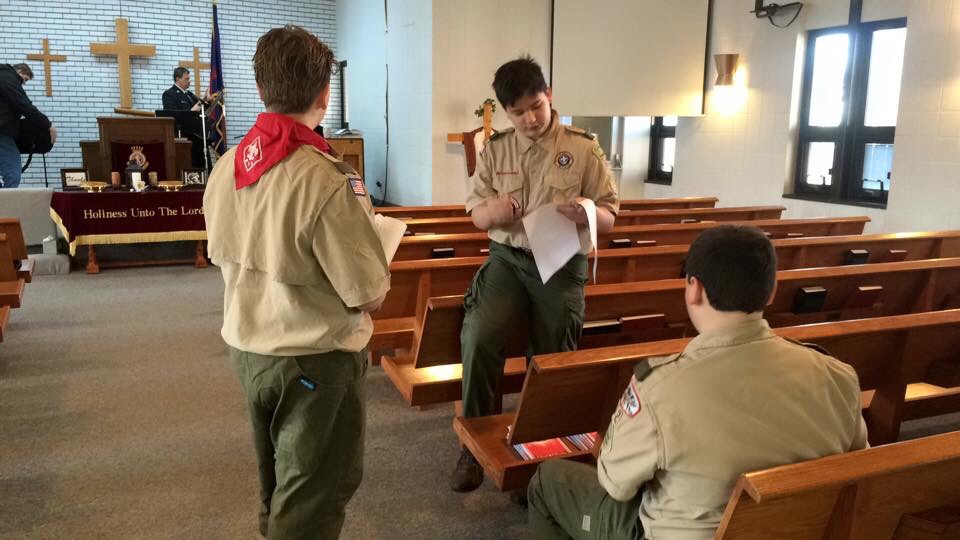 This past Sunday Aiden and the rest of Boy Scout Troop 62 joined together and celebrated a Sunday Service with the Pekin Salvation Army.  One of the scouts was finishing his “communication” badge and needed the help of other scouts to do a presentation.  We had a good mix of older and younger scouts show up to pitch in and help.

Aidens contribution was participating in a skit that was to be performed during the service.  We got there early and he read the script with some of the other kids.  Now, I have seen my fair share of Cub Scout skits over the years, and was pretty much prepared for a chaotic show that normally is produced by these last second practices.  This was my first time seeing a scout one though, as Aiden is still in his rookie year.

The older boys started the “play” and it was rolling along for a few minutes before my kids turn.  As he started to read his part, I was filled with a great pride…  He was reading with confidence and never hesitated on any of the lines.  When it was almost over, there was a brief confusion with another actor and he became red faced and embarrassed.   Even with that, he still was steady on his lines to the end.

I guess I only make this commentary because I was so impressed and proud of the job he did.  This kid would make you think reading was the devil one year ago…  He has now flipped some kind of 180.  It’s an amazing turnaround!   I will take little credit for this.  I have to imagine years of participating in services at St Joes in front of much bigger audiences made this feel easy.

When it was over…  We were driving home and I was talking about the style of the service.  I said “that was kind of like a Baptist service with all the singing”.  “Nuh uh…  Baptists have communion on the first Sunday of the month”…  Came that indignant know-it-all voice that I have grown so used to.  Ok Stig, you definately know your church services better than I do!

Speaking of personal growth.  It’s also worth noting that in some of the recent St Joes basketball games Aiden has been seen dribbling, passing and rebounding.  The shots are still a little rough…  But it’s growth!

6th grade should go down as a big year.  I am starting to see glimmers that my little kid is growing up.