We did get out of Memphis on Friday…  But it was a painful process! 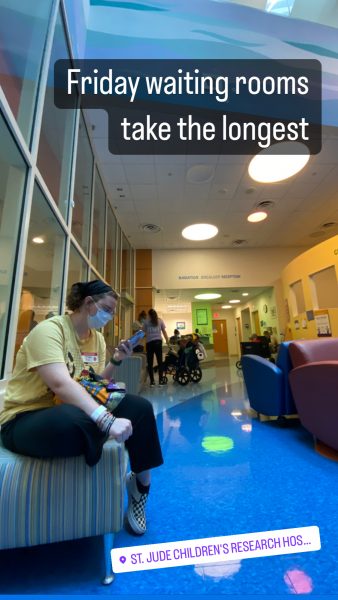 Summer had minimal appointments on Friday and that should have worked in our favor to get her home for Nate’s birthday weekend.  Chemo in the morning, pharmacy visit, medical supplies visit, and then lunch.  After that, radiation and a follow-up appointment with Dr. Tinkle our radiation specialist.  It seemed easy.  I didn’t even take my backpack, because I thought we would come back for lunch at the apartment and then blow out from St Jude to Decatur.

What really happened?  We got held up late in Chemo.  That was not a big deal, but by the time we got done with our other tasks… We made the command decision to storm radiation right after 1 PM (90 minutes early) to see if we could jump a spot in line.  There are 3 proton machines and they do move pretty fast.

The early arrival actually worked out.  I was not happy I did not have my computer…  It left me to sit and watch GhostBusters in the radiation waiting room (All female cast version) It was fine until they let the DVD menu run over,  and over , and over, and over again when the film was done… I had Ray Parker Jr. stuck in my head.  Ironic, since we had heard that song at lunch, and Summer thought enough to comment about it then.  While I was clutching my ears in the tiny waiting room, Proton techs got Summer in and rolling early for her radiation treatment.  Awesome…  This was not perfect, but we were getting through the day.

Last but not least was a visit to Dr. Tinkle.  He is a super nice guy… So I don’t want this to sound like I am firing on him!  BUT!  We got stuck way too long waiting for the Doctor.  His assistant came in and asked all the routine questions… Then pushed, pulled, and tugged at Summer’s appendages to make sure she had muscle control.  She checked out all fine.  We then sat for a while waiting to see the big doc.  When Dr Tinkle came in, we were nearly clawing at the door to leave.  I know when he said “How are we doing today?” that I responded with something like “We’ll be a lot better when we are leaving”.  That was soooo rude on my part… But he took it in stride.  We told him we were trying to get out of here and this was our last appointment.  He was cool and there was not a lot to say since Summer was feeling pretty well.  (Her recent stomach pains were from “plumbing problems” brought on by the fertility treatment)

That’s a brutal time to leave, especially since I agreed to take Summer to Decatur and drop her off at Nates.  Then I would head back to Tremont. 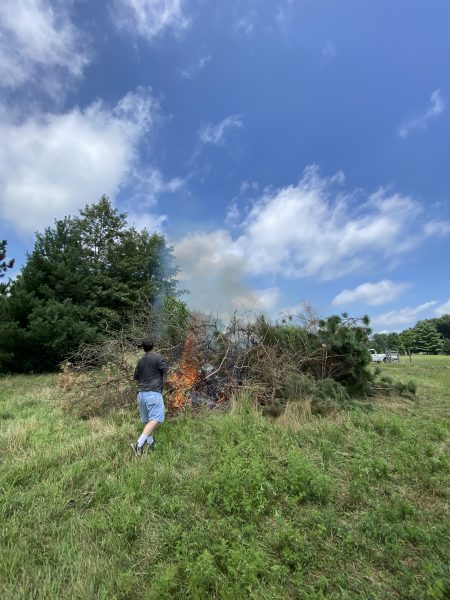 Things were going fine until another one of those 30-minute pit stops.  (Sounds just like our last trip?  I better get used to this?).  This time the extra long break was in Litchfield IL.  I stopped so Summer could go to the bathroom and while I was at it, filled up the tank on the Prius, but I probably could have made it home.  But, I also know that having little gas outside of Mackinaw is not always smart either.  Since she is a picky eater now, I asked her where she wanted to go.  Taco Bell was agreed on… And thankfully, she ate her burrito and 2 Cinnabon thingies.  Very cool.  What wasn’t cool was the Taco Bell clerk running off with my credit card and then not giving me a receipt.  Not only did I miss my valuable Taco Bell points… I am now worried that she is buying items online with my card.  I need to check that when I am done here.

Summer got to Nate’s at 9:50ish and hopped out of the car with her overnight bag… And then asked why I was still there.  (Its good to know that no matter how much you coddle her or no matter how bad she feels, those normal 20-something daughter daggers can still be hurled at Dad (or Mom)! I got the hint and got out)

I got home at 11:30.  The next day in the obnoxious central Illinois humidity, I edged and weed-eated the house and backyard.   My friend Mark then came over, because he likes to chainsaw things.  We then knocked down 4 pine trees and heaped them up in the burn pile.  We were tossing tree branches in the pile when Mark’s glasses snagged a limb and got flung into the heap of dead branches.  This is a massive heap, we were literally looking for a needle in a haystack.  I tried to look…  But every time I pulled a branch and tried to look, I was feeling it and could not take another minute outside.  I convinced Mark to let me go inside and grab a drink before I passed out looking through these branches.  We headed back out after the break, this time with Aiden, and within 10 seconds Aiden found the glasses.  1 foot from where I was earlier.  At least it was a happy ending.

Later on Saturday, we drove back to Decatur for Nate’s 21st party.  It was a great time and I met all these folks that have been supporting Summer from his side of the family.  Lots of blog readers! 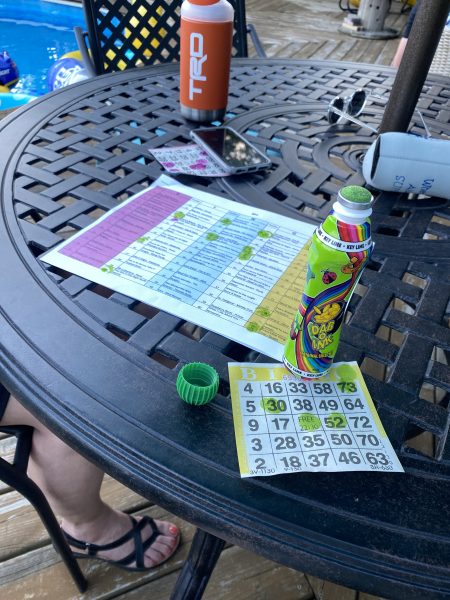 I love it!  Nate’s Dad had a DJ setup on the back porch that eclipses anything I have ever done for my kids on their birthdays.  (Thanks for that Chris).  He had an awesome bingo game (Yes, I said awesome bingo) that is based on songs from different decades.  You are given a list of 75 songs and a bingo card.  Chris and Jennifer then play snippets from each song randomly until someone gets a bingo.

My card was not bad…  I filled it out and waited for one last song so that I could yell “Bingo!”  I ended up not getting the Bingo as I sat for 7 turns waiting for one flipping song…  Ray Parker Jr, Ghostbusters.

We had a great time.  Summer and I dawdled around the house this morning and I did a few more chores and talked politics with some friends…  We got here in Memphis around 9:30.  That was a lot of seat-time from Friday to Sunday… I don’t really want to do that again anytime soon!

Tomorrow is a short day with 2 appointments.  Bonus, we are meeting with Reed Fry and his Mom.  Reed is a St. Jude patient from Mackinaw and they are here for a checkup.