I have spent a few days now out on the local streets in Washington, Illinois placing “door hangers”.  When we started this campaign, I 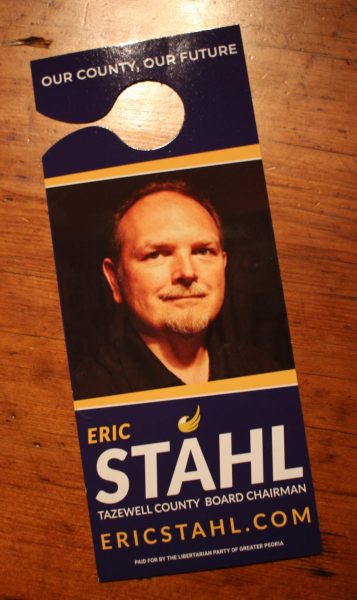 was told that the Libertarian Party of Greater Peoria would be supplying these guys for the campaign.  All I had to do was come up with some verbiage about me or my candidacy for County Board Chair.

As a first time candidate who was working under time constraints…  I rushed to fill the white space.

Now, as I am placing them on doors around Tazewell County, I am not totally happy with what I came up with.  The wording and key points on the hangers deserved more attention when we were making them.  Next time I jump into this…  I’ll be a little more clear!

Lets dissect those bullet points as I wrote them…

Fight for your individual rights:

We joke and use this phrase a lot when talking about Libertarian ideals.  Its the short form of the platform?

I don’t use weed… I am in a conventional marriage and have been for 25 years.  Our family gun ownership is not nearly as zealous as some.

That said, I will fight for your ability to have personal freedoms unimpeded.  Government is best served when its worried about roads, bridges, education and general infrastructure.  Dictating and ruling what’s going on in your house or on your property is not their job.   I am leaving you alone and expect everyone else to do the same. (Unless you are not following the non-aggression principle)

“Being all equal and independent, no one ought to harm another in his life, health, liberty, or possessions. “John Locke 1689

He will protect the 2nd amendment.

I have said this before…  The 2nd Amendment was not written to protect your right to hunt.  It had purpose offering citizens protection against foreign powers, each other and to maintain a “free state”.

“A well regulated Militia, being necessary to the security of a free State, the right of the people to keep and bear Arms, shall not be infringed.”

I see no reason that we should infringe on the rights of gunowners and I feel that Illinois’ Fire Owners Identification (FOID) process is burdensome enough to owners and retailers in our state.  For the life of me, I am not sure why we make it so hard for legal gun ownership… Especially as illegal gun crimes rage all over.  The state should take those legal fees that they collect and use them to collect the illegal guns.

As for the government crashing through your door and taking your guns and civil liberties… I would argue that the government has already taken away a lot of your rights.   Through the back door with taxation.  (They will do the same with electric and autonomouse vehicles … watch)  This article about where your FOID fees go illustrates that everything the state does is an effort to take in revenue.  They will not be getting rid of FOID anytime soon. 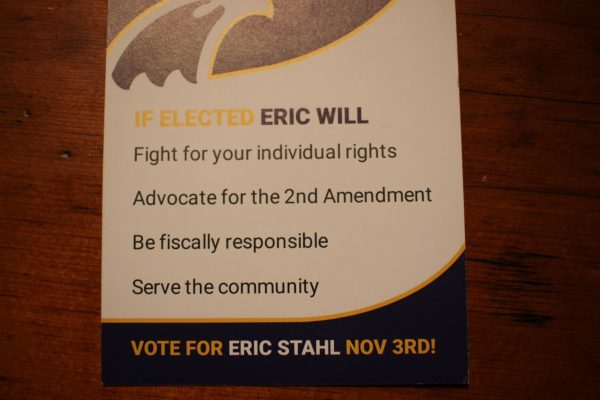 Bonus information.  I heard about this at the local shooting range…  Apparently the current administration left some people less than pleased by avoiding controversy about gun rights.  If the Tazewell County Sherriff agreed, I would sign off on sanctuary status for gun owners in our county.

Its a cornerstone of my beliefs in government.  It might be my inner Ross Perot coming out.  When I was 21 and able to vote for the first time… Ross Perot (Pre Reform Party) had taken his own money and conducted classes on CBS primetime (I think it was CBS?) about the deficit and NAFTA.  He didn’t have much of a bed-side manner… But he got his point across.  We spend more than we bring in.  Federal, State, County, City and some school districts.

Thats was crazy then… And its not gotten any better today!

If you have a business, home or family in an area that’s behind on its bills… You will be paying more for everything when the bills come due.

Mackinaw recently approved reshuffling its bills around a few years ago so that they could levy a loan for the new football field and bleacher complex.   It was on the ballot and passed via a public vote.  I was against it.  Getting out my future telling looking-glass… I was not sure that a town like Mackinaw that depends on some big businesses in Bloomington Normal should be taking out extended loans.  What if, State Farm decided to move its corporate office to a more business friendly state?  (Same question, what if their employees can work from anywhere in the USA like they are during COVID?)  I posted these feeling and you should have seen the hate.  I was not trying to ruin anyone’s scholarship or high school experience.  But you would have thought I was crushing the hopes and dreams of a million kids.

Somebody has to say no.  We can work together and do what is necessary urgent needs appear.  Other than that, we have to work under the belief that revenue growth over the next decade will be negligible at best and error on the side of lowering the budget when we can.

First step…  Remove the pension system from County Board members…  Even the County Board Chair.  (The position I am running for)  These positions are a “service” to the community, not a career.

Like I said in my vide interview with Steve Suess…. Let me be the bad guy!

I know a few people who were into politics from college on… But really… I never jumped into this race as a career choice.  Just as I have done with every volunteer job I have done in the past… I took on this challenge as a way to help and do my part in an organization in the community it serves.  In this case, its to serve Tazewell County.

I am not born and raised here.   But I have spent the last 30 years working in the Pekin area and have now lived here longer than anywhere else in my life.  (Born and raised in Fairbury IL)  I love everything about our county and local communities.  I feel that we all have a stake in the future of the county and should do our part to make sure those who follow us will not pay the price of our inaction today.

Thanks for taking the time to read this “manifesto”???  LOL.  Sometimes I feel like I live a very transparent life… But politics is something I have purposely left offline over the last decade because its not worth arguing over.  Its worth thoughtful conversations, face to face… But its not worth sparring in social media posts or twitter wars.  Nobodies opinion gets changed that way.

Thanks for the support!