Ang was not really hip to going to this thing…  6 months ago Tomi put the screws to her and made sure Ang would be there to participate.  As it turned out…  I think she had a better time than Tomi!  (Although, I am a total 3rd party and my opinion should count for little!)

Friday night was a get together arranged around a street dance.  This weekend was the Delavan Fall Festival.  So, all the stops were being pulled for civic events.

Before the dance, we arranged for Ang and Tomi to have dinner with an old friend… Jenive.  She reminded me of partying in Fairbury at an apartment downtown back in 1990…  I can not recall this for the life of me!!!  As for dinner, for me, it was another great dinner at the Harvest Cafe.    Do  you think I can talk about those guys every week on the blog?  I had a pork loin and some Matilda.  Both were brilliant!  Oh, and the girls had fun catching up on whats going on now.

Later we headed over the dance.  The music was loud.  I saw some people moving around, but am hard pressed to say they were dancing.  The beer was Miller Lite.  I was getting horse from yelling to talk over the Aerosmith covers.  Tomi’s date and I decided to head inside to the bar.

We went in… Saw some decent beer in the cooler… Grabbed some and headed back  outside.  Oops!  The local PD just about took us to the slammer for taking an Erdinger Hefe outside the bar.  Apparently that have an ordinance that you have to drink crappy beer when outside.  I was nice to know that I was being honored for my perseverance later by the installation of a bouncer and a sign saying no booze outside.  For future reference to Delavan… And the Farmhouse…  Miller Light on draft and a few bottles of Zin are not going to be enough to get me to come back!  I’ll sit at the Harvest Cafe and drink some decent beer!

Saturday night was dinner at the Farmhouse.  It was early, but I did see the bouncer eating at the bar!  I knew the rules… So, no trouble from me this night.  We had a decent friend chicken dinner and then the spouses and dates kinda chatted as the classmates caught up.  That was good.  I am still shocked these people have not caught up in 20 years.  Whats up with that? 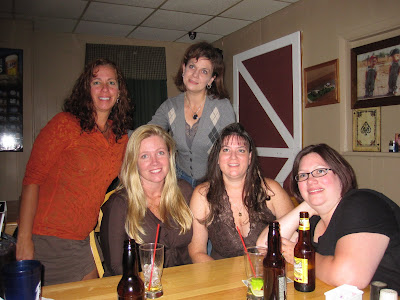 Later we had a few of Angs friends out the house.  TILL 1:30!  Hey, we’re too old for that!  LOL!  It would not have been so bad… Except that the kids had to be up early Sunday.

Sunday we took the kids back to the Fall Festival.  Summer competed in the talent show.  She got 3rd place for singing “Somehwere over the Rainbow”.  She would have gotten 2nd at least if she had not forgotten the words to the song!!!  Poor thing!    I have a video somewhere.  Will post that later.