Its was an interesting day.   I thought I would share.

It was a Friday and I wend down to the Tazewell county courthouse at my appointed time for traffic court.  I was going to ask for court supervision.  I waited about 30 minutes are so to see the “prep” attorneys.  They are like wheeler-dealers of traffic tickets before you see the judge.  I didnt do a head count.  But there was probably 100 traffic thugs like me waiting their turns.

My turn to see the assistant district attorney (If its supposed to be capitalized, I dont care, she doesn’t deserve it) said “I cannot offer you that, we dont agree to that option with the speed you were going.”

I tried to be as diplomatic as possible and said “I would prefer to give an extra fine to the county, than to an increased premium at my insurance company.”  She just hunched her shoulders in a “tough luck” kind of motion.

I told her I was going for supervision.  That meant standing before the judge and hoping for mercy.  Nothing guaranteed.

My group was called in… The judge ran through the rules.  I sat and waited my turn while other cases went before the judge.  They make the “bad” drivers wait till the end of the easily approved supervision cases.  I got to see some REAL menaces to society!

One gal had 4 speeding tickets this year.  She had 2 while under her last court supervision.  When the judge asked why… She said she had just broken up with her boyfriend, and was moving back home.  WOW!  She STILL got supervision… For the 2nd or 3rd time this year!  By the time I calculated what she was gonna spend in fees, classes and previous tickets… I think she is probably 2500.00 deep in speeding tickets this year!  I think her problem stems from more than boy problems.

Another guy went up with his Mom… The judge asked why she was there beside him.  She is not an attorney, and he was not a minor.  So, he has to stand alone.  She said that he might not understand what the judge is saying and needs to help him!

THESE PEOPLE ARE ON OUR ROADS!!!!

My turn.  It came too soon…  I was looking forward to hearing more weird cases.  I was feeling pretty confident that I would escape with supervision.

I gave him the synopsis.  I was speeding.  It was not an emergency.  Unless you call Aidens planned playtime with a friend an emergency.  He might of.  The just actually had a bit of a laugh at that.  So, all was good.  he declared 145.00 and fees.  Seemed pretty good to me! 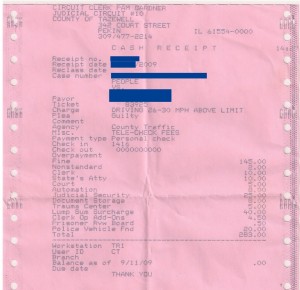 We tried a document storage fee at the dealership and people flipped out.  The only difference here is that the government doesn’t let you go somewhere else if you become disgusted with their service.  I would love to know if this is normal for most counties or states?  Are we typical?

I am not going to complain really hard.   I asked for supervision.  Better to pay for something local than to send it off to the insurance company.

SIDEBAR:  Oddly enough.  This was the second time I was in Tazewell County courthouse on 9/11.  The last time was the attacks of 2001.  I was there for jury duty.  They would not get cable.  So I set up the TV (Since I am one of only a handful of people who use an antenna for TV) in the jury selection room so that other people could see what was going on.  It was very surreal watching the events with 100 or so people that you dont even know.  (Well, I knew a few customers there)