My son called today from Carbondale to tell me he was out of gas…  This was not what I wanted to deal with today. 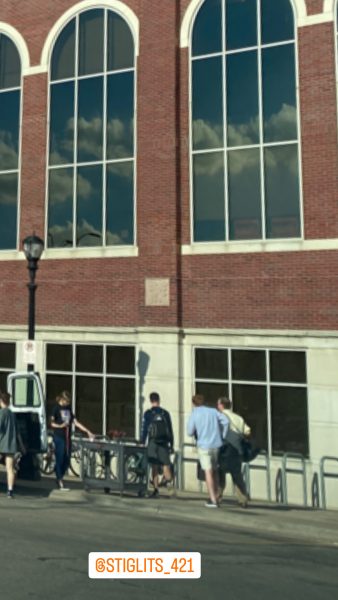 For a quick review…  Aiden gladly took the task of going to Carbondale to retrieve Summer’s RAV4 from its illegal spot in her apartment complex parking garage.  Nate had called ahead to make sure it was not towed, so we were probably OK for a few days… But you never know with summertime staff in a college town.  If anyone one of her friends or roommates could drive a stick shift, this would have been a non-issue!  But her little manual transmission was keeping her car from going anywhere.

The plan was to send Aiden down on the train from Champaign…  Then he and his 2 buddies who came along would stay at Summer’s apartment for the night.  The train was scheduled to arrive at 10PM, so there was no way they were making it back home in a day.  Oh, and this train is always late.  As it was today.  It arrived an hour late in Carbondale at 11PM.

As with everything lately, there was a kink in the deal.  Summer’s roommate had contracted COVID this week.  So that meant our 3 “auto-hikers” were out of a place to stay.  My friend George had called all over to see about a hotel.  You can get married, get a credit card, and sign your life to the army at 18 years old…  But you sure as heck cannot get a hotel room.  We were out of luck.  The train tickets were purchased and time was of the essence… So I made a “Hail Mary” call to my neighbor Andy.

Andy has had a house in Carbondale for his son to go to school for the past couple of years.  I was hoping and praying that he still owned it since his son Kaleb had graduated.

Have I told the story about Andy saving my life on this blog?  Or the time he climbed a massive pine tree to retrieve a drone that we lost?  Did you know he’s my Solar guy?

This dude saves me all the time.   I am actually surprised he answers the phone when I call.  It’s a one-way street.

Andy said the house was still his and he had a kid living there for the summer.  He said they could couch surf for the night and it shouldn’t be a problem.  I informed Aiden that they were staying in a stranger’s house, in a town 3 hours from home with someone they did not know.

This kid has no fear!  They packed bags for overnight and packed some pillows and blankets in case there was no bedding.  I got a text when they got off the train and the next time I heard from them was this call about an empty tank… Somewhere in Carbondale.

Normally, I would assume my kid was screwing with me, but I seem to have lost my BS indicator.  I said, “Your kidding, right?”

“Yeah, I’m just screwing with you…  We just finished breakfast at the diner and are headed to Castle Perilous” said, my son.  In the background, Alex shouted “Hey Mr. Stahl” and then attempted to hang up the phone in a classic gag.  But they botched it.  I sat there waiting to be hung-up on as a prank.   Total misfire.  Then Alex said it again…  “Hey Mr Stahl!”…  Click.  Hung up.

I have a son who would make fart jokes during a nuclear apocalypse.

Thanks to George and Andrea for volunteering Alex and helping out on some of this.  We appreciate it.  One less thing to worry about now.