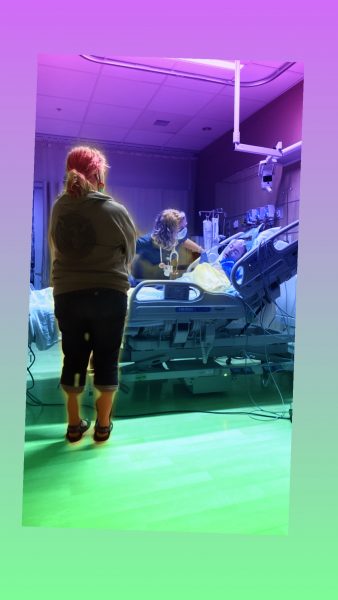 Today was a long one.  We were elated to have a full day with Summer yesterday, but that was prolonging the inevitable.  Surgery had to happen at some point.

We got up at 6, had some Holiday Inn breakfast (it’s the whole reason we are staying here!  Worth 20 bucks a day easy!), and headed to CARLE.   I had texted Summer earlier, to see if she had any news on surgery time.  No answer.  Of course, you fear that they have already taken her.  When we arrived, I walked through her door to an empty bed.  I about freaked.  Fortunately, she was in the bathroom and had just finished up getting out of the shower.  She has been all hung up on not getting a full bath or shower for a week after surgery?  Must be a girl thing.  I’ve gone that long by choice!

At 9:45 the surgery assistants came in and we were able to say our goodbyes.  Fortunately, Mom and Dad made it into the room for a few minutes before they came to take her away.

We were allowed to go down to the surgery doors with her, and then…  She was off on her own.  It’s a surreal moment to be sure.

My folks, Sister, Aiden, and Nate were around for a huge chunk of the day in the surgical waiting room.

Time flew by.  We played games and probably annoyed everyone in the waiting room.  It flew by so much over nearly 12 hours that we were the last ones in the room tonight.  Seriously, Angela and I were there alone in the room till nearly 10PM.

The surgery was long.  Long as they had estimated.  I was hoping that our doctor was a bit of an exaggerator…  He is not.   Doctor Mostaffa came and talked to us around 7PM and gave us the rundown.  He worked to pull as much material out as he could.  He worked longer than he had estimated but wanted to clear all the material possible.

That was the good news.  The bad news is that he believes this is Cancer.  He believes its aggressive and will need radiation after we are through this.

I understand that this is bad news, but for the past three days I have been mentally steeling myself for a much larger “worst-case scenario”.  As far as I am concerned…  We made it through the biggest challenge today.  If we have further treatments, that’s a problem for another day.  Today, we celebrate.

After 10, we finally got to see Summer in her new room in ICU.  Abby, her nurse was poking, prodding, and talking to her.  Summer was still zonked out from anesthesia and it is really hanging on with the 7 hours of surgery.  She will not get much peace tonight.  By design, they will keep double-checking her alertness to pull her out of the medical slumber.  Adding to that, she will be getting another MRI tonight.  Sorry Summer, you will have to sleep later! 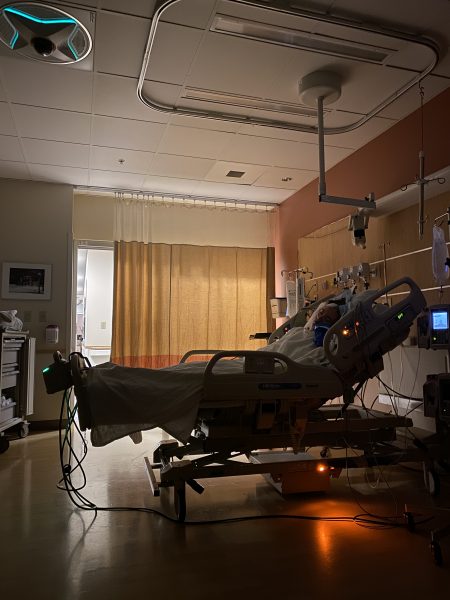 To say our daughter looked at her lowest point would be a bit of an understatement.  There was little question in my mind after seeing Angela’s physical reactions to her incapacitated child that she would be coming to the hotel tonight.  She is totally staying with her daughter.  Rightfully so.  Just in case she wakes up and takes a look around, Angela wants to be there.  She did tell me that when I do my rotation tomorrow that I will have to read to her so she knows we are here.  Imagine Summer’s disappointment when she finds out that my only reading material is a book on Indian Mounds of the Central Ohio Valley.  Say another prayer for her!

There’s a lot more to say, but it’s been a long day.

Thanks again for the prayers… Oh… And thanks to Dominic from work.  He came out and mowed my yard today.  I don’t want to ask anyone for anything, but he demanded to help.  How awesome.  The best part that came out of his adventures in mowing La Finca… He may have come up with a new name for the farm.  The Stahl Maze and Botanical Gardens.  Apparently, our yard has a lot of paths and trees to make it different than most yards.  I guess I never thought about it from an outsider’s view and it makes me smile.  Thanks Dom.