Today was supposed to be surgery day for Summer.  We got into the room at 6 AM and the doc was there a few minutes later. 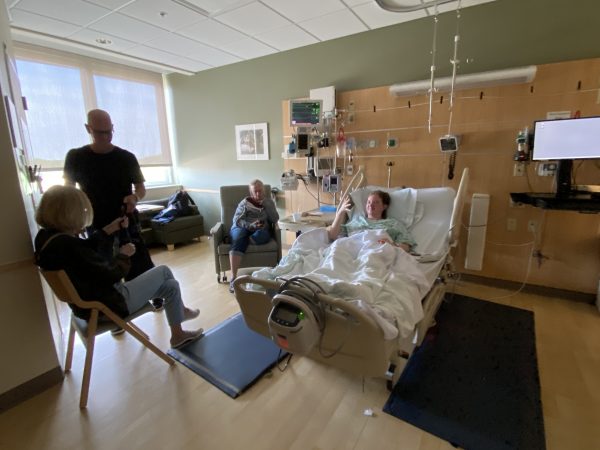 A cerebral hemorrhage was on its way in and Dr. Mostaffa would be hopping on that case.  It was more pressing, and we were not scheduled for today upon arrival on Sunday.  Summer was bumped but without the awesome $500 flight voucher.

Maybe it was for the better?

I had felt really terrible that Aiden and Linda had not had the opportunity to see Summer before her surgery.  Aiden had been talking to her pretty regularly, but still…  Its good to get face to face before something like this.  So, we called him first thing to come over with Linda.

By the time we got to midday, we had my sister, my parents, Angela’s Mom, and Aiden all here at the same time.  Angela and I ran out to make room for the family and pick up some requested items for Sumer.  Hair comb, cleaning wipes, and the kind of stuff you need when you want to look your best while convalescing.

We got back and went down for some lunch in the Carle cafeteria.  Thanks, Joe and Syl for the cafeteria vouchers!  By the time Dad, Aiden, and I sat down to eat…  The ladies arrived as a flock.  The nurse handling Summer’s care had said “enough!”  We were totally breaking all the visitor limit rules.  2 guests at any time are permitted, but they were letting us get away with more people because Summer is young and can handle it.  I would agree that it did get a little overwhelming in thr room. Summer did say she was still getting headaches and was tired.

We broke up the band and said goodbyes.  Ang and I have settled in all afternoon and evening waiting for news of tomorrow’s surgery time.  We did play some card games and as usual…  Ended “Organ Attack” with a fight.  I got crushed in Sushi-Go and we are pretty sure Summer won that one.  (it was my first time playing it EVER)

We waited all night and never heard a clear word.  The Nurses were able to confirm an operating room time of 10 AM tomorrow.  To be fair, Dr. Mostaffa was supposed to be off and I think he was being pulled in a few different directions.  He has been nothing but professional and I trust he will have everything in order tomorrow.

Based on that time, we will arrive at the hospital at 8 AM and update the family when we know the actual operation time.  Again, this operation is estimated at 5 to 6 hours. 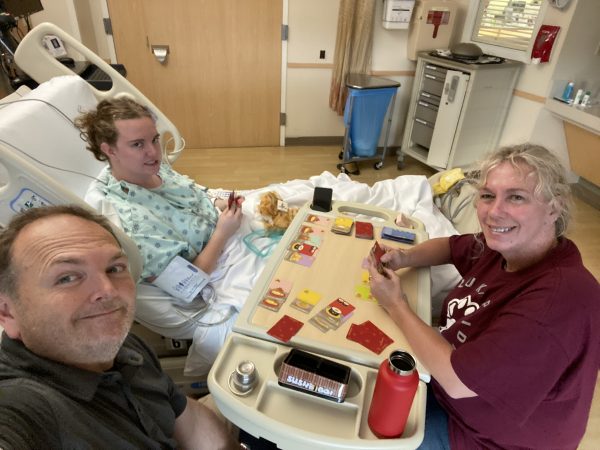 We booked 3 nights at the Holiday Inn Express Urbana as the start to our holding pattern until we understand with ICU will be like afterward.

The support you all sent us was overwhelming.  Thank you.  I heard the voicemails and read all the texts.  I didn’t want to sit on the phone all day, but I did keep looking down after a little bit to catch up.  Love you all.

Praying for a clean and easy surgery and quick recovery.