On our second day in DC…  We stopped by Arlington Cemetary before heading down to the mall.  Again…  It was cold.  I had a hoodie and jacket… I am not sure the kids had gloves.  But, I was sure this was going to be a dud visit because of the weather. 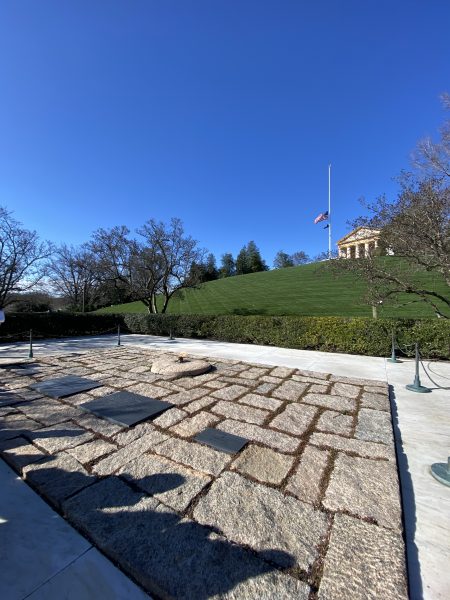 The walk up the hill immediately takes you to JFK’s family burial spot with the “eternal” flame.  The silence sets the tone and its amazing to see a hundred people be completely silent in respect to a former president that was probably killed before 75% of the visitors were even born.

The girls, as usual, wanted Jr Ranger badges.  The only way to do that is to visit Arlington House.  It’s the house that sits on the hill that sits above the Kennedy memorial and looks onto the capital mall across the river. I was ready for this visit to be lame and boring.  Once again… Shocked.  We ran into park ranger Scott Hill who was really into the history of this little house.  George Washington’s adopted son owned the property and his daughter eventually married Robert E Lee.  What?!?!?!  Weird intertangled family histories started making this stop very interesting.  As it turned out, Arlington has a ton of history besides being the national burial grounds as we know it today.

Scott had the ladies go around the house and grab some facts about the house and the families that lived there.   Once back, he then filled in all the blanks.  At one point, he looked at me and said, “Do you know what the house is made of?”.  Ha!  Funny he would ask me.  I had been eyeballing the surface of the pillars and house since we walked up.  I could tell it was faux marble… Stucco?  He said I was essentially correct.  The house was wood but covered to look like stone.

Scott digs his job or does a great job pretending.  This was another example of a guide or park ranger that made a potentially boring stop into something memorable.  How cool is that?