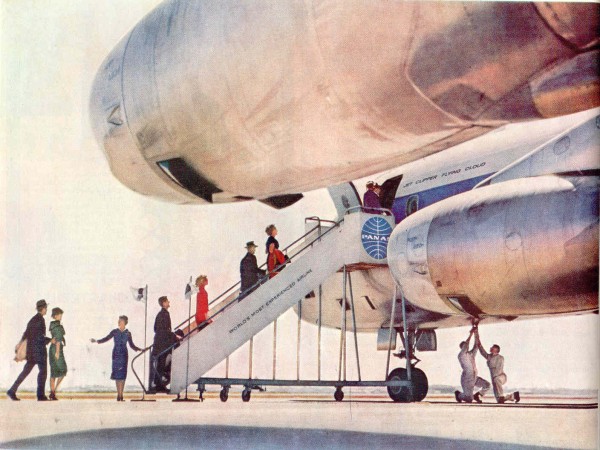 The glory days of air travel

I think I might be becoming a crotchety old man…  I watch things around me and wonder how they got the way they are…  And when I see something that looks unkempt and in disrepair, it really intrigues me.

This past week I flew to Boston for work.  The trip out from Peoria via Atlanta to Boston was on Delta.  I really didn’t have anything to complain about.  Good flight, everyone was nice.

On the way back, I flew from Boston with a connection to Peoria in Chicago.  This flight was on United.  I dont really care to must about airlines other than my self imposed abstention from American…  (They still owe me for making me sleep in the Austin airport, then get me to St. Louis where I had to rent a car for the last leg of the trip.  Even then, I missed an art show with my daughter.)  DIGRESSING!

The trip back was generally pleasant as well.  But, there were few things that started to creep out of my peripheral vision and come into full light.

One, boarding the flight back to Chicago, as we walk down the causeway, as you get to the end of the tunnel, there is a groundsman sitting in a wheelchair (he wasn’t handicapped) silently staring at all of us as well passed by.  He was wearing mirrored cop shades and a hard hat.  It was a really surreal scene.  Im not even sure why I bring this one up.  The impression I was left with after passing him by was “There are some people working really hard to make this flight happen today, this guy is not one of them!”  If its anything like where I work, his co-workers probably feel the same way.

The flight was fine, I did sit next to a dude who smelled a little too much like dogs, but I somehow overcame that during the flight.  The meat of my rant comes from the connection in Chicago.

I landed and ended up at the end of B terminal.  I had about 25 minutes to make my connection.  (Totally my fault, I book these things on Expedia to get home quick!)  I had to get to the F concourse which was all the way over on the other side of the United Terminal.  As I was following their signs to get to F, I followed it to a non-descript staircase that led to a hotel-style shuttle bus that runs on the tarmac.

OK… I have done these before.  No biggie.  What bothered me, was the older woman in front of me.  She struggled with going down the stairs.  Nobody from United offered any assistance.  I was behind her, and she apologized to me about taking so long.  I said to her, “Not a problem, you are doing fine.”  I was carrying my two bags and I did not offer to taker her hand or anything like that.  Frankly, she might have been put off by that anyway.  She wasn’t THAT old.

We loaded the bus.  I didn’t see anyone helping folks with their bags, but I might have missed that.  I am capable and did not need assistance anyway.

When we got to F…

The bus stopped by a back door to the concourse.  A United staff woman as talking in an obnoxiously loud fashion to tell us that this was the stop for F.  I think we all knew that, but she pounded it in just in case.  I know for a fact the driver did not help with bags this time…. I was one of the last guys off. 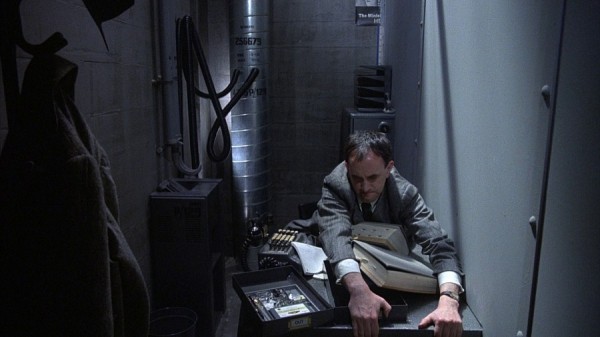 Gilliam’s vision of the future.

When we made our way to the door to F, it was like walking into the back door of a 30 year old fast food restaurant.  Industrial, built to last and not made to be attractive.  The staircase inside was concrete steps with metal risers.  They were a combination of paint and rust.  There were lines, conduits and pipes with fittings running up the walls around us.  I really felt like I was in an old Terry Gilliam movie living out his doom and gloom vision of the future.  Get some paint, build an escalator or something!!! 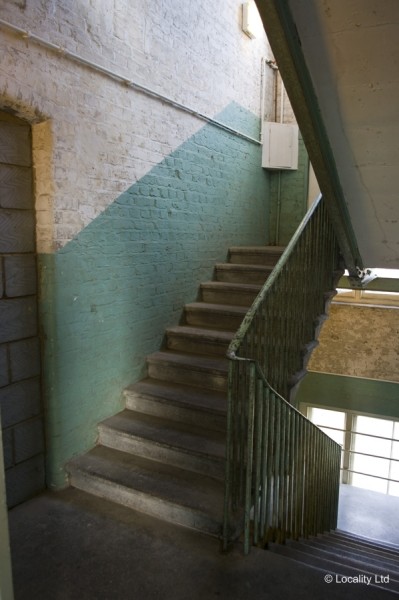 Not the actual steps, but you get the idea.

I passed an older couple that stopped to regroup and take a breath halfway up.

When I got up to the second floor and took a look around…  I was shocked at the 1970’s wormhole that I must have passed through.  Unlike the main concourse, F was a throwback in time. 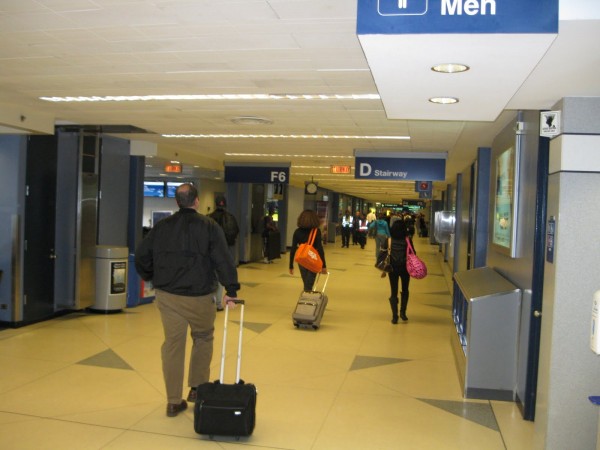 Its cool.  I can handle dated facilities.  I have been to other airports with similar trams and staircases…  But if you stack up bad facilities with staff that dont seem to care about the experience of the travelers…  It starts to smell like someone up higher doesn’t give a crap.

Take a look in the mirror! 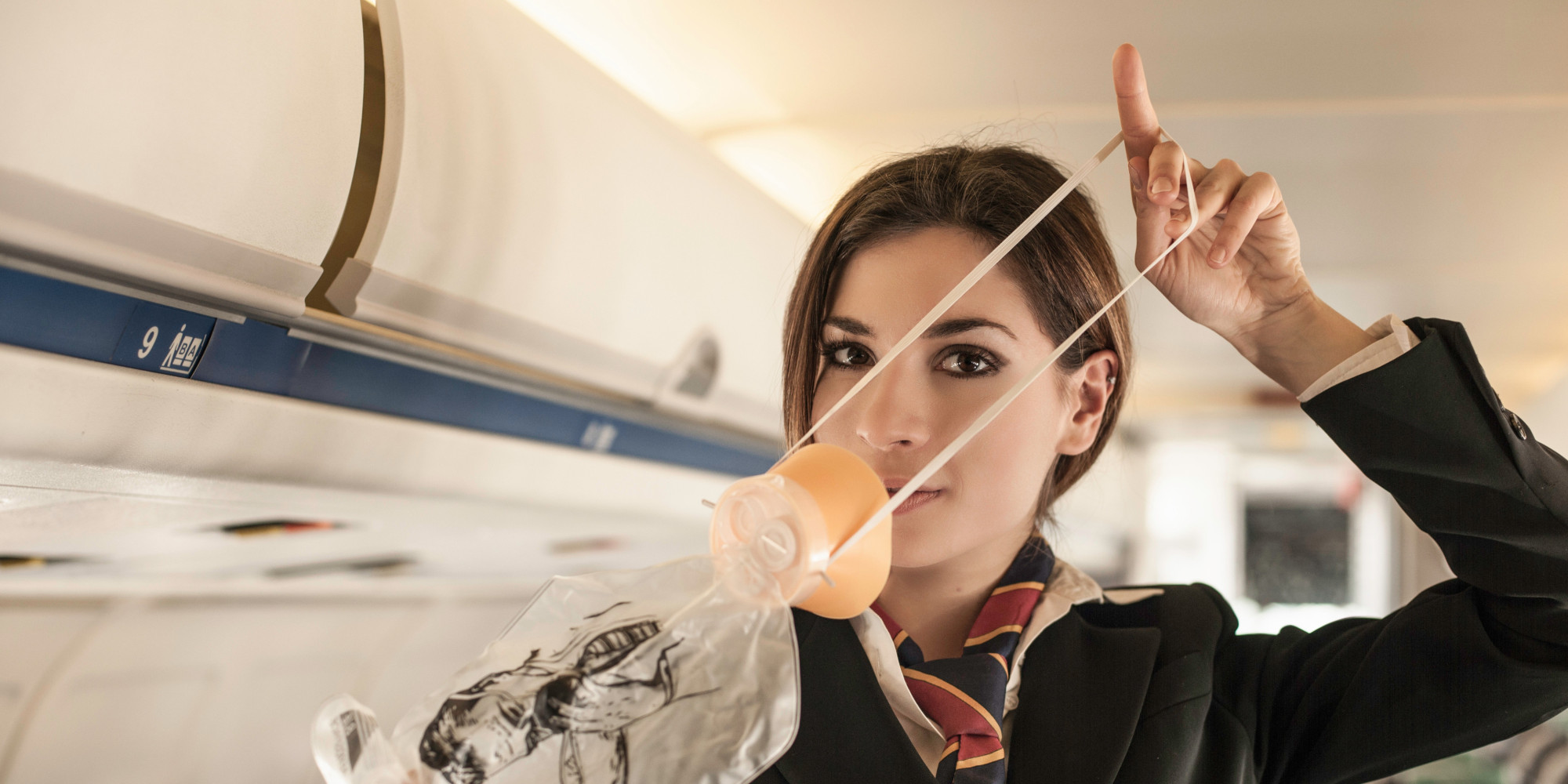 We all know it, but they have to do their job. Show some respect.

To United defense… They were not the only low spot of this weeks travel.  We were fully loaded up in the Express Jet and getting ready to taxi away…  That means the Flight Attendant will go through her 2 minute speech about what to do in the case of a water-landing and where the exits are, etc etc…   As she started to do her job and speak over the intercom… This guy and gal three rows up raised their conversation level up a hundred decibels to speak over her.  It was a small plane, like 12 rows, which made it even more obnoxious.  They were not even looking at her, they were into each other and made it clear to the Attendant that they didn’t give two craps about what she was saying.

It was rude and I felt sorry for the young girl trying to do her job as people act like jackwagons within three feet of her.  We may know what she is going to say, but its still polite to shut up while she is doing her job.   She should have been allowed to taze them.

These folks were headed to Peoria.  I did not recognize them, but I was hesitant to write about it for fear of pissing off someone we all know.  But, you know what, if one of them reads it, lets hope they understand etiquette.  If not, its just another sign of the times.  Everybody is self important…  And like me… They are all critics.

Tweet
This entry was posted in Uncategorized and tagged Air Travel, Expedia, United. Bookmark the permalink.